Back to Godhead > Society > Cow Protection > Milk — Religion You Can Drink

Milk — Religion You Can Drink

Religion You Can Drink

We’ve all experienced the sweet taste and nutritional benefits of milk.
Few of us are aware of its finer qualities.

“It’s fitness you can drink,” say the billboards, as a sportsman goes diving for a ball. The milk ads these days hit us right where we live—the body. For ages, though, India’s sages and scriptures have offered us a spiritual reason to drink milk. From the spiritual perspective, therefore, a more appropriate billboard ad might be: “Milk. It’s religion you can drink.”

What does milk have to do with religion? Let’s go to God’s country—where cows make milk—and find out.

The sun shines on our hillside pasture, green and serene against the morning sky. Bells tinkle where the cows munch fresh grasses and drop their fertile compliments to the earth. Sometimes the cows team up to lick and nuzzle each other, or to tail-whisk the flies. Now ruminating with half-closed eyes, the cows look a little like sages themselves. Their meditation: making milk.

Cows make milk from their blood. The blood carries the products of digestion and absorption to the udder, which changes the raw materials into milk components. To make fifty pounds of milk in a day, a cow must pump some ten tons of blood through her udder. That’s why all the grazing and cud-chewing. But exactly how that grass turns into milk is as mystical as life itself.

“Within your body, by mystic power, you can transform food into blood and tissue,” writes Srila Prabhupada, the Hare Krsna movement’s founder and spiritual master. “Similarly, by mystic power, the cow eats grass and produces milk.”

Scientists say that the chemicals of life vary in their proportion and distribution from one species to another, and that a specific biochemical condition accounts for the cow’s producing milk.

“But who produced those chemicals and that arrangement?” Prabhupada presses. “You cannot produce milk from grass in your laboratory. But the cow can give you milk by mystic power.”

Twice daily our ruminating mystics enter the barn to let down their milk. Giving milk is a function of motherhood; kindly treatment helps the flow. And so our milkers sing to the cows as they go, handling each mother with care as they draw the sweet liquid from her body. From nature’s lab comes miraculous milk. 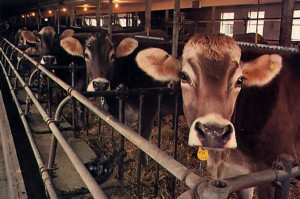 The single most important article of food for the maintenance and health of both child and adult,” proclaims The Mother’s Encyclopedia. “The most valuable food we have,” advises the Red Cross. “Contains almost all the food elements that the human being needs,” says Dr. Spock. All the elements a milk marketer needs, too. Hence the blizzard of ads. We are reminded that “you never outgrow your need for milk.” We are encouraged by some athlete with milk on his upper lip to “wear a moo-stache.” We are exhorted by trim, glamorous movie stars to drink milk and “be somebody.”

“Hold on!” the sages announce. “You’re not that body; you’re the soul within. If you miss that point, you’ll miss all others—like the spiritual value of cow’s milk.”

Take it from the sages—cow’s milk is God-given nectar. It fortifies the body and develops the brain’s finer tissues as well. By filling us with goodness, milk clears the consciousness so we can consider higher, spiritual life.

In ancient India, early in the morning at milking time, the sages would approach the dairymen for a pound or two of milk. The villagers would welcome these holy men, who would enlighten them with sublime, spiritual knowledge. Their inspiration: Lord Krsna, the Supreme Personality of Godhead.

“As the sun alone illuminates all this universe,” says Krsna in the Bhagavad-gita, “so does the living entity, one within the body, illuminate the entire body by consciousness.”

Consciousness is the symptom of the soul. Though we cannot see the soul inside the body, we can perceive its presence by consciousness. During the dawn milking, we can’t see the sun, but we can perceive its presence by the early light. Similarly, the presence of an individual consciousness illumining all living bodies—whether man or animal—indicates the presence of the soul. Each soul, though divine, displays different powers according to its bodily circumstance. The soul embodied as a cow, for instance, can turn grass into milk. And the soul embodied as a human being can turn his consciousness toward God.

It’s natural to remember God in the country, whose beauty reflects His eternal kingdom. The Bhagavad-gita and other Vedic literatures describe the kingdom of God as a spiritual wonderland, where everything is possible in loving service to Krsna. The “desire trees” there yield any fruit upon request, and the surabhi cows, beyond the constraints of flesh and blood, give a limitless supply of milk. The Lord keeps many such cows, and in His transcendental form as a cowherd boy. He herds them.

“Lord Krsna and His cowherd friends entered the forest to enjoy the new, seasonal atmosphere,” the sage Sukadeva relates in the Srimad-Bhagavatam. “The cows, being fed by new grasses, became very healthy, and their udders were all very full. When Lord Krsna called them by name, they immediately came to Him out of affection, and in their joyful condition the milk flowed from their udders.”

Sadly, though, the cries of the cows in the modern slaughterhouses mock the country’s reflection of Krsna’s peaceable kingdom. We’ve heard that “man is made in the image of God,” and so we hold human life sacred and religiously protect a person’s right to live. But the cow, made in the image of the Lord’s beloved surabhis, also protects us by supplying us nourishing milk. Shouldn’t we protect her, too?

Srila Prabhupada comments, “By God’s grace, the innocent cow is simply eating grass and supplying the finest food, milk. The cow’s blood is very nutritious, but a civilized person uses it in the form of milk. From milk, we can make so many things—yogurt, cheese, butter—and by combining these products with fruits, vegetables, and grains, we can make hundreds of wholesome preparations. That is civilized. Not spilling the cow’s blood in big slaughterhouses and eating her flesh.

“So protect the cow,” Srila Prabhupada continues. “Don’t be ungrateful. That is Krsna’s advice. From infancy, we are drinking the cow’s milk, and if in return we cut her throat, that is barbaric, less than animal. Even an animal respects its mother. But the ‘civilized’ men are doing that—killing mother cow. And they want peace. Just see the fools. They are less than the lowest animal.”

The message is clear. Milk—a product of the cow’s goodness—enriches human consciousness. Meat—a product of man’s ignorance—degrades it. That’s why meat-eaters, even if they drink milk, cannot understand the Supreme Personality of Godhead.

So draw your nourishment from the cow, say the sages—not by spilling her blood, but by drinking her milk—and listen to the messages of Godhead. There’s a limit to the amount of milk you can drink, but there’s no limit to how much you can hear about Krsna. And the more you hear, the more you grow in spiritual understanding. Such is the milk of Krsna’s kindness. And that’s religion you can drink forever.

One Response to Milk — Religion You Can Drink