Back to Godhead > Science > On Real Intelligence 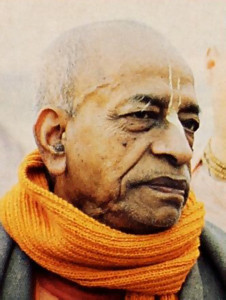 The following conversation between His Divine Grace A.C. Bhaktivedanta Swami Prabhupada and some of his disciples took place in May 1975, during an early-morning walk in Melbourne.

Devotee: Srila Prabhupada, I read in one of your books that one way we can learn about God is through a process called anumana. What is that?

Srila Prabhupada: Logic. For example, as soon as we see a machine, we know there must be an operator of that machine. This is logic. You cannot expect the machine to work without an operator. Similarly, this material nature is a machine and the operator is God. Even though you cannot see God, by logic you can know He exists. This is human reasoning.

But the atheistic scientists will not accept this simple argument. Even an ordinary typewriter cannot work automatically; it requires an operator to push the buttons. Then how can this big machine of the material nature work without an operator? What is this nonsense!

The scientists say, “There is no God. Everything is working by the forces of nature.” But what is nature? Nature is simply a machine, just as our bodies are machines. The operator of the bodily machine is the soul, and the guide is the Supersoul, Lord Krsna in the heart. As soon as the soul goes away from the body, the bodily machine stops working. And the same is true for the machine of the material nature. It does not work without an operator. But the so-called scientists have no common sense to understand this logic. Therefore they are rascals.

Devotee: Who is the greater rascal, the material scientist or the ordinary atheist?

Srila Prabhupada: Anyone who does not accept God is a rascal. That is Krsna’s statement in the Bhagavad-gita [7.15]: na mam duskrtino mudhah prapadyante naradhamah. Who doesn’t recognize God? Those who are sinful rascals, the lowest of mankind.

Now, someone may say, “No, the scientists are so educated.” But that education is false education. Real education means to understand God. Vedais ca sarvair aham eva vedyah.

If one does not understand God, his education is useless. It has no meaning. When someone claims to be educated, we should simply ask, “Will that education save him from death?” If not, then what is the value of his education? Our real problems are birth, old age, disease, and death. Can materialistic education solve these problems? Can the scientists stop anyone from growing old? Nobody wants to become old; everyone wants to keep himself youthful. But no scientist can stop old age. Then what is the value of the scientists’ education? We acquire an education so we can solve our problems. The scientists are solving only temporary problems, but they cannot solve the ultimate problems. Therefore their education is useless. Srama eva hi kevalam: it is simply hard labor for nothing. That’s all.

Devotee: The leaders seem to have adopted a stop-gap policy. They keep the people in ignorance and fool them into believing progress is being made, when actually it’s not. In this way the leaders can maintain their position.

Srila Prabhupada: Yes, the blind leading the blind: andha yathandhair upaniyamanah. The leaders tell the people that by material adjustments they will be happy. But that is not possible. Still, the people are such fools that they do not think, “Where is the solution to my problems? You have given me the chance to live in a skyscraper building, but is that the solution to the problems of birth, old age, disease, and death?” No one has brain enough to ask this question.

Everyone is trying to save himself from disease, from old age, from death. Why do people go to a physician as soon as there is some disease?

Devotee: They want to get well.

Srila Prabhupada: Yes. And ultimately, they do not want to die. But even if you have the best physician, death will eventually come in any case. Then where is the solution to the problem of death?

Still, people accept science as the solution to all their problems. Therefore the Srimad-Bhagavatam [2.3.19] says, sva-vid-varahostra-kharaih samstutah purusah pasuh. “Those who are like dogs, hogs, camels, and asses praise leaders who are also like animals.” Both the leaders and their followers are animals; none of them is a human being. The big animal bluffs, “I have done so much for you, and I promise to do more. Give me your vote.” And the small animal thinks, “Yes, he has done so much for me. Let me vote for him. “This is going on. Andha yathandhaih: one blind man is leading other blind men. What is the use? If I am blind and I say, “Come follow me and I shall take you to Melbourne,” as soon as we go in the road, I will be killed and you will also be killed. That’s all.

Devotee: Srila Prabhupada, sometimes when we tell people this life is full of miseries, they say, “What do you mean? There are high points and low points, but basically I am a happy person.”

Srila Prabhupada: That is their foolishness. They cannot distinguish misery from happiness. They are being kicked by material nature, the agent of Krsna. Because they are desiring in various ways to become controllers or enjoyers, they are being offered various types of bodies and suffering repeated birth and death. But because people have no sense, they think this material life is pleasurable.

Now, as Australians, you may have so many nice facilities, but you cannot enjoy them perpetually. By the force of nature you will have to change your position. Today you may be living in a nice apartment, and tomorrow you may become a rat in that apartment. It is not in your power to change the strong laws of nature. You must change your position.

Actually, everyone is being controlled by the material nature at every moment. So an intelligent person asks how to get out of this material nature, how to end the suffering of repeated birth, old age, disease, and death. And Krsna explains how to end this suffering in Bhagavad-gita [7.14]: mam eva ye prapadyante mayam etam taranti te. “As soon as the rascal surrenders to Me, he is out of the control of My material nature.” Surrendering to Krsna is real intelligence.