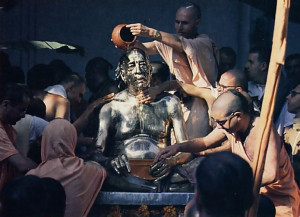 Devotees from JSKCON centers around the world lovingly bathe the large brass murti of Srila Prabhupada.

Vrndavana, India—On November 6, 7, and 8, hundreds of ISKCON devotees and guests attended the dedication here of a memorial built in honor of His Divine Grace A.C. Bhaktivedanta Swami Prabhupada, the founder and spiritual guide of ISKCON. Vrndavana is one of India’s most revered holy cities and the site of the internationally known Krishna-Balaram temple, which Srila Prabhupada opened in 1975. The two-story marble memorial, complete with ornate balconies and winding staircases and featuring photo and sculpture exhibits, stands adjacent to the Krishna-Balaram temple. 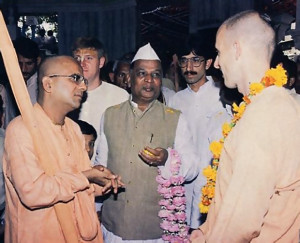 His Excellency Mr. S. B. Chavan, Minister of Planning for India’s central government, was the guest of honor at the dedication ceremonies. He and Mr. Ghorpade, a member of India’s parliament, delivered speeches praising Srila Prabhupada’s unique achievements in distributing India’s rich, spiritual heritage all over the world.

The highlight of the dedication ceremony came when devotees visiting from ISKCON centers around the world bathed and dressed a larger-than-life-size murti of Srila Prabhupada. In this murti form Srila Prabhupada now presides over the memorial temple complex, receiving regular daily worship from his disciples and grand-disciples. 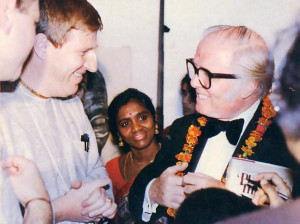 Sir Richard Attenborough, producer-director of the Academy-Award-winning film Gandhi, talked with Dhananjaya dasa, ISKCON’s director of public affairs for the United Kingdom. The occasion was the opening of a photo display on the life of Gandhi at the Indian Cultural Center in London. Folding his hands and saying, “Namas te” [a respectful greeting], Sir Richard accepted a garland and a copy of the second volume of Srila Prabhupada’s biography, Planting the Seed, and expressed interest in visiting Bhaktivedanta Manor, ISKCON’s country estate near London.

One Response to Opening of Srila Prabhupada’s Samadhi in Vrindavan