Back to Godhead > Prabhupada > On Nudity and the Hoggish Life

On Nudity and the Hoggish Life

On Nudity and the Hoggish Life 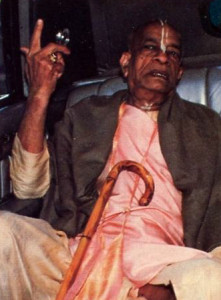 The following conversation between His Divine Grace A.C. Bhaktivedanta Swami Prabhupada and some of his disciples took place in March 1975 in Dallas.

Devotee: But they argue that if God wanted us to wear clothes. He would have made us with clothes.

Srila Prabhupada: The Visnu Purana explains why we have to work:

This is a definition of the three divisions of God’s energy. One energy is the internal, spiritual energy. Another energy is the marginal energy—the living entities, who are also spiritual. And the third energy is the external, material energy, where there is ignorance and work. In the material world, everyone is ignorant, and they have to work.

So, the people of the modern civilization have simply increased their work. They call it civilization, but it is actually just like a prison house, where you have to work. They are thinking that to work constantly is civilization. So they have created more work: from early morning, five o’ clock, till ten o’ clock at night they are simply working. They do not know that this working is their punishment. Because they’re ignorant, they think that working is life. Instead of decreasing work and saving time for self-realization, they increase their work and complicate life. This they call advancement of civilization, but it is actually avidya, ignorance.

Our tendency is not to work but to get things freely. That is why we sometimes hear that question: “If God wanted us to wear clothes, why has He not created us with clothes?” This question shows that our tendency is not to work. And that is a spiritual tendency—to want all our necessities to be automatically available. This is why we see that as soon as a man becomes rich, he generally gives up work. He gets his things by having others work for him. So the human tendency is to retire from work.

Devotee: Many people would disagree with you. They think that to be unemployed is one of the worst things that can happen to you.

Srila Prabhupada: Man is not meant to work like an ass all day long. Real civilization means to minimize work, save time, and cultivate your spiritual life. That is civilization—not to work like a hog or a dog for sense gratification. That kind of life is condemned in the Srimad-Bhagavatam [5.5.1]: nayam deho deha-bhajam nrloke kastan kaman arhate vid-bhujam ye. Human life is not meant for working very hard for sense gratification, which is done by the dogs and hogs. Human life is meant for austerity (tapah). Why austerity? To purify your existence (yena sattvam suddhyed). Then you’ll get unlimited pleasure (yasmad brahma-saukhyam tv anantam).

We are all seeking unlimited pleasure. But that is not possible in this material life. Unfortunately, people do not know this, so they are working very hard like hogs for a little happiness. The hog works day and night, searching out stool. And as soon as he gets some stool he becomes stout and strong. Then—sex with the nearest female. Never mind whether it’s his mother, sister, or daughter. This is hog life.

So, human life is not meant for imitating the stool-eating hogs. But people of the modern society are imitating them: “We shall work hard, eat whatever we like, and have as much sex as we want.” They have no discrimination in the matter of food: they eat all sorts of nonsense. And in this way they grow very strong and have sex, even with their sister or daughter. The Bhagavatam warns that this is not human life, but this has actually become the life of many modern, “civilized” men.

Devotee: But if people didn’t work hard, how could things go on? Wouldn’t there be an economic crisis?

Srila Prabhupada: No. Lord Krsna tells how we can make our life very comfortable: Just produce some food grains, vegetables, and fruits, and take the milk from the cow. All your economic problems will be solved. And even if you don’t produce food grains and vegetables, you can still live on fruits and milk. But no, modern man takes the source of milk—the cow—cuts her throat, and eats the meat. This is civilization?

Therefore they must suffer very severe reactions—war, famine, earthquakes, and so on. (To be continued.)