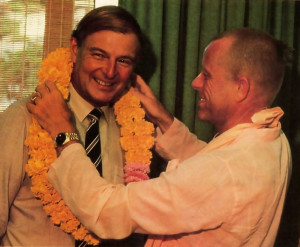 Murwillumbah, N.S.W., Australia—A meeting with the acting prime minister and the opening of a long-awaited bridge highlighted a recent festival at the Hare Krsna farm community here. Before the devotees built the 200-foot bridge, anyone visiting the farm had to reach it by driving up a rugged dirt road or fording a shallow creek. But now the bridge connects the farm to Tyalgum Road, a major highway, so that guests can easily reach the community and the devotees can bring in heavy vehicles to develop the land.

Although pressing duties prevented Acting Prime Minister Douglas Anthony from attending the ceremony, a meeting at his nearby residence did take place with Srila Bhavananda Goswami, a leader of the Hare Krsna movement who initiates new devotees in Australasia.

“The Hare Krsnas have certainly brought a lot of color and life to the district,” said Mr. Anthony. They are “full of joy and love.”

Elsewhere in Australia, the government of the state of Queensland officially recognized the Hare Krsna movement as an authentic faith. Premier Joh Bjelke-Peterson said he “appreciated and respected the Krsnas for their prohibition of drug-taking, illicit sex, and drinking.”

Martial Law No Bar to Hare Krsna Festival in Bangladesh

Dacca, Bangladesh—Even martial law and a depressed economy couldn’t dampen the spirits of the leading citizens who gathered by the hundreds recently at a ceremony to honor the Krsna consciousness movement and its founder and spiritual guide, Srila Prabhupada.

Dr. Parash Nathmondal, head of the Sanskrit department at the University of Dacca, described his recent visit to Hare Krsna centers in the West and then told the assembly, “The Krsna consciousness movement sets the standard for devotional purity. I recommend that everyone give it full support.”

Later, Srila Jayapataka Swami Acaryapada, who oversees the affairs of the Hare Krsna movement in Bangladesh, spoke about the philosophy of Krsna consciousness and the activities of the movement throughout the world. American-born, Srila Jayapataka has become an Indian citizen and learned to speak fluent Bengali. The assembled devotees were greatly pleased when he addressed them in their native tongue.

A life member is a devotee of Krsna whose family and business commitments prevent him from living and working full-time in a Hare Krsna temple but who gives a substantial donation to help spread Krsna consciousness. His contribution goes toward printing and distributing books of transcendental knowledge, maintaining Hare Krsna temples, distributing sanctified food, and so on. Life members enjoy benefits that range from free accommodations at ISKCON centers to sets of books by Srila Prabhupada.

For more information on life membership, get in touch with your local Hare Krsna center.

New Vrindaban on the Map

New Vrindaban, West Virginia—Although Srila Prabhupada’s Palace of Gold was one of the three most popular places to visit in West Virginia last year (more than 300,000 guests), people planning a tour couldn’t find New Vrindaban, the site of the Palace, on the map. Apparently state authorities got wind of the problem: New Vrindaban is now on the official map of West Virginia, published by the State Highway Department.