Back to Godhead > Prabhupada > The Dis-United Nations — Srila Prabhupada

On the Dis-United Nations 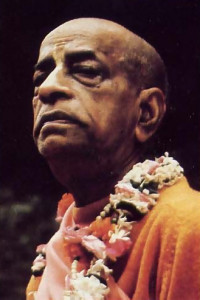 Mr. Sharma: I think the United Nations would be at a loss to tell you.

Srila Prabhupada: So, people have become very dull in spite of their so-called education.

Even from the practical point of view, they are unable to accomplish anything. The original idea was to stop war. But there have been so many wars, and they cannot stop them. They call themselves the United Nations, but actually they are becoming disunited more and more. According to the Bhagavad-gita, if they actually want peace they must know that Lord Krsna (the Supreme Personality of Godhead) is the supreme enjoyer (bhokta), that He is the supreme proprietor (sarva-loka-mahesvaram), and that He is everyone’s friend (suhrdam sarva-bhutanam). When they know this, Krsna says, then there will be peace. Otherwise, their big conferences in big offices will never be successful.

Mr. Sharma: That means everything belongs to God. That’s the one fact they want to avoid.

Srila Prabhupada: Yes, that is their nonsense. The United Nations is simply an association of the cheaters and the cheated. Someone wants to cheat, and someone is being cheated. That is our opinion. So how can an association of cheaters and cheated do any good for human society? They are cheaters. They do not know how to attain peace, but they are claiming that they will bring peace to the world. Therefore they are cheaters.

Mr. Sharma: Well, many people will say that the only things that matter are those that can be rationally explained. Anything else is beyond reason—

Srila Prabhupada: But our argument is quite reasonable. Everything in this room has been created, Isn’t that so?

Mr. Sharma: The creator, of course.

Srila Prabhupada: So why are they claiming, “This is my country”?

Mr. Sharma: Are you saying that the United States, for instance, doesn’t belong to the Americans?

Srila Prabhupada: Yes. It doesn’t belong to them. Yet these rascals are claiming, “This is mine. This is my flag.” Therefore, they are all cheaters. And they are combining and trying to cheat others. The Americans are thinking, “How can I cheat the Russians?” And the Russians are thinking, “How can I cheat the Americans?” Is that civilization—to become cheaters and waste time in so-called conferences? Is that civilization?

Srila Prabhupada: In America they cheated the red Indians. They got the land, and now they are claiming, “It is mine.” Well, where did you get this land? You cheated the red Indians, and now you claim it is your land. All over the world this is going on. Napoleon thought, “France is mine.” So, France is there, but where is Napoleon? Where is he living now? In France or in hell or in heaven? There are so many places and so many forms of life. In this body, in this life, I may be working as a nationalist—as a Napoleon or as a Gandhi or as someone fighting in the United Nations. But as soon as this body is finished, I’ll get another body. So the whole duration of my previous life is simply wasted.

Srila Prabhupada: Simply wasted. They are simply wasting time. They don’t have perfect knowledge—simply some Utopian ideas. And they are passing as advanced in civilization. They should know what the purpose of life is—what our relationship is with this cosmic manifestation. There must be a creator. So who is that creator? What is my relationship with Him? But they are neglecting all these things and still passing as world leaders.

Mr. Sharma: That’s the worst kind of government. It seems that their standard is just as you’ve said: every nation for itself.

Srila Prabhupada: But a human being can get out of this illusion. There is sufficient knowledge, especially in the Vedic literature. So why don’t they take advantage of this knowledge and make their lives successful? That is my proposal. We are spreading this Krsna consciousness movement only for this purpose. These people are missing the point and unnecessarily wasting their lives in illusion. So we are trying to save them—that is our Krsna consciousness movement.