London—Last summer, thousands of tourists sightseeing in the center of this city may have been more than a little surprised to see a forty-foot-high, gaily decorated chariot being pulled around a corner onto Park Lane by scores of chanting and dancing Hare Krsna devotees and their friends. But surprise soon turned to delight as the procession drew closer, the bright red-and-yellow canopy towered above, the music grew louder, and the wooden Deity forms of Lord Jagannatha, Lord Balarama, and Srimati Subhadra became visible sitting upon their thrones within the chariot. It was London’s annual Ratha-yatra Festival. 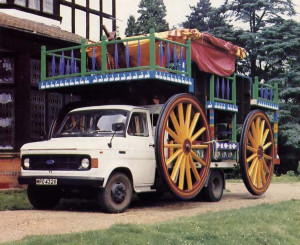 The chariot has been compacted and hoisted onto a truck for the trip to the next festival.

The chariot (modeled after those used every year in Puri, India, where Ratha-yatra is an ancient tradition) rolled down Park Lane along Picadilly Circus to Trafalgar Square. All the while, devotees riding threw packets of prasadam (vegetarian food offered to Lord Jagannatha) into the eager hands of the crowd. Srila Bhagavan dasa Goswami, who oversees the affairs of the Hare Krsna movement in Great Britain and initiates new disciples there, led the chanting of Hare Krsna and later spoke on Krsna consciousness to five thousand people gathered around Nelson’s Column.

After the talk the celebrants enjoyed performances by children from the local Hare Krsna gurukula school. The children recited beautiful Sanskrit verses from memory and then staged a drama about Lord Caitanya, the divine incarnation who pioneered the Hare Krsna movement in India five hundred years ago. The high point of the festival for many was the free feast—one and a half tons of prasadam cooked by the devotees and relished by the festival-goers. 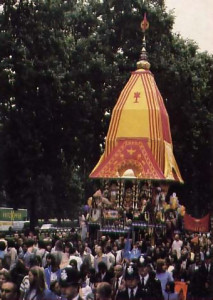 The London Ratha-yatra is only the first in a series the devotees will hold in England this year. The people of Birmingham, Brighton, Bristol, Manchester, and Glasgow will also get to see Jagannatha’s chariot rolling down their main thoroughfares. What makes it all possible is the ingenious design of the chariot itself. It was built by Mayesvara dasa, a highly skilled designer-builder with several years’ experience constructing chariots for Hare Krsna Ratha-yatras in Calcutta and Bombay. In only two hours devotees can bring down the canopy on a telescopic winch, sink the struts into one another, fold the sides up, and slide in other sections, thus making the chariot so compact that it can be jacked up and hoisted onto the bed of a truck.

Comments Mayesvara, “Srila Prabhupada was the first devotee ever to take Ratha-yatra out of India and bring it to people who’d never seen it before—the residents of the big cities in the West. I’m sure he’d be pleased to know that we can now build portable chariots and start bringing Ratha-yatra to smaller cities and towns as well. After all, Jagannatha means ‘Lord of the Universe,’ so Ratha-yatra is for everyone.”

Ethiopians Can Now Read About Krsna

London—Forty million Ethiopians will now have a chance to read a book about Krsna consciousness: The Teachings of Prahlada Maharaja. The new book has been translated into Amharic, a language that dates back to biblical times, and published here by Vanki-vihari dasa, a native Ethiopian. Hari-vilasa dasa, of Spiritual Sky Products in France, made a generous donation toward the publication.