Back to Godhead > Society > Sinful Activities > The Rothschilds — Privilege Declined 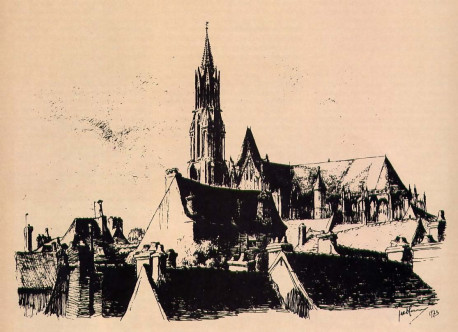 YOGESVARA DASA, a devotee of Krsna for thirteen years, is a contributing editor for BACK TO GODHEAD magazine. He is also head of Bala Books, which publishes Krsna conscious literature for children.

My landlord is a descendant of the Rothschilds, that complex genealogy of European aristocrats who have been accused of everything short of cannibalism, including the takeover of the world by manipulation of their vast fortunes. Well, my landlord falls short of Napoleonic in his ambitions: his are triumphs of the simple. Granted, in our touristic French village there are few houses to match the nobility and gilded decor of his; but he has no desire to buy up the rest of the village or extend his power beyond the hundred or so walls of his humble empire.

Since we live in houses that face each other, I see him sometimes in the early morning, standing proudly at his window, breathing in deep drafts of fresh country air. From what I have seen of the inside of his mansion, he favors Louis XV furniture, fine satin draperies, and chandeliers of Austrian crystal. His elegant living room is lined from cashmere carpet to frescoed ceiling with handsomely bound books, heavy with gold embossing and hand-engraved designs. He loves to open wide the door of that great room as though drawing open the curtain on some lavish theatrical presentation, yet he has the reserve and good judgment not to stare at his guests, whatever their reaction may be to the drama of wealth and power unfolding before their eyes.

He likes the cultivated forms of nature and prides himself on the neatly trimmed lawns and brilliant flower gardens of his great estate, lined with shrubbery pruned into shapes. Although he’s well into his fifties, he wears his age nobly. Yet his neck is not stiff nor his eye hard, for he has seen the price men pay for pride and arrogance, and he is careful to respect the integrity of a person’s labors, however humble his station. In fact, nothing so satisfies him as to loaf upon the cool veranda of his club and talk about the world with anyone and everyone, to joke and laugh, and drink aged Scotch.

After my return from a recent trip to India, I presented him a two-foot-square painting of Krsna in royal blues and gold, a fine piece of work in traditional Rajasthani style on silk. He looked admiringly at the painting.

“You know,” he said, looking up with an air of seriousness he assumes at such moments, “you are a lyrique, my friend—intelligent, and despite your mystical affiliations” (he leaned forward as if to share with me some deep secret) “a man of good taste.” And with that he chuckled heartily, satisfied as much by his own remarks as by the gift.

Well, such is my landlord. He has seen the sun setting on the Riviera, smelled the wet, fresh earth of Brittany after the spring rains, felt the surge of admiration ripple across the social halls of Paris as he enters with his lovely young wife, heard the whistle and whine of the Concord as he jets across the Atlantic. No Napoleon is he, no strong face burning East. Yet, in some remote corner of his being, a lyrique himself, a sprig off the upper branch of French life. A thinker of dull thoughts, for the most part, but poetic in their expression.

When we met that day, I felt the detached curiosity a devotee may sometimes feel when confronted by the other life, the life of privilege he might have known had fate not stepped in and introduced him to the eternal message of the Bhagavad-gita. Was it all so bad, the life my landlord knew? Could I not learn to enjoy the world of privilege as he did, better equipped as I would be with the knowledge of how far to go in the pleasures of the mind and flesh? Could there not be for me, too, a portion of life’s bounty as the world knows it, or were my vows of spiritual discipline unretractable, too firm to allow me to rejoin the familiar world of family, society, and love?

The vision of what might have been filled my horizon as I left his house that day. What kept me from reaching for the other life my visit had brought so sharply into focus was in part its philosophical and spiritual deficiencies. But it was more the utter resignation, the capitulation such a life would demand. Most people I knew who lived for the world of the senses so lacked individual distinction that each seemed a small particle of some immense, nondescript lifestuff rather than an eternal spiritual being, capable of feeling and inspiring others to feel the mystery of the creation.

But there was something more as well.

After leaving my landlord’s house I went for a stroll in nearby Jean Jacques Rousseau Park, and there I saw two attractive girls cantering gaily about on dark chestnut horses. Two well-groomed young men escorted them on bays. Responsive to the reins, the horses pranced and strutted. The carefree picture set against the immense countryside was like a mockery, the fruit inches away from Tantalus’s lips.

I was fascinated by the scene. As far as the distance would allow, I began examining the faces of the riders, trying to penetrate the social masks they wore, probing, searching as for some clue. I knew the young men. They had been at a reception my landlord had given for new residents of our village. We had spoken of India, of Krsna, and of the search for one’s spiritual self. They had listened, politely, nodding at the appropriate times—yes, surely such an interest was needed for a balanced life. But their speech was casual, social, for they already knew everything and had seen everything, and now they received every new intelligence with an amused look in their eyes. Nothing shocked them any more. Not death, not old age, not all the signs thrown by nature to warn us of our own mortality. It was the way things were. It was what they had come to expect of life.

Ah, there it was. It was not so much what they did that made their life impossible for me, for I also traveled and met people of importance and occasionally even rode a horse. It was their attitude of acceptance, their complacence about themselves and about their life, their lack of faith in anything better. I could not, would not ever come to that. For me the utter simplicity of soul, of self beyond matter, would remain a constant source of wakefulness against approaching lethargy or other dangers. I remembered an example my spiritual master, Srila Prabhupada, had once used to describe the attentiveness of a devotee. Samurai warriors, he described, were trained by their martial arts guru to sleep so lightly that the slightest sound would wake them and put them on guard. At night the guru would silently creep up and bring a bamboo switch swiftly down across the disciple’s legs. It would get to the point where the disciple could hear the swish of his guru’s stick, awaken, and roll instantly out of range before the switch hit the ground.

Yes, that was it, the core of the problem. Could I as a devotee belong to this world of privilege without taking upon myself the apathy and burden of that privilege? Could I ever speak truthfully of the material world as I had learned to see it, help others awaken to its snare of illusion, and at the same time belong to this world of which I would have to speak? Were the two things possible? Would not the very fact of living to see my own ambitions fulfilled come between me and the truth of my eternal self, first as a shadow, then as a virtual wall? And would I then be any different from the vast camps of others who had let themselves be captured by false visions of wealth, ease, pleasure, by the deadly honors of profit, adoration, and distinction?

That was the danger, and it was real enough. I thought of the people I had known who had come close to the full, whole life of devotees, who had shown the promise of genius and then had left that promise unfulfilled because they decided to trade that spiritual prerogative for just such a mess of the world’s pottage of loping horses and pretty young girls. Touched by Srila Prabhupada’s words and character, they had begun as determined devotees but had suffered some eclipse of vision and fallen away. And whenever I meet them, whatever they have become—and there is no limit to their variety—they are like the blind men with the elephant: each one has accepted some part of life for the whole, some fragmentary truth or half-truth for truth itself, some personal little interest for the all-embracing interest of Krsna consciousness. If that were to happen to me, how could I ever speak again?

I spent that evening quietly at home, chanting Krsna’s holy names and reading Bhagavad-gita. There was more than mere solace in these humble acts. There was strength to push on even when the whole world seems to be forcing you to be someone else. There was the wisdom to reinforce the fight against maya, the illusory energy. And there was Krsna, and a vision of a sweet homecoming at battle’s end, urging me on:

“Therefore the doubts which have arisen in your heart out of ignorance should be slashed by the weapon of knowledge. Armed with yoga, O Bharata, stand and fight” (Bhagavad-gita 4.42).

One Response to The Rothschilds — Privilege Declined