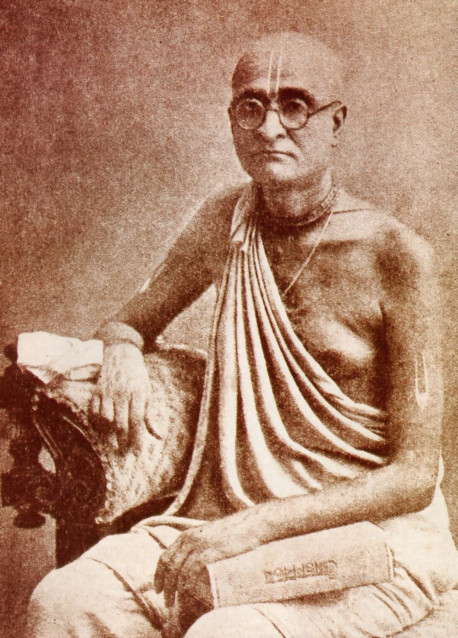 Today our Book Trust offices in New York received delivery of a new typesetting system to be used for publishing Back to Godhead and other Krsna conscious literature. It’s a sophisticated computerized arrangement with a video terminal, 32,000 bytes of electronic memory, on-line interfaces, and other wonders of modern microchip technology.

It will seem a little strange, perhaps, to see young American women in saris and shaved-headed men in orange robes sitting at the keyboard of such a device, absorbed in entering data or updating computer files. It may seem incongruous, unspiritual.

Yet we don’t think it’s strange at all, nor incongruous, nor unspiritual even in the least. In fact, we think it’s delightful.

The man was here all day installing the thing—measuring electronic pulses, soldering wires, running diagnostics, and all the while nearly climbing the walls because the Hare Krsna people don’t let you smoke cigarettes in their building.

Now it’s late in the evening, the man has gone home, the machine, we hope, is ready for action, the devotees in the building are retiring for the night. I have been unwinding a little, savoring the late-evening peacefulness by quietly chanting Hare Krsna on my beads.

But the world of spiritual tradition and the world of technology seem to have touched one another just at the right moment, in a fortunate, enlightening way, for the computerization of our publishing offices makes sense to us only by the grace of this simple, austere, and scholarly spiritual teacher, Srila Bhaktisiddhanta Sarasvati Thakura.

Up until the time of Srila Bhaktisiddhanta Sarasvati, devotees of Krsna in India generally avoided having anything to do with the mechanized contrivances introduced under the British raj. Better to live simply and not divert one’s mind from meditation on Krsna, the supreme Absolute Truth. After all, what would ultimately be the benefit of modern gadgets and conveniences? Would they really make life happier or better? Life is meant for spiritual realization—why let one’s attention be distracted?

But Srila Bhaktisiddhanta had a different idea, and a higher understanding of spirituality. He was a teacher in the line of Srila Rupa Gosvami, the great devotee and scholar who had written in medieval times,

“One is perfectly detached from all materialistic, worldly entanglements not when one gives up everything but when one employs everything properly for the service of the Supreme Personality of Godhead, Krsna. This is understood to be perfect renunciation in yoga.“

If everything is God’s energy, why should anything be given up? If God is good, then His energy is also good. If God is real, then this world and the things it contains are also real. It is only our misunderstanding and misuse of them that are false. Materialistic perplexities entangle us because we draw false lines of ownership and claim God’s property as ours. We mistakenly believe that the things of this world are meant for our enjoyment, not understanding that if they are God’s property, we should use them only in the service of God. Puffed up by false egos, we think ourselves masters of all we survey, not appreciating our true nature as loving servants of God.

Srila Bhaktisiddhanta, therefore, taught that devotees should willingly accept whatever will be of use in Krsna’s service. This is another principle of Krsna consciousness—that one should accept whatever is favorable for the service of the Lord and reject whatever is unfavorable for that service. For example, devotees give up intoxication, meat-eating, illicit sex, and gambling, because although these too are part of the world, they are obstacles to progress in devotional service. But anything that enhances devotional service one should accept.

According to Srila Bhaktisiddhanta Sarasvati Thakura, the best way to serve Krsna is to spread Krsna consciousness for the benefit of others. This is also stated by Krsna Himself in Bhagavad-gita. Everyone is a part of Krsna, the supreme Ultimate Reality, and therefore everyone should know the science of how to connect oneself with Krsna in a natural, perfectly harmonious relationship of devotional love. Because we have forgotten this relationship, we are perplexed and suffering in this material world; by reviving it, we can be freed from illusion and misery and resume our natural life of eternal knowledge and bliss. Because Krsna is the father of all living beings, He earnestly desires that we come to our senses and resume our loving relationship with Him and become happy.

Srila Bhaktisiddhanta therefore taught that devotees should be eager to use everything possible for one central purpose: to broadcast the glories of Krsna, the Supreme Personality of Godhead. Simply by hearing about Krsna or anything related to Krsna, one gradually becomes enlightened. And this enlightenment can bring the highest welfare to all.

Srila Bhaktisiddhanta especially emphasized the importance of the printing press, which he called “the big mrdanga.” The mrdanga is a clay drum used to accompany kirtana, or congregational chanting of the maha–mantra—Hare Krsna, Hare Krsna, Krsna Krsna, Hare Hare/ Hare Rama, Hare Rama, Rama Rama, Hare Hare. But although the mrdanga may be heard for a long distance, the scientific knowledge in the Krsna conscious literature produced by the “big mrdanga ” can enlighten people all over the world.

Our spiritual master, His Divine Grace A.C. Bhaktivedanta Swami Prabhupada, the author of more than seventy books of spiritual realization, was expert in playing this “big mrdanga.” Srila Bhaktisiddhanta Sarasvati Thakura had personally advised him to publish books about the science of Krsna, and this was advice that Srila Prabhupada diligently followed. Following in the footsteps of Srila Bhaktisiddhanta Sarasvati Thakura, Srila Prabhupada gladly used everything—printing presses, dictaphones, microphones, whatever—to broadcast the glories of Krsna, the Supreme Personality of Godhead.

So the day ends with meditation on Srila Prabhupada and Srila Bhaktisiddhanta Sarasvati Thakura, who taught not only how to live amid modern technology but how to employ that technology perfectly, for the highest purpose, by offering it at the lotus feet of Lord Krsna.