Back to Godhead > ISKCON > Temples > Krsna Culture — A Force for Unity in the U.K.

Krsna Culture — A Force for Unity in the U.K. 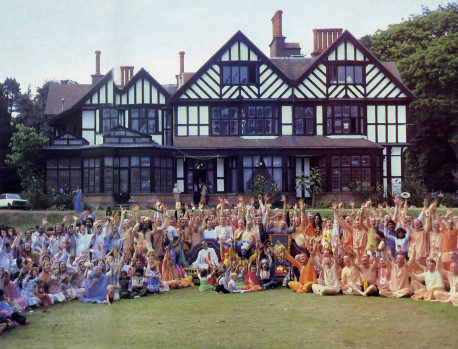 The Krsna consciousness movement’s multifaceted projects from Bhaktivedanta Manor, in the Hertfordshire country·side, near London. The estate was donated by George Harrison.

Horace walked on stage, found a bottle, and rubbed it. Out popped a malicious genie who demanded to be constantly engaged. Horace commanded him to chant Hare Krsna, Hare Krsna, Krsna Krsna, Hare Hare/Hare Rama, Hare Rama, Rama Rama, Hare Hare, an engagement without beginning and without end. The children of Letchmore Heath loved the performance by the devotee troupe, and so did the local papers. They featured the children’s-day open house at Bhaktivedanta Manor, Hare Krsna headquarters for the United Kingdom, and noted that devotees had become “an accepted part of life in the village.” 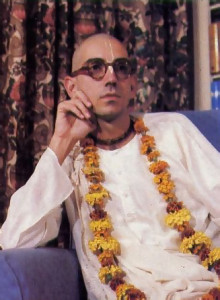 Devotees have in fact become an accepted part of life throughout the U.K., where Commonwealth citizens from Dover to Glasgow are joining in the program and practices of the International Society for Krishna Consciousness. Nicholas Davies, fortyone, lives in London with his wife and two daughters. He is a fruits-and vegetables trader. Elizabeth Loehning is seventy-seven, an accomplished linguist, and retired. Maganbhai Bhimjiyani, born in Uganda in 1922, is president of a pharmaceutical products company and head of Britain’s Lohana families community. Like thousands of others, they have become Life Members of ISKCON U.K.

“They are business people, students, professionals, people who have embraced the Krsna consciousness ideals while retaining their place in the secular world.”

Full-time devotees number three hundred in Britain and Life Members and other supporters tally in the tens of thousands. They have, for the most part, come in contact with devotees through daily street chanting parties and ISKCON publications.

“My eyebrows used to go up like everybody else’s on Oxford Street;” Elizabeth Loehning explains, “but when my interest in spiritual thought turned to the East, someone suggested I try the Hare Krsna temple. I had read many books on Eastern philosophy, but I found the Bhagavad-gita by Srila Prabhupada clearer and more concise than the others. The teachings have brought me great peace. I chant every day.

“Most people I know look on devotees with mild wonderment and not a glimpse of understanding. Older people especially are victims of their habits and can’t be bothered to change or learn new lessons in life. They’re too tired. But you never know when the understanding will come. I’m seventy-seven now and disabled, but I became a Life Member, and it’s brought me happiness and fulfillment.”

Full-time devotees qualify for initiation into Krsna consciousness by following four basic regulations: no intoxication, no illicit sex, no meat-eating, and no gambling. Life Members do not always seek initiation, but demonstrate their support by attending temple ceremonies, reading Krsna literature, and donating funds or services to ISKCON temples. 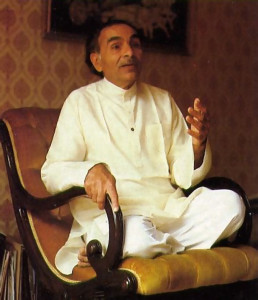 The majority of ISKCON Life Members in the U.K. are Asians, who look to Krsna temples as their home away from home. Most Asians in the U.K. emigrated in the 1950’s and 1960’s, when postwar England was developing rapidly and required a large labor force. By 1968 there were more than a million and a half immigrants in Britain, searching after better material comforts than those they had known at home. Finally the British government called a halt to the influx, stopped the unrestricted entry, and thus set off a rush to establish residency. In less than one year an additional 230,000 Asians had entered the U.K. Then, in the early 1970’s, an Asian exodus from Uganda pushed the number of immigrants over the two million mark, nearly three percent of the total British population. 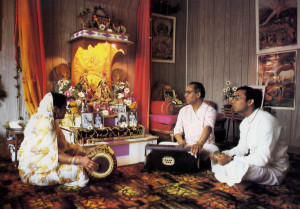 A large number of Asians came alone, hoping they could save enough to call their families later. They soon realized that their plans had to be revised. Immigrants were generally limited to low-paying jobs with little chance for promotion: the government often took two or three years to grant entry visas. After many years, traditions were exchanged for those of British culture. The children became more and more Anglicized. Britain was their home, and the traditional culture of India a relic of past generations. 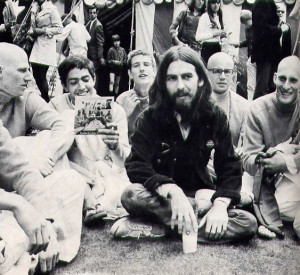 Appreciation for the Krsna culture takes many forms. George Harrison meditates on the Hare Krsna mantra.

“The second-generation Asian is critical of his parents’ orthodoxy and is seeking liberalization of family customs—especially those related to sex,” explains Dr. Bhikhu Parekh, Senior Lecturer in Politics at the University of Hull. “Often the dominant white culture encourages an immigrant child, by subtle and not so subtle means, to despise his own culture. Many such cases are extremely tragic: youths ashamed to be seen walking on the streets with their parents, children struggling to wash themselves white, persuading their mothers not to wear saris, asking parents to be given a new name, and the like. The situation cannot be solved unless Britain recognizes itself as a multicultural society and takes firm steps to encourage a sense of positive identity in its cultural minorities.” 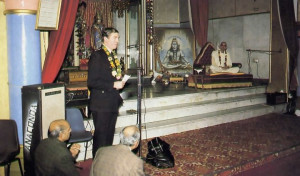 The Chief of Police of Harrow offers words of praise at the opening of the ISKCON Youth Club, Harrow branch.

In many ways, the lifestyle of devotees and that of orthodox Hindus run parallel, and devotees often find themselves regarded as emissaries of Indian tradition. Local authorities and community leaders frequently approach ISKCON to help resolve cultural conflicts between British and Asian youths. Devotees respond by organizing school lecture programs, clubs, and summer camps for young people, and by teaching young people to transcend cultural differences by realizing their common spiritual nature. 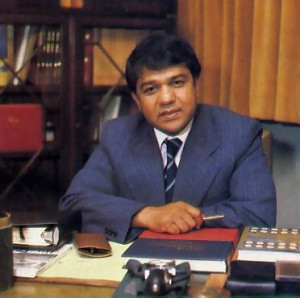 “The problem among Asian youth is generally described as a lack of material self-esteem,” explains Vicitravirya dasa. Assistant Governing Body Commissioner for ISKCON U.K. “Actually, this is a shortsighted explanation. There is truth to descriptions of racial prejudice, children torn by pressures at home to be Asian and pressures outside to be Western: but the real solution is not to reinforce temporary religious or national identity. ‘I am Hindu’ and ‘I am Christian’ are both bodily designations. The real self within the body is eternally a servant of God, and any identification with—place of birth, religion, or caste is a misconception devoid of any redeeming benefits.

“Even from a material point of view, what value is there in trying to encourage nationalist sentiment? India is technologically retarded, and Britain is spiritually anemic. There is as much incidence, if not more, of children leaving home among the British as among the Asians. Encouraging pride as ‘Asian’ or ‘English’ won’t be effective in increasing the stability of young people. Real progress can be made by teaching that God is the proprietor of all countries, and that our common heritage is service to Him.” 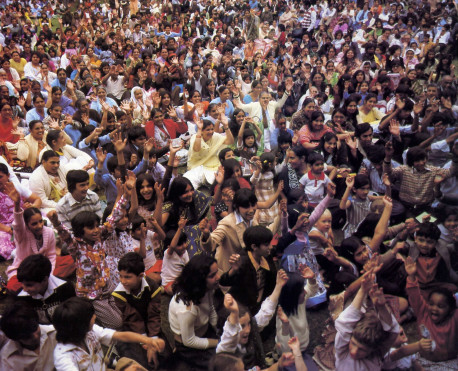 Upwards of forty thousand people, both
Asians and Britons, regularly come to Bhaktivedanta Manor for festivals like this one, the celebration of the day Lord Krsna appeared in this world. 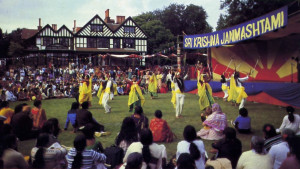 The British were the first to popularize knowledge of Indian culture, albeit through a veil of Christian condescension. Colonial zeal to convert “Hindoo heathens” has subsided, for the most part. Nonetheless, ignorance of the Vedic culture’s true spirit pervades English schools. The British Community Relations Commission reports that a majority of teachers do not think their education has adequately prepared them for working in multiracial schools. “I was completely ignorant of these children’s culture, religion, and background;” a Bristol teacher admits. “I had no real knowledge of their lives and found it extremely difficult to begin teaching.” Life after death, arranged marriages, vegetarianism, and unfamiliar religious practices are some of the concepts teachers must somehow comprehend and accommodate without prior training. 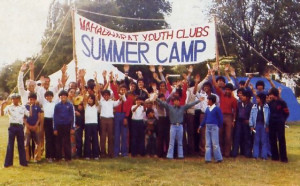 Partly impelled by necessity and partly inspired by the numerous school programs initiated by devotees, teachers in the U.K. have begun looking to ISKCON for insights into the thoughts and beliefs of Asian students.

“Devotees are uniquely situated,” says Ramesh Solanki, head of the Gujarati Arya Youth Program of Harrow. “They are multinational and therefore not seen as representing exclusively one or another of the various Indian religions—Sikh, Jain, Parsee, Hindu, and so on. They can, in this sense, effectively explain the universality of Vedic philosophy.” 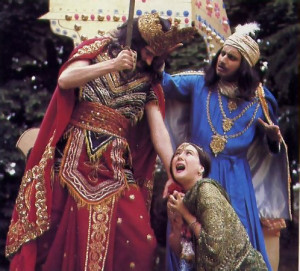 The Vedas are the essential texts of India, compiled about five thousand years ago. They prescribe various methods of worship, according to one’s degree of detachment from material affections. Contrary to popular belief, however, the Vedas are not polytheistic. There is a Supreme Godhead, called Krsna, who is worshiped and adored by scores of lesser beings: Siva, Durga, Indra, Brahma. Krsna (literally the “all-attractive one”) is the same God of creation recognized in all revealed scriptures of the world, and devotees of Krsna therefore do not consider themselves to belong to one religion among many. Rather, Krsna consciousness (technically called bhakti-yoga) invokes a vision of all living beings as parts and parcels of God, beyond designations such as Hindu or Christian.

Working with the Government 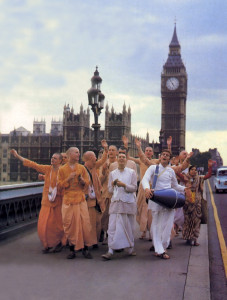 A familiar sound in London streets is chanting of the Lord’s holy names (Hare Krsna). It draws together people of all religious and ethnic backgrounds in a movement for world place.

One of the hotbeds of racial violence in England is Southall, a densely populated Asian community in South London. Riots broke out recently there between members of the extremist British Nationalist Front and loosely organized Hindu radicals. Three youths were killed. Less than a week later, devotees had mobilized dozens of Southall young people into an ISKCON youth club. Working with local authorities, they went door to door, campaigning for a krsna-kranti (“Krsna revolution”) to offset racial tension.

The initiative of devotees in Southall prompted Suhail Aziz, Director of General Services for the government-sponsored Committee for Racial Equality, to address the crowd gathered for the club’s official inauguration.

“ISKCON is making an unparalleled contribution to racial harmony in this country,” he said, and he emphasized the importance of local support for the devotees’ effort in areas of Asian concentration. Six ISKCON youth clubs are presently operative in England.

Responding to Mr. Aziz’s comments, Srila Jayatirtha Maharaja, initiating guru for ISKCON U.K., declared, “As long as we remain lodged in a bodily concept of ourselves—’I am American’ or ‘British’ or ‘Hindu’—such uprisings as those we saw here last week are inevitable. Material consciousness is a diseased condition, but it can be cured by reviving our dormant Krsna or God consciousness. Actually, we are related spiritually; but these artificial divisions oblige us to war and violence. Therefore we are presenting Krsna consciousness not just here but around the world as the peace formula, the solution to the prejudices of mankind everywhere.”

Devotees do not consider themselves social workers. They view the problems of the world as essentially spiritual. If there is too little food, it is not an economic problem but a spiritual one, since men and governments refuse to see their obligation to share equally the property of the Lord. If there is racial unrest, it is also due to spiritual shortsightedness, to accepting the body and not the eternal soul as the real self. In the minds of people still unfamiliar with the meaning of Krsna consciousness programs, devotees are enigmatic, strangely garbed remnants of an ancient culture somehow transplanted to the West. But for thousands in the U.K. and elsewhere, Krsna consciousness offers a broad vision of the world as it some day may be—unified by knowledge of the self, beyond cultural and racial differences.