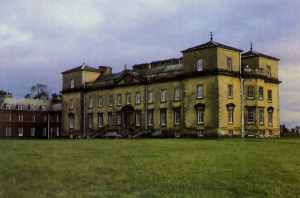 Croome Court has been the home of British nobility for generations; it was built in 1752 by the first Earl of Coventry. The nearly 175,000 square feet of buildings were the residence of the Queen of Holland during World War II. Now the estate will house elementary and secondary school children, plus a variety of academic and artistic workshops, including ones in graphic design, painting, gardening, traditional Vedic cookery, and classical Eastern music.

Indonesians Are on the Way to Krsna

Jakarta—The Bhaktivedanta Book Trust has just released an Indonesian translation of On the Way to Krsna, a book originally written in English by His Divine Grace A.C. Bhaktivedanta Swami Prabhupada. Rendered into Bahasa Indonesian by Gaura-mandala-bhumi dasa, an Australian devotee of Krsna, On the Way to Krsna has won warm praise from Indonesia’s Central Body of Hindu Dharma. Tjorkorda Rai Sudharta, a spokesman for the organization, made this comment:

“Having read the translation, we consider this a book that should be read diligently, especially by the followers of the Hindu faith all over Indonesia, because its contents are completely based on the teachings of the scripture Bhagavad gita.. . . By reading this book one immediately gets a deep understanding of the teachings and philosophy of Sri Krsna—an understanding which brings mankind towards the Supreme Lord.”

And Dr. I. B. Mantra, Governor of the Indonesian island of Bali, offered the following appreciation of the Book Trust in general:

“The Bhaktivedanta Book Trust is performing an important service to humanity by publishing the great philosophical texts of India’s ancient Vedic civilization…. It is a great joy to see that these writings are now being made available to scholars and students all over the world, and I hope the Book Trust will continue to bring out such high-quality publications.” 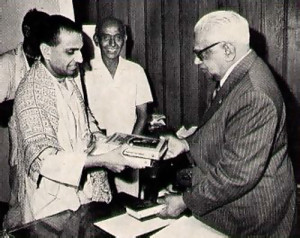 A Life Member of ISKCON, Prime Minister Ramgooram is entitled to all publications. Here presenting him with several new books are Navayogendra Swami and Shree Sewoopaul. ISKCON Patron Member.

Mauritius—This small island nation in the Indian Ocean has hundreds of Life Members of the International Society for Krishna Consciousness.

Among them is the Prime Minister, the Hon. Sir Sewasegoor Ramgooram. Recently Sir Sewasegoor underscored his support of ISKCON’s programs, which include the restoration of the Vedic land-based, spiritually oriented culture.

“If we can restore the Vedic culture,” he said to ISKCON’s Navayogendra Swami. “it will be by your blessing.”