“Here is Something Very Beautiful and Lovely” 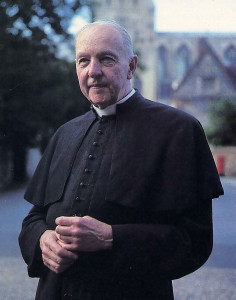 My first impression of the Hare Krsna temple was, “Here is something that is very beautiful and lovely.” As far as the worship was concerned, it was the happiness of it, the joy of it, that I noticed. I observed it in all the faces of the devotees. And, of course, there was the dancing, which in the Christian church you don’t have at all. I also was very impressed with the way the, children were enjoying themselves in worship and really taking part in it. So it was an experience of great joy, an experience that made me think, “This is what religion is all about.”

Having stayed with the devotees, I was able to appreciate some of the discipline involved in their way of living. It isn’t an easy life. Indeed, it is a hard life in many ways—rising early, abstaining from meat and intoxicants and sex outside marriage. But it has always been my belief that religious life must be a disciplined life. Maybe that’s where so many Christian churches have failed: they do not expect or ask for a disciplined, ordered life.

I have read several of Srila Prabhupada’s books and commentaries and find them a tremendous help. I’ve also found that chanting Hare Krsna has helped me a great deal in my general time given to prayer and meditation. Some Christians do use this kind of prayer. The rosary is chiefly associated with Roman Catholics, but many members of the Church of England also use it. And there are many Russian orthodox Christians who chant the name of Jesus several hundred or thousand times every day. It’s a great help to many people to meditate on the names of God. In the book of Psalms there are biddings to praise the name of the Lord and to sing.

Srila Prabhupada once wrote to us in England that the Sanskrit word Krsna and the Greek word Christos have a common root. I remember that during the Second World War, I was in Greece for Easter, and it was a wonderful thing to hear all the people chanting and singing Christos anesthe—Christ is risen, Christ is risen. I get the same feeling hearing the devotees chant Hare Krsna.

I have read most of the writings of Thomas Merton. He felt that there was much in India’s tradition that could help Christians understand the purpose of religion. For many people today, the teachings of their Bible do not, for some reason or another, seem to fulfill the deepest needs.

I’m sorry to see that the members of the Hare Krsna movement are sometimes being harassed by the police and that some commentators are giving out false ideas about their way of life and, their worship in their temples. And, of course, they are being wrongly labeled as a “cult.” There are in fact many undesirable groups about today, but it’s really not proper to number the Hare Krsna movement among them. Very often I think this is done through simple lack of information. Then again, some people see in this movement something that’s going to hurt their way of life, and they do all they can to stop it. They’re so satisfied with their materialistic way of life that they wouldn’t want a religion that really practices what it preaches. So they try to suppress it. They feel it’s a threat to them. . . . 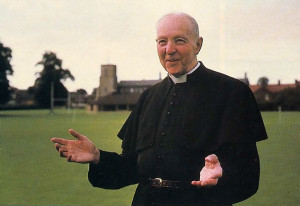 The Bible, like, the Bhagavad-gita, makes a distinction between the soul and the material body. Jesus said that we are spirit, that God is a spirit, and that we should worship God in spirit and in truth. But it also says in the Bible that when God made man’s earthly body, it was not alive until God breathed into it. And then the body became alive—the soul gave life to the body. And you and I are souls living in such bodies Oust as the Hare Krsna movement teaches). Yet many Christian people believe that the body that is buried in the earth will somehow arise again on the last day and go to heaven. They appear to forget that the body is, after all, only clothing for life. That’s a great tragedy, and that’s why I think that cemeteries and churchyards are all such dreadful places. A woman will go there and say, “I’m going to visit John,” speaking of her late husband. But we shall have another body after death—a spiritual body. It’s the kind of body that Jesus had when he appeared to Mary Magdalene on Easter morning, the kind of body he had when he came to his disciples—the Bible purposely says that the doors were locked and yet Jesus appeared in the midst of them. So it’s a spiritual body we shall have. The teaching of the Vedas is very strong on this point. You learn from the very start that “I am not this material body.” I think that Christians are giving perhaps a too materialistic conception of who we are. 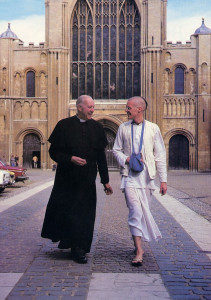 There is an ancient tradition that Jesus was a vegetarian. Whether this is actually true I do not know. But I would go as far as to say that St. John the Baptist was a vegetarian, and those who belonged to the same sect as he. And, of course, in the Old Testament we have the example of Daniel, who lived as a vegetarian and refused to eat the meat (or drink the wine) that King Nebuchadnezzar ordered his stewards to give him while he was imprisoned. The stewards insisted he take it, so that he would not lose his health. But Daniel made a bargain and said, “Look, give me vegetarian food just for ten days, and then see what I’m like.” At the end of the ten days, Daniel was in a better state of health than those that had been eating the meat and drinking the wine provided by the king. So the Christians are many times bidden to be vegetarian. Adam and Eve, before they fell, lived a simple life by eating those things that God provided for them. They didn’t kill animals for food. We should all try to get back to that way of life by eating grains and vegetables and drinking milk. Not only will we be better off physically, but our mental powers for understanding spiritual subjects will be strengthened if we eat and drink in the way prescribed in the Hare Krsna diet.

I’ve thought of Jesus Christ as a guru. He said that he was the way, the truth, and the life, and that no one comes to the Father but through him. In this way he was speaking as a guru to his disciples. And in the same way, a Krsna conscious devotee receives instructions through his guru.

We are living in days when Christians of various traditions are trying to get together and find unity. But more important still, many Christians are looking beyond their immediate traditions and realizing a transcendent unity of all religions.

We must get beyond the external rituals, forms, and terminologies. The Vedas teach that there is a sense in which all religions are the same: we should all be living our lives in love and service to God. I’m quite sure that Christian people can accept this as a principle to live by.