Gajendra the Elephant — Breaking Open the Jaws of Death 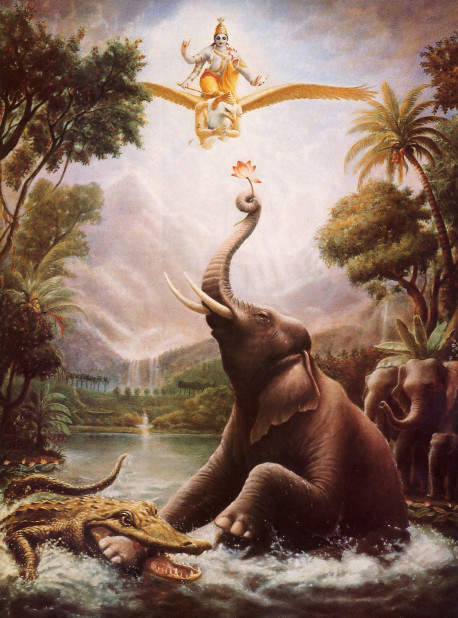 Western poets and philosophers have long lamented the power of time. Shakespeare’s King Richard despairs, “I wasted time, and now doth time waste me.” But in Srimad-Bhagavatam and other Vedic literatures we find portraits not only of time’s victims but also of persons who conquered time and death. One was Gajendra.

Ages ago, on a celestial planet in this universe, there was a mountain named Trikuta. In the valleys surrounding this mountain were many lakes and streams, whose water was clear as crystal and whose banks and beaches were covered not with sand but with trillions of tiny jewels. Sometimes lovely young demigoddesses would come to the lakes and streams to bathe, and their bodies (quite unlike those of earthly women, who must smear themselves with deodorants) lent a pleasing fragrance to the water and the breeze.

In one valley of Trikuta Mountain was a garden called Atumat. Many tropical fruits—including mangoes, coconuts, dates, pomegranates, and bananas grew luxuriantly all year long. There was a lake filled with golden lotuses and other rare flowers. Intoxicated bumblebees drank the nectar of the flowers and hummed along with the chirping of the birds. And graceful swans glided across the lake’s surface.

Deep in the mountain forest lived Gajendra, the king of the elephants. On one occasion Gajendra and his male and female companions wandered to the lake, overrunning all sorts of plants, creepers, thickets, and trees in their path. As soon as Gajendra’s scent reached the rival elephants and other ferocious animals like lions and rhinoceroses, they fled in fear. The smaller and less dangerous animals like the porcupines, rabbits, foxes, and wolves remained in the forest. But out of respect for Gajendra, they did not come before him.

The weight of Gajendra’s body made Trikuta Mountain tremble. As Gajendra walked he perspired, his mouth dripping with liquor and his eyes clouded with intoxication. From a distance he smelled the lotus flowers’ sweet pollen. Now he led his herd to the lake, where they could satisfy their thirst.

In a moment the king of the elephants plunged in, bathed, and drank the cold, clear, nectarean water. Feeling utterly satisfied and refreshed, he invited his wives and children to bathe and drink as he had done. And with great endeavor he drew water in through his trunk and sprayed it over them.

Then, suddenly, a huge crocodile attacked the mighty elephant’s leg. Gajendra was uncommonly strong, but though he tried and tried, he could not get free. His wives felt aggrieved and began to cry. The other elephants wanted to rescue Gajendra by grasping him from behind, but because of the crocodile’s great strength they could not do anything. So the crocodile and the king of the elephants fought and pulled each other in and out of the water, for one thousand years.

Eventually, the elephant became weakened. At the same time the crocodile, being an animal of the water, increased in enthusiasm, physical strength, and sensory power. When Gajendra saw that he could not save himself, he became terrified of being killed.

“The other male elephants, my friends and relatives, cannot help me,” he thought. “What, then, to speak of my wives? It must be the will of providence that I have been attacked by this crocodile.

“The serpent of eternal time endlessly chases everyone,” said Gajendra, “but if one who fears this serpent seeks the shelter of the Supreme Lord, the Lord gives him protection. Even death runs away in fear of the Lord. I therefore surrender unto the Supreme Personality of Godhead, Krsna.”

Now Gajendra fixed his mind on a prayer he had learned in his previous life, and he chanted it with all his heart. “The Supreme Lord is the platform on which everything rests and the ingredient from which everything is produced,” Gajendra prayed. “The Lord is the person who has created this cosmic manifestation. By expanding His energy He keeps it sometimes visible and sometimes invisible.

“The identity of an actor on stage is covered by attractive costuming and dancing and cannot be understood by his audience. Similarly, the activities and features of the supreme actor cannot be understood even by the demigods and great sages, and certainly not by those men who are unintelligent like animals. But may that Supreme Personality of Godhead give protection to an animal like me.”

Gajendra did not want simply to be saved from his present predicament. He further prayed, “After I am rescued from the attack of the crocodile, I do not wish to live in this material world any more. What is the use of living in this elephant’s body, covered by ignorance? Now, fully desiring release from material life, I offer my respectful obeisances unto that Supreme Person who is the creator of the universe.”

In Bhagavad-gita we learn that all living beings are actually spirit souls, part and parcel of the Supreme Personality of Godhead—that they are like spiritual sparks emanating from the fire of the Absolute Truth. Unfortunately, some souls desire to forget their eternal connection with the Supreme Lord. As a result, they take birth in the material world, in the bodies of demigods, humans, animals, birds, plants, and insects. 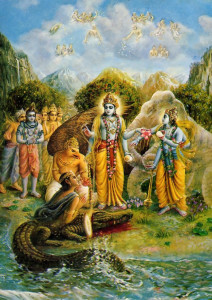 These bodies—subject to birth, death, old age, and disease—cover the eternal soul. And so, ignorant of his real identity, the soul remains in the material world lifetime after lifetime. Forgetful of his spiritual selfhood, he remains attracted to material life (to house, country, society, family, bank balance, and so on). Continually he thinks, “I am this body, and everything related to this body is mine.” This conception of life is extremely difficult to surmount, unless (like Gajendra) the soul realizes, aham brahmasmi—”I am a spirit”—and surrenders to the Supreme Spirit, the Supreme Personality of Godhead. At that moment he regains his spiritual enlightenment.

Seeing Gajendra’s awkward position, the Supreme Lord (in His four-armed form as Visnu) flew toward the mountain lake on the back of His great winged carrier, Garuda. Gajendra was still caught in the jaws of the crocodile and was feeling acute pain. But he was relieved to see the Lord wielding His disc and other weapons and coming in the sky to rescue him. So with great difficulty due to his painful condition, he took a lotus flower in his trunk, raised it high, and prayed, “O my Lord, O Supreme Personality of Godhead, I offer my respectful obeisances unto You.”

The Lord got down from Garuda’s back and pulled Gajendra and the crocodile out of the water. Then He released His disc and cut the crocodile’s head from his body. All the demigods and sages who had gathered there praised this act and showered flowers upon the Lord and Gajendra.

In their previous lives, both Gajendra and the crocodile had been kings. The crocodile had been King Huhu, of the Gandharva planet. But once, while reveling in the water with a group of celestial women, he had somehow pulled the leg of the sage Devala. At this the sage became furious and cursed King Huhu to become a crocodile. Despondent, the king begged pardon from the sage, who gave him the benediction that he would be freed at the very moment when the Supreme Lord delivered Gajendra. So as soon as the Lord cut off the crocodile’s head, the soul left that body and regained the beautiful form of the demigod King Huhu. After offering prayers to Krsna, King Huhu returned at once to the Gandharva planet.

In his previous life Gajendra had been Indradyumna, a great devotee of Lord Krsna and the king of a South Indian region called Pandya. When Indradyumna retired from his kingdom and family life, he went to the Malaya Hills, where he lived in a small cottage asrama and practiced spiritual disciplines. He let his hair grow in matted locks and engaged in continual austerities. Once, while observing a vow of silence, he became fully absorbed in the ecstasy of love of Godhead.

Just then the great sage Agastya arrived, along with his disciples. But King Indradyumna was so absorbed in meditation that he did not even notice the sage, what to speak of offering him a proper reception. Angered at this breach of etiquette, Agastya cursed the king.

“This King Indradyumna is not at all gentle,” said Agastya. “Being low and uneducated, he has insulted me. May he therefore enter the region of darkness and receive the dull, dumb body of an elephant.”

Because Indradyumna was a devotee, he humbly accepted the sage’s curse as the desire of the Lord. He lost his royal position and got the body of an elephant, but he retained his devotional mentality. And because he remembered how to offer prayers to the Lord, he received spiritual liberation. In fact, after the Lord saved His dear devotee from the crocodile’s jaws, He promised, “Anyone who offers Me the prayers you have offered and who meditates upon My form, this lake, this mountain, the gardens, the celestial trees, and My unlimited, all-auspicious activities—he will at last receive eternal residence in the spiritual world.”

As we have seen, time—death—takes everything away. No one can say that he is unafraid of death. Now, we might well ask, “Doesn’t Krsna’s devotee also die?” The answer is that a devotee still has to give up his material body, but the present body is his last. In Bhagavad-gita Krsna assures us that after a devotee gives up his present body, he does not accept another. He returns home, back to Godhead.