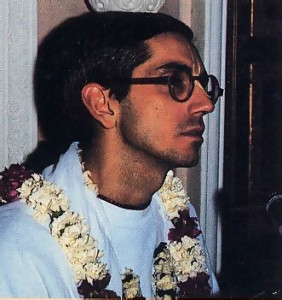 His Divine Grace Jayatirtha Maharaja, initiating guru for the United Kingdom, noted
that the center has been planned for decades.

London—Just off Oxford Street, English devotees of Lord Krsna have opened a new cultural center that includes a temple, a theater, and a vegetarian restaurant.

The six-story building near Soho Square was already a minor landmark, and the government had ordered it preserved for its historical and architectural value. Now that its interior has been remodeled into a replica of an ancient Vedic temple, the building has become even more of an attraction. Says one leading British architect, “This is the first time I’ve seen an interior recreate with such a degree of authenticity one of the great art forms of the ancient world.’ “ 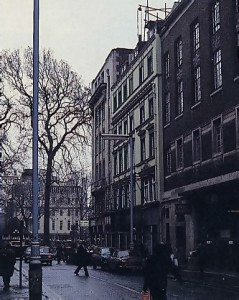 The greenish -hued building is just off Oxford Street, near Soho Square. It containes a temple theatre, and restaurant.

The grand opening took place on the anniversary of the day that Srila Prabhupada’s spiritual master, His Divine Grace Srila Bhaktisiddhanta Sarasvati Thakura (1874-1936), made his appearance in this world. Bhaktisiddhanta Sarasvati was the first Krsna conscious spiritual master to send his disciples to teach in the Western countries, and he specifically wanted to maintain a cultural center in London. But though he sent several followers there in the 1930s, they returned to India unsuccessful. 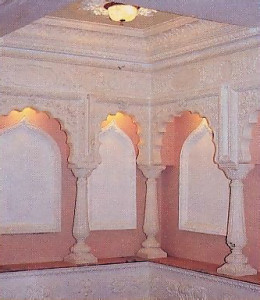 The Interior has been completely remodeled.
Now it is an authentic replica of an ancient
Indian temple.

At the opening ceremony His Divine Grace Jayatirtha Maharaja, ISKCON’s initiating guru for the United Kingdom, noted with pleasure that the wishes of Srila Prabhupada and Bhaktisiddhanta Sarasvati are now being fulfilled.

India-In late January more than one hundred thousand people, many of them yogis and monks, journeyed to the pilgrimage center of Allahabad, in southern Uttar Pradesh. The events that drew the crowds were Magh Mela (a yearly transcendental fair that dates back many centuries) and the Second World Hindu Conference. Guest speakers included the Dalai Lama, the current spiritual leaders of the Sankara and Madhva disciplic successions, and Srila Jayapataka Swami, coordinator for ISKCON in East India, Bangladesh, and Nepal and one of the eleven spiritual masters that ISKCON’s founder-acarya Srila Prabhupada selected to initiate new disciples. 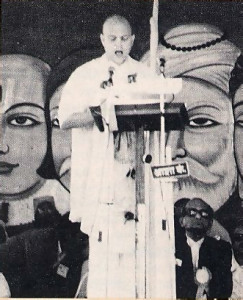 Allahabad is the place where the sacred rivers Ganges, Yamuna, and Sarasvati come together, and for spiritual purification and upliftment, thousands bathed in the waters. Yet in his address, His Divine Grace Jayapataka Swami pointed out that the most powerful spiritual practice—the one the Vedic literatures recommend for this age—is chanting and hearing the glories of the Supreme Lord, Krsna. The crowd responded with cheering and applause, and all through the festivities devotees of Krsna chanted the Hare Krsna maha-mantra and distributed thousands of volumes of Srila Prabhupada’s translations and commentaries on the Vedic literatures.