Back to Godhead > Society > Cow Protection > Churning Butter by Hand

The roots of peace and prosperity lie in working the land, protecting the cow, and loving Krsna. 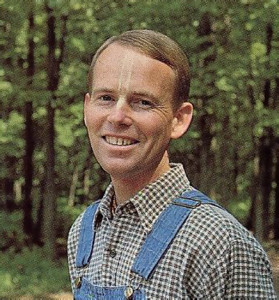 Being a bread-and-butter man, whenever I used to visit a Hare Krsna farm I’d marvel at the farm-fresh bread and butter. Unbelievable. Good enough even to offer to Lord Krsna. Now that I’ve moved to a Hare Krsna farm myself, Krsna has given me a good look at this simple treasure’s source—the land, the cows, and, naturally. Himself.

At dawn, the sunglow reveals the cows grazing in the upper pasture. A young man on an ox-cart carries the morning’s milking down a dirt road to the kitchen.

Inside, a young woman labors over a ten-gallon churning pot. She pulls on the end of a rope wound around a wooden paddle, and the rotating paddle churns the cream. Soon the cream expands and thickens into whipped cream. Her hair loosening, the woman keeps working the rope to and fro. After twenty minutes the whipped cream turns golden, and small buttery lumps begin to appear. The woman strains as the butter thickens (to and fro. Hare Krsna!), and when finally she hears splashing, she stops. She wipes her brow and sees that the cream has separated into buttermilk and butter.

“These women trying to shape up in health spas—they should churn butter and chant Hare Krsna,” chides Caranaravinda dasi, a real country cook. “The Lord would be pleased, and they’d be in better shape than Jane Fonda.”

For another twenty-five minutes, Caranaravinda squeezes out the remaining buttermilk and shapes the butter into large golden spheres, their rich color a measure of the lush pasture. Filling up a huge bucket are butter balls weighing a pound each. To get a similar stock from the Land O’ Lakes Indian princess, you’d have to pay upwards of $70. But this butter, although costing only pennies a pound, is priceless, because a devotee has churned it especially for Krsna.

“Mother Yasoda* [*A great devotee of Lord Krsna who played the part of His mother when the Lord sported in Vrndavana village some fifty centuries ago.] used to graze her cows on grasses that would specially flavor the milk for Krsna,” says Caranaravinda. “Whatever milk was left over she’d turn into yogurt, and whatever yogurt was left she’d churn into butter. The extra butter she’d clarify, and clarified butter, the perfect cooking medium, keeps for years. She used every drop of milk. And so do we.”

To get bread for the butter, the devotees harness the bull. Bulls, gelded and trained as oxen, help to plow the wheat fields, sow the seed, and cultivate and harvest the crop. And they even grind the grains. Walking in a circle, four oxen turn a drive-shaft that activates a pulley. And while a man pours wheat kernels into the hopper, the ox-powered drive-shaft and pulley turn a grinder that crushes the kernels into flour.

Besides food, cows and bulls provide other valuable gifts. After the cow has died a natural death, the skin makes first-rate shoe leather, the horns can be blown, the tail can become a whisk, and for those who insist on eating meat, the carcass remains. Even the urine of a cow is a time-tested medicine for curing liver diseases, and cow dung contains methane gas, perfect for cooking, lighting, and heating—all the prime energy needs of a simple home. Surplus methane-generated electricity may be sold to the power company (it’s legally obliged to buy), and dung minus methane still has all the nutrients necessary to make the grass grow green.

And let’s not forget the land. Besides providing grasses and grains for the cows and an immense variety of food for us humans, the land yields minerals, jewels, and flowers. The land gives us fiber for our clothing, raw materials for our shelter, and even herbs for our medicine. Indeed, long before the pharmaceutical industry and its hidden persuaders hooked us on their pills, people knew how to forage healing herbs in their own backyards.

Unfortunately, today even many fanners have forgotten how to be self-sufficient. One dairy farmer I know sells his own cows’ milk for $1 a gallon while his wife pays $1.80 for the man-handled, store-bought stuff. Most vegetable farmers trade their harvest for inedible paper. This paper money buys complex machinery that they hope will save them time and bring in more paper money. But greed never pays. In a recent national study of 130 stressful occupations, the job of farm manager ranked twelfth. Farmers are going out of business at the rate of one thousand per week, because the cost of farming has become greater than the profits. And since the industrialization of agriculture, the number of American families who live on farms has shrunk from 30% in 1920 to 2.5% today.

Nevertheless, Secretary of Agriculture John Block claims the industrialization of agriculture has “enabled the vast majority of Americans to engage in other economic activities that have produced the vast array of necessities and consumer goods which make possible the high standard of living Americans enjoy today.”

“But have people really become healthier or happier,” challenges Hare Krsna Governing Body Commissioner Rupanuga dasa, “by developing such a high-tech, dependent, urbanized life-style? Has the quality of life really improved? Has it been a fair trade, fresh water for the recycled chemicals and sewage called city water? Or clean air for the manmade gaseous substances now substituting for air? Or fresh fruits, vegetables, and milk for the canned, preserved, frozen, flavorless, watered-down products sold as eatables in the markets?

“Is it prosperity to have two locks on the door instead of one, special hot-lines to the police, fire, and riot squads, and a gun in every house? Or motorcycles and cars screeching into the morning hours? Or high-school seniors graduating with their brains ‘washed’ by fifteen thousand hours of television? And ten thousand Russian megatons inspired by American expertise now aimed at Americans’ living rooms? The answer must be a resounding NO! if we are to be honest.”

Although Lord Krsna gave us the land and the cows as our natural economic base, we don’t find much talk about them in Business Week, Money, or Fortune. We find, instead, the latest bank rates and high-tech investments, bargains in wines and personal computers, and speculation that gold may soar to $4,000 an ounce by 1986.

But others, like financial adviser Howard Ruff and survivalist Sally Harrington, are more down to earth. In a world spinning toward political, economic, and ecological disaster, Ruff explains why grains and beans are at least as good an investment as silver and gold.

“You spend hundreds of dollars every year to insure your cars against the accident you fully expect not to have,” says Ruff, “and you can’t eat the cancelled checks. Your money is wasted unless you’re ‘lucky’ enough to have an accident. Food storage is the insurance you can eat.”

Adds Harrington, “Wheat, if kept dry and protected from rodents and insects, will last for two or three thousand years. Some that was found in King Tut’s tomb was still edible, and it even germinated.”

Of course, in this world nothing is forever, not even land and cows. That’s why the devotee’s real wealth is in the heart, where Lord Krsna lives. Whether a devotee serves Krsna on a farm or in the city, he aims all his activities at reawakening his awareness of Krsna and his love for Him. Because both the Lord and the soul are eternal, this Krsna consciousness is also eternal and is the devotee’s actual wealth.

But even if right now our hearts aren’t aware of Krsna, He can make us aware through bread and butter. That same tongue which we seek to gratify at all costs, if it tastes simple foods offered to Krsna and vibrates His transcendental names, can open up a whole world in which everything—the light of the sun, the fragrance of the earth, and, yes, bread and butter—becomes a blissful occasion for remembering Him and an impetus for returning to His eternal kingdom.

God’s personal abode, our real home, is free of any taint of scarcity. “That abode of Lord Krsna is full of palaces made of touchstones,” writes the Hare Krsna movement’s founder and spiritual guide. His Divine Grace A.C. Bhaktivedanta Swami Prabhupada. “The trees there yield anything one desires, and the cows give unlimited quantities of milk. There the Lord plays His flute. His eyes are like lotus petals, and the color of His body is like that of a beautiful cloud. He is so attractive that He excels thousands of Cupids.”

That’s Lord Krsna, the source of everything, and the real treasure.