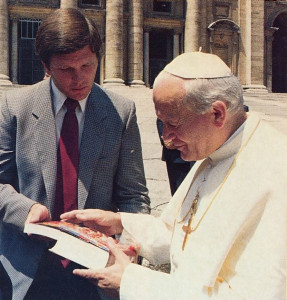 At the Vatican recently, Pope John Paul II received from Kirtiraja dasa Polish editions of Srila Prabhupada’s Bhagavad-gita As It Is and Krsna, the Supreme Personality of Godhead. Said the pontiff: “Thank you very much. They’re very beautiful.”

With more than one thousand devotees present, it was the largest Hare Krsna assembly ever to gather in Europe.

The boulevard Viareggio, after which the city is named, literally means “The Avenue of Kings,” and while a crowd of 100,000 watched Lord Jagannatha (“Lord of the Universe”), Srimati Subhadra, and Lord Balarama ride in three majestic carts along the parade route, the full meaning of the road’s name was realized.

The carts moved slowly and gracefully in what appeared to be an ocean of devotees, flags, and festoons bobbing up and down to the rhythm of the blissful chanting. People left their homes and office workers put aside their duties to catch a glimpse of the deities as they passed by. 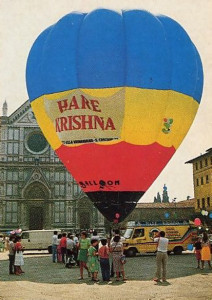 In Florence, the Hare Krishna balloon took celebrants aloft for a bird’s-eye view of the city.

In a speech broadcast throughout Italy by radio, Srila Gurudeva asked that Hare Krsna devotees be given a chance to run the Italian government, which has changed hands forty times since the end of World War II. “You’ve tried all the others,” he said. “Why not try this God consciousness movement? Even if you give us only one week, you’ll see the difference.”

During the day of the Ratha-yatra festival, at least 100,000 people saw the procession, 10,000 took prasadam (food offered to Krsna), and devotees passed out more than 200,000 pieces of transcendental literature. The country’s top national newspapers and TV stations covered the event.

The next day, the transcendental festivities moved to ISKCON’s temple in Florence. Known as Villa Vrndavana, the building was once owned by the renowned political theorist Machiavelli.

In a huge tent outside Villa Vrndavana, while devotees chanted and danced with overwhelming enthusiasm, Srila Gurudeva installed the Deities Sri Sri Radha-Vrajasundara, bathing Them with yogurt, milk, honey, and fruit juices. After the bathing ceremony devotees carried Their Lordships into Their beautiful new marble temple, designed and built by the world-famous interior designer Matsya-avatara dasa (Marco Ferrini), a disciple of Srila Gurudeva’s.

Srila Gurudeva’s appearance-day celebration, an initiation ceremony for one hundred and fifty of his new disciples, and a Vedic wedding also highlighted the festivities at Villa Vrndavana.