Back to Godhead > Society > Sinful Activities > Sense Gratification: The Opiate of the People

Sense Gratification: The Opiate of the People 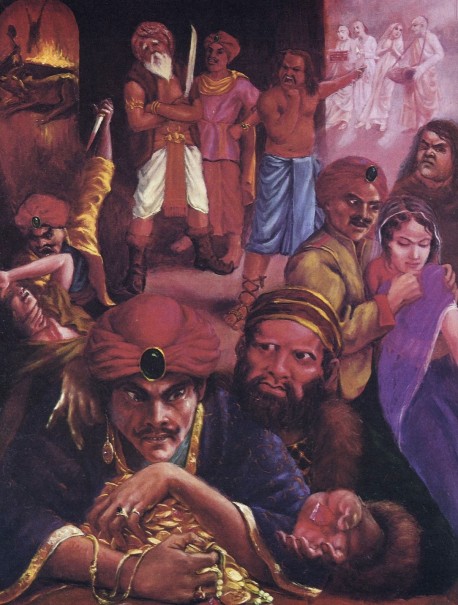 “The lifetime of the materialistic man is passed at night either in sleeping or in sex indulgence and in the daytime in making money, by any means, for gratification of the senses.” (Srimad-Bhagavatam, Canto Two, Chapter One, text 3)

According to the philosophy of the Vedas, our present materialistic civilization, being primarily based on the principles of eating, sleeping, sex and defense, is an existence on a par with the lives of lower animals like dogs, hogs, camels and asses. Human society has developed into a polished animal existence. The Vedic school of thought considers this the greatest waste of human energy because human life provides a chance to acquire knowledge. Therefore human society should be directed toward the goal of liberating the self from its bondage to matter.

Knowledge concerning the self is called atma-tattva. Atma indicates the living being, and tattva means knowledge. But those who are too materialistic are unaware of self-knowledge, being too much absorbed in the opiate of sense pleasure. In their dreamlike state of illusion, such foolish fellows, who are called karmis, or fruitive laborers, philosophize that man is meant to work hard to enjoy this temporary life. But no pleasure is to be found in this transient phenomena, for it is pervaded by fourfold miseries-birth, old age, disease and death.

Factually speaking, life is a hard struggle for existence. We may claim to be scientifically advanced, but that will not save us from the pangs of death. No one, regardless how rich or powerful, will survive the battle against material nature. One should examine the fact that his father or his father’s father has already died and that he will therefore also die, and similarly his children, who are the would-be fathers of their children, will also die in due course. How then can one find happiness here?

This physical world is known to be constantly changing. It is created just to be annihilated after some time, like waves in the ocean that appear and in a minute are gone. All material forms are like waves in the great ocean of material energy. They appear, develop, stay for some time, produce byproducts, dwindle and at last vanish from sight. But although material forms undergo many changes, the conscious self always remains the same.

In Bhagavad-gita (2.16) Lord Krishna tells Arjuna that seers of truth have concluded that the phenomenal world has no endurance and the conscious element (the self) no cessation. One can easily understand this truth. The body is always changing-from boyhood to youth, from youth to manhood, from manhood to old age-yet the living entity (atma) remains throughout all the changes of the gross body. Once we all had the bodies of five-year-olds, but those bodies no longer exist. Yet we still exist. Thus one can see that his existence is more than merely physical. This is the realization of those conversant with the science of the self.

Unfortunately, people who are too attached to sense pleasure never take the time to contemplate the nature of their existence. They go on life after life enjoying the meager pleasure they experience through their senses. In false happiness, they never make a solution to their material struggle. Therefore they are compared to dogs, hogs, camels and asses. This comparison may be explained as follows.

A common man, untrained in the standard of higher life, unfortunately spends his valuable time trying to perfect his animal propensities. Consumer consciousness, which both communists and capitalists share, educates people into acquiring a doggish mentality. After finishing a so-called education in a technical school, the so-called educated man doggishly goes from shop to shop to apply for work, but he is often rejected and informed that his skill has been replaced by a machine. As dogs, although of no real value to society, serve their masters for scraps of food, so these doggish men take meaningless employment to provide themselves with bread.

Such unfortunate men do not realize that with the rising and setting of the sun their duration of life decreases. As a dog will bark at and quarrel with anyone, so when approached by sadhus, saintly persons who wish to give them enlightenment concerning a more meaningful existence, these men argue that life is not meant for contemplating the Absolute Truth. They declare that God is dead and that all spiritual pursuits are simply a waste of time. It is better to get a job, they say, and work hard to enjoy life, for by our advancements in medical science we will conquer disease and live indefinitely.

Prolong life to the maximum duration and enjoy eating, drinking, sexual intercourse and merrymaking to the fullest-this is their hoggish mentality. They have no information of the eternal existence of the self; like sleeping men who have forgotten wakefulness, materialists, lost to their higher consciousness, want to enjoy the maximum pleasure in this life, thinking that there is no existence after death.

Modern leaders are very happy to keep people in this ignorant condition and thereby exploit them in the name of advancement. But this ignorance about the eternality of the living being and the changing of bodies in the material world has played havoc in the structure of modern human society. Industrial plans to increase the pleasures of life have only multiplied the problems. In a passion to get places quickly, man has manufactured the automobile, and now the world is suffering a new misery-air pollution. Thus by exploiting nature, man, thinking he is making progress, only aggravates the miseries of his material existence, like the camel, who derives pleasure from eating thorny twigs and tasting his own blood when they cut his tongue.

Even if by medical science one could prolong his life more than one hundred years, advancement of human civilization would not necessarily follow. The Vedas ask, taravah kim na jivanti: “Do trees not live for hundreds of years?” In San Francisco there are large redwood trees said to be thousands of years old, and similar trees exist all over the world. The lives of Buddha, Socrates, Jesus Christ and, in modern times, Sri Caitanya Mahaprabhu were all very short. But does that mean that a tree’s long life is more important? A prolonged life without the enlightenment to stop the onslaught of material miseries is of little value.

A materialist may argue that the life of a tree and the life of a man cannot be compared because the tree cannot enjoy life by eating and having sex. In reply to this the Vedas ask, “Do not common animals like dogs and hogs, living in the same villages as human beings, enjoy eating and sex?” One who misuses his valuable intelligence in trying to polish these animal propensities is no more than an intellectual beast. A society of such polished animals cannot attain peace, nor can it achieve progressive heights. An animal can easily harm another animal but rarely do good.

The ass is celebrated as the greatest fool because it works very hard carrying heavy burdens but making no profit, and after working hard for its master, it is awarded with a little grass. The grass the ass receives can be had anywhere, but in ignorance the ass thinks, “if I don’t serve my master, how will I eat?” Foolish persons, like asses, work hard day and night for an employer who exploits them by making them give the most production for the least wages. The salary they receive barely covers the ever rising cost of living. Thus, exploited by their employers, they are forced to reside in dungeons called apartments while the heads of the big enterprise reside in the beauty of the country.

The life style of higher consciousness is one of simple living but high thinking. One can easily meet the demands of the body. It is only the illusory comforts that man must work like a beast to obtain. Great sages of India like Srila Vyasadeva, who compiled the Vedic knowledge in written form some 5,000 years ago, lived in simple grass huts on the banks of rivers like the Sarasvati, yet they left behind immense treasures of transcendental writings full of all perfection. One should use his human energy in this way for the pursuit of higher consciousness. Such a life of self-realization far excels wasting human energy in imitating the eating and sleeping of animals.

To take birth, work, acquire material possessions, eat some food, grow old and die is not the purpose of human life. Human life is meant for earning true value. It is called arthada, or that which can deliver values. And what is the greatest value one can attain? Knowledge of the Absolute Truth and one’s existence beyond the body is the real value of human life.

The human life is so important that even the demigods in the higher planets sometimes aspire for human bodies on this earth because only in the human form can one easily go back to Godhead. Therefore in spite of having obtained such an important body, if one does not come to realize or at least inquire about the Absolute Truth, he has certainly lost sight of his real self-interest.

One obtains the human form of life by a gradual process of evolution in one body after another in a cycle of 8,400,000 species. Politicians and scientists who spread the idea of godlessness and sense enjoyment as all in all are misleading innocent people by involving them in illusory engagements to uplift their material position, thus leading them down the royal road to hell, which is not merely an imaginary fiery pit, but repeated birth and death in the 8,400,000 species of life. The opiate of material pleasure such leaders offer never has and never will bring satisfaction to the people, for it is based on a temporary platform.