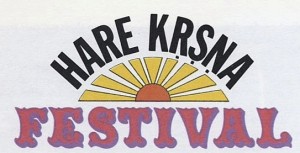 ON JUNE 9th and 10th of 1973 the devotees of the Hare Krishna movement from Germany, Holland, Sweden, Switzerland, France and England assembled in Heidelberg, Germany, for the celebration of a massive Hare Krishna festival.

When we say “Supreme Person,” we mean God, or Krishna. God is not nameless, formless or impersonal. We understand God to be the Supreme Personality, greater than all others. As stated in the Upanisads, nityo nityanam cetanas cetananam, eko bahunam yo vidadhati kaman: “Among all the eternal living beings, there is one Supreme Being, who fulfills the desires of all the others.” For example, among many citizens, one is the leader or president. God, similarly, is the leader of all living beings. He is a person who thinks, feels and wills, but He is always transcendental. 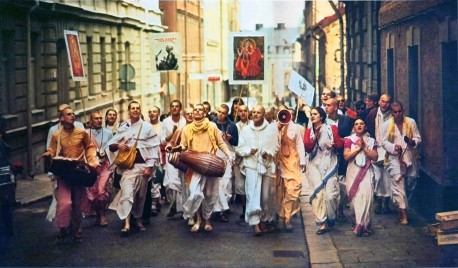 A Hare Krishna festival features singing, dancing and eating food first offered in sacrifice to please the Supreme Personality of Godhead, Krishna. This is usually called sankirtana. The process of chanting, dancing and feasting on prasada (spiritual food) was introduced by Lord Sri Caitanya Mahaprabhu almost five hundred years ago as the authorized process of God realization for the present fallen age of Kali.

“In the Kali-yuga the Supreme Lord comes as one who always chants the holy name of Sri Krishna, who is Krishna Himself and whose complexion is yellow. Persons endowed with sufficient intelligence will worship the Supreme Lord in this form, who will always be accompanied by His eternal associates and will chant and dance to the holy names of God.” (Srimad-Bhagavatam, 11.5.32).

These words of Srimad-Bhagavatam, recorded more than 5,000 years ago by the author of the famous Bhagavad-gita, Vyasadeva, foretell the advent of Lord Caitanya Mahaprabhu, the incarnation of Godhead for our age, Kali-yuga, the age of quarrel and dissension. Lord Caitanya, like Christ, was a spiritual revolutionary who taught that the conceptions of Hindu, Muslim, black, white, male, female and so on are “bodily designations that are finished when the body is finished.” Lord Caitanya taught that every living being, regardless of his outer dress as an animal, human, aquatic, bird, fish, etc., is an infinitesimal, eternal spiritual spark of the supreme spirit whole, Krishna. To revive our lost consciousness of God and our eternal relationship with Him, Lord Caitanya introduced this sankirtana movement when He was only sixteen years old, and in a short time He flooded the subcontinent of India with the sound of the Hare Krishna maha-mantra.

The chanting of the holy names of Krishna creates an atmosphere of transcendental pleasure on the streets of Heidelberg. At the far left Hamsaduta dasa performs a fire sacrifice. Such colorful ceremonies are performed for purification at Krishna conscious initiations and marriage ceremonies.

Lord Caitanya systematically staged gigantic Hare Krishna festivals in which hundreds and thousands of people would sing and dance for days together, feasting on spiritual food and thus feeling fully satisfied, realizing the transcendental pleasure of Krishna consciousness. Lord Caitanya predicted that in the future this Hare Krishna movement would spread to every town and village of the earth. This prediction of the Lord is today being fulfilled by His Divine Grace A.C. Bhaktivedanta Swami Prabhupada, who is the authorized representative of Lord Caitanya in our time and the acarya (spiritual master who teaches by his life) of the Hare Krishna movement that is now rapidly sweeping the world.

We can see from the pictures how universally applicable the process of chanting the Lord’s holy names is. Everyone—young, old, black, white, German or American-can participate in sankirtana. For this reason Lord Caitanya predicted that the congregational chanting of the Lord’s holy names would soon become the universal religion. In every community we find scriptures that give us names of God like Allah, Jehovah or Krishna. Authorized scriptures like the Bible, Bhagavad-gita and Koran give hundreds and millions of names for God, and through the mercy of Caitanya Mahaprabhu everyone can take advantage of the holy name of God by taking part in such Hare Krishna festivals as the one conducted recently in Heidelberg.

Practically the whole city population was in one way or another connected with our Hare Krishna festival. To get permission to conduct the parade on the Haupt Strasse and the fire ceremony on the Markt Platz, we took permission from Herr Handshusheim, the director of city planning, and from the chief of the Heidelberg police, who was very happy to give our parade a police escort. We engaged a printer to do our poster, which an advertising company placed all over the city. The television people sent their man to film the festival. Thus at least for the time our festival was in the planning and execution, people from all walks of life focused their attention either knowingly or unknowingly on Krishna, the Supreme Personality of Godhead, through the execution of their daily work.

This technique of applying one’s natural activities in the service of the Lord is recommended in Bhagavad-gita by Krishna Himself. “Whatever you do, whatever you eat, whatever you give away in charity or perform as penance should be done as an offering unto Me, and by this principle of work you you will be released from all sinful reactions and will come to Me.” When one works for Krishna voluntarily and favorably, he can find the perfection of life.

Sometimes people criticize us when they see us arranging to print advertising posters or applying for permits from the police. They think that in the guise of spiritual mendicants we are trying to perform mundane money-making or political activities.

People who do not know the science of God sometimes think that spiritual life means to become inactive, renounce the world and sit somewhere in a yogic posture taking deep breaths or meditating on something void or impersonal. They criticize, “If you are actually spiritual people, why are you using automobiles, tape recorders, money and so many other material things?” We reply according to what we have been told by our spiritual master and the statements of scripture: everything belongs to God.

As Krishna Himself says in Bhagavad-gita, “Of all that is material and all that is spiritual, I am both the origin and dissolution.” If we can understand that everything is Krishna or Krishna’s energy, we can also understand further that everything should be used in His service. This is not a very difficult fact to understand; yet if one applies it, the results are profound and revolutionary. We cannot accept that spiritual things have no substance, as if spiritual meant only aery, unknowable or formless. No. Rather, the criterion of whether a thing is material or spiritual is whether it is used in forgetfulness of God or the loving service of God. The important factor is the consciousness in which we use things. For example, an auto mechanic’s tools are neither criminal nor lawful. We cannot describe them like that. But to use the tools to steal a car is criminal, whereas to use them to fix a car in a workshop is lawful. The same tools are used, but one engagement is criminal and another lawful. Therefore, the activities of the festival-singing, dancing and eating-are all spiritual, since they are only for the glorification of God.

According to Bhagavad-gita, to execute any endeavor, five things are needed-the place, the senses, the doer, the activity and also the will of providence, or, more exactly, the sanction of the Supreme Personality of Godhead. So, like any activity, material or spiritual, our festival required practical arrangements. 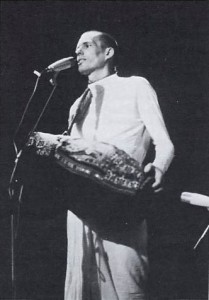 In Every Town and Village: Hamsadutta dasa leading chanting of the Hare Krishna mantra.

The place: We rented the Kurfalshees Museum and used the streets and marketplace of Heidelberg for our public activities. The senses: the hands, legs, brains and bodies of the devotees, who did everything from making posters and cooking food for Krishna to singing the Hare Krishna mantra ecstatically for hours. We engaged all our senses fully and always in a mood absorbed in praising Krishna. The doers: the one hundred devotees of German ISKCON. The activity: sankirtana, congregational chanting.

As for the fifth ingredient, the will of God, that is always most certainly there in a Hare Krishna festival. Krishna had not only encouraged our Heidelberg festival, but in His form of Lord Caitanya He had said, “In every town and village of the world My name will be heard.” Not only had He given His sanction, but, as God, omnipotent in will, He had declared that it would be done. Therefore the festivals go on because God Himself is sponsoring them. Our part is simply to become His devotees and arrange them on Krishna’s behalf. Otherwise Krishna will get someone else to do it.

There is always the question of money. In ordinary political rallies, millions of dollars are spent for propaganda to elect an unknown man as leader. We are also making propaganda, but for the real leader—God, or Krishna. The Vedas say that God is the leader of all living entities. To make this fact known, we are prepared to collect unlimited amounts of money and spend it to glorify Krishna. In material life, an insignificant person tries to make himself God by artificial propaganda. But in spiritual life one accepts his position as infinitesimal in comparison to God; he accepts that he is an eternal servant of God and spends all his intelligence and energy-whether in the shape of money, strength or whatever-to praise God.

If we want to be happy and peaceful, this is the simple formula we should keep in mind: God is the creator of all things, the proprietor of all things and therefore the natural enjoyer of all things. He is also the only one qualified to be the true friend of everyone. The mistake of the materialist is that he tries to use everything for his own sense gratification. He takes himself as God, the proprietor and enjoyer of everything, but because he does not have the power of God, he is always in anxiety, trying to fulfill his false desires.

When one is actually enlightened as to his constitutional position in relation to God, he tries to please the Lord, and by this endeavor the Lord is pleased to reveal Himself. Krishna says, “As one surrenders unto Me, I reveal Myself accordingly.”

There is no meaning to life without Krishna, just as there is no meaning to one’s hand unless it is properly connected to the whole body. In material life one is disconnected from Krishna, and this is a most unfortunate plight. Therefore it is the aim of the Hare Krishna festivals to bring those who have forgotten Krishna back to their original connection with Krishna through the simple chanting of the transcendental sound vibration Hare Krishna, Hare Krishna, Krishna Krishna, Hare Hare/ Hare Rama, Hare Rama, Rama Rama, Hare Hare.

Singing, dancing and eating in Krishna’s service, under the direction of an expert spiritual master, are all spiritual activities, and those who participate become surcharged with spiritual consciousness. Not only the performers of the festival but also those who come to listen, and even the place where it is conducted, all become sanctified and blissful. Every one should try to become active, somehow or other, in this movement of Krishna consciousness by devoting his life, money or intelligence to Krishna. Or, if nothing more, one can at least chant Hare Krishna, Hare Krishna, Krishna Krishna, Hare Hare/ Hare Rama, Hare Rama, Rama Rama, Hare Hare.