Back to Godhead > ~Featured~ > God of the Fools

God of the Fools

As in the present day, throughout history many cheaters have falsely claimed to be incarnations of God, and naive followers have acclaimed them. This excerpt from Srila Prabhupada’s Krishna Book tells of the fate of one such fraudulent incarnation. 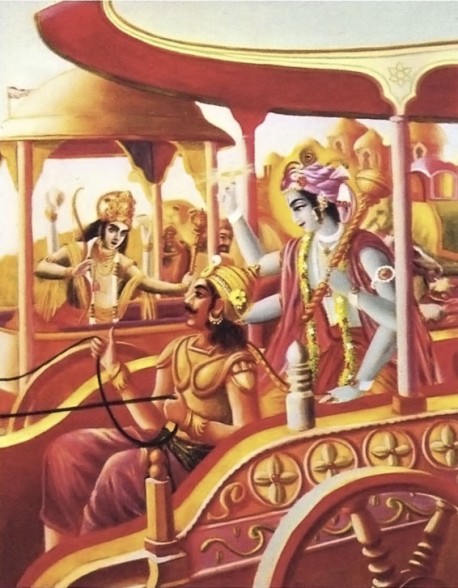 Surrounded by many foolish persons, this rascal Paundraka had actually concluded that he was Vasudeva, the Supreme Personality of Godhead. This kind of conclusion is certainly childish. When children are playing, they sometimes create a king amongst themselves, and the child so selected thinks that he is the king. Similarly, many foolish persons, due to ignorance, select another fool as God, and then the rascal considers himself God, as if God could be created by childish play or by the votes of men. Under this false impression, thinking himself the Supreme Lord, Paundraka sent his messenger to Dvaraka to challenge the position of Krishna. The messenger reached the royal assembly of Krishna in Dvaraka and conveyed the message given by his master, Paundraka. The message contained the following statements.

“I am the only Supreme Personality of Godhead, Vasudeva. There is no man who can compete with me. I have descended as King Paundraka, taking compassion on the distressed conditioned souls out of my unlimited causeless mercy. You have falsely taken the position of Vasudeva without authority, but You should not propagate this false idea. You must give up Your position. O descendant of the Yadu dynasty, please give up all the symbols of Vasudeva which You have falsely assumed. And after giving up this position, come and surrender unto me. If out of Your gross impudence You do not care for my words, then I challenge You to fight. I am inviting You to a battle in which the decision will be settled.”

When all the members of the royal assembly heard this message sent by Paundraka, they laughed very loudly for a considerable time. After enjoying the loud laughter of all the members of the assembly, Krishna replied to the messenger as follows. “O messenger of Paundraka, you may carry My message to your master: He is a foolish rascal. I directly call him a rascal, and I refuse to follow his instructions. I shall never give up the symbols of Vasudeva, especially My disc. I shall use this disc to kill not only King Paundraka but all his followers also. I shall destroy this Paundraka and his foolish associates, who merely constitute a society of cheaters and cheated. When this action is taken, foolish King, you will have to conceal your face in disgrace, and when your head is severed from your body by My disc, it will be surrounded by meat-eating birds like vultures, hawks and eagles. At that time, instead of becoming My shelter as you have demanded, you will be subjected to the mercy of these low-born birds. At that time your body will be thrown to the dogs, who will eat it with great pleasure.”

The messenger carried the words of Lord Krishna to his master, Paundraka, who patiently heard all these insults. Without waiting longer, Lord Sri Krishna immediately started out on His chariot to punish the rascal Paundraka. Because at that time the King of Karusa was living with his friend the King of Kasi, Krishna surrounded the whole city of Kasi.

King Paundraka was a great warrior, and as soon as he heard of Krishna’s attack, he came out of the city along with two aksauhini divisions of soldiers. The King of Kasi was also a friend to King Paundraka, and he came out with three aksauhini divisions. [An aksauhini phalanx consists of 21,870 chariots, 21,870 elephants, 106,950 infantrymen and 65,600 cavalrymen.] When the two kings came before Lord Krishna to oppose Him, Krishna saw Paundraka face to face for the first time. Krishna saw that Paundraka had decorated himself with the symbols of the conchshell, disc, lotus and club. He carried the Sarnga bow, and on his chest was the insignia of Srivatsa. [These are all ornaments of Lord Krishna.] His neck was decorated with a false Kaustubha jewel, and he wore a flower garland in exact imitation of Lord Vasudeva. He was dressed in yellow colored silken garments, and the flag on his chariot carried the symbol of Garuda, exactly imitating Krishna’s. He had a very valuable helmet on his head, and his earrings, like swordfish, glittered brilliantly. On the whole, however, his dress and makeup were clearly imitation. Anyone could understand that he was just like someone onstage playing the part of Vasudeva in false dress. When Lord Sri Krishna saw Paundraka imitating His posture and dress. He could not check His laughter, and thus He laughed with great satisfaction.

The soldiers on the side of King Paundraka began to shower their weapons upon Krishna. The weapons, including various kinds of tridents, clubs, poles, lances, swords, daggers and arrows, came flying in waves, and Krishna counteracted them. He smashed not only the weapons but also the soldiers and assistants of Paundraka, just as during the dissolution of this universe the fire of devastation burns everything to ashes. The elephants, chariots, horses, and infantry belonging to the opposite party were scattered by the weapons of Krishna. The whole battlefield became scattered with the bodies of animals and chariots. There were fallen horses, elephants, men, asses and camels. Although the devastated battlefield appeared like the dancing place of Lord Siva at the time of the dissolution of the world, the warriors who were on the side of Krishna were very much encouraged by seeing this, and they fought with greater strength.

At this time, Lord Krishna told Paundraka, “Paundraka, you requested Me to give up the symbols of Lord Visnu, specifically My disc. Now I will give it up to you. Be careful! You falsely declare yourself to be Vasudeva, imitating Myself. Therefore no one is a greater fool than you.” From this statement of Krishna’s it is clear that any rascal who advertises himself as God is the greatest fool in human society. Krishna continued: “Now, Paundraka, I shall force you to give up this false representation. You wanted Me to surrender unto you. Now this is your opportunity. We shall now fight, and if I am defeated and you become victorious, I shall certainly surrender unto you.” In this way, after rebuking Paundraka very severely. He smashed his chariot to pieces by shooting an arrow. With the help of His disc He separated the head of Paundraka from his body, just as Indra shaves off the peaks of mountains by striking them with his thunderbolt. Similarly, He also killed the King of Kasi with His arrows. Lord Krishna specifically arranged to throw the head of the King of Kasi into the city of Kasi itself so that his relatives and family members could see it. Krishna did this just as a hurricane carries a lotus petal here and there. Lord Krishna killed Paundraka and his friend Kasiraja on the battlefield, and then He returned to His capital city, Dvaraka.

When Lord Krishna returned to the city of Dvaraka, all the Siddhas from the heavenly planets were singing the glories of the Lord. As far as Paundraka was concerned, somehow or other he was always thinking of Lord Vasudeva by falsely dressing himself in that way, and therefore Paundraka achieved sarupya, one of the five kinds of liberation, and was thus promoted to the Vaikuntha planets, where the devotees have the same bodily features as Visnu, with four hands holding the four symbols. Factually, his meditation was concentrated on the Visnu form of Krishna, but because he thought himself to be Lord Visnu, it was offensive. After being killed by Krishna, however, that offense was also mitigated. Thus he was given sarupya liberation, and he attained the same form as the Lord.