Back to Godhead > Science > Bhakti-Yoga as Nonmechanistic Science 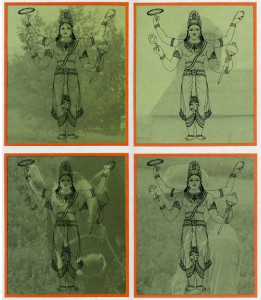 Philosophies based on mundane sense perceptions lead us to believe that God must be remote and inaccessible – if He exists at all.

SADAPUTA DASA studied at the State University of New York and Syracuse University and later received a National Science Fellowship. He went on to complete his Ph.D. in mathematics at Cornell, specializing in probability theory and statistical mechanics.

The term science refers to knowledge we can reliably verify by practical methods. So to study a subject scientifically, we must clearly understand how to use our senses to obtain trustworthy knowledge of what we are studying. This article, which concludes a series from the forthcoming book Mechanistic and Nonmechanistic Science, examines how a person can take advantage of his innate transcendental senses to obtain direct knowledge of the Supreme Personality of Godhead, Krsna, who is the ultimate object of study in the science of bhakti-yoga.

One of the basic principles of bhakti-yoga, or devotional service, is that the Absolute Truth is not an impersonal void but rather the Supreme Person, full of variegated attributes. The Supreme Person, Krsna, possesses unlimited personal qualities, and He also performs unlimited transcendental activities in reciprocation with the innumerable jivatmas (living beings) who enjoy His association in a state of pure consciousness. The goal of one who practices devotional service is to revive that state of pure consciousness and enter Krsna’s personal association.

Service to Lord Krsna can take many forms, but since becoming aware of our relationship with Krsna requires that we first hear about Him. the process of hearing (sravanam) is fundamental. Hearing about the attributes and pastimes of Krsna reminds the materially conditioned jivatma of his own natural relationship with the Lord. Gradually, as the jivatma continues hearing, his desire to know about Krsna increases, and simultaneously his attachment to the affairs of the material body and mind diminishes. 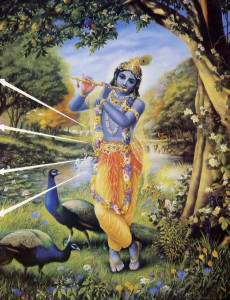 Yet according to Bhagavad-gita all phenomena issue forth from the energy of Krsna, the Supreme Personality of Godhead , whose energy is nondifferent from Himself.

The philosophy of bhakti-yoga holds that knowledge of the Absolute must descend directly from the Absolute. Krsna is the original source of all material forms, and He is also the source of the literature of bhakti-yoga. This literature consists of scriptures that are either directly produced by Krsna Himself or else written by persons who are directly linked with Krsna in a transcendental relationship. Bhagavad-gita is a scripture of the former type, and Srimad-Bhagavatam and Caitanya-caritamrta are scriptures of the latter type. As we have already pointed out (BACK TO GODHEAD, Vol. 16, No. 9), the subject matter of bhakti-yoga is preserved and disseminated by a community of gurus and sadhus (highly advanced souls), whose role in the regulation of transcendental knowledge is like that of the community of experts in a scientific field.

All literature is simply information encoded in sequences of symbols, and unlimited amounts of information about Krsna can be encoded in this form. But since Krsna is all-pervading, information about Him differs from information describing ordinary configurations of matter. In our everyday experience we encounter patterns of symbols arranged according to the conventions of a language so as to represent certain events in a limited region of time and space. When we hear or read this information we are able to interpret the coded patterns, and as a result we become aware of a mental image of the events. But this mental image is something quite different from the events themselves.

In contrast, when a jivatma perceives information describing the Supreme Person, the resulting mental images actually bring the jivatma into direct contact with the Supreme Person. Since Krsna is all-pervading, images and sounds representing Krsna are nondifferent from Krsna Himself, and the jivatma can directly understand this identity when free of his material conditioning. Such understanding cannot, of course, be simply a matter of manipulating material symbols; it directly involves the higher sensory and cognitive faculties of the conscious self.

Since this point is quite important, let us explore it in greater detail. According to the philosophy of Bhagavad-gita, nothing is different from Krsna and yet nothing is Krsna except His own primordial personality. This seeming paradox is resolved in the following way: Krsna is the cause and the essence of all phenomena, and in this sense all phenomena are identical with Him; yet the phenomena of this world are merely external displays projected by Krsna’s will, and His real nature is His eternal personality. The Absolute is highly specific, and therefore only certain symbolic patterns, and not others, can represent Krsna. By means of these patterns Krsna can make Himself available to the conditioned jivatma, and thus these material configurations are, nondifferent from Krsna in a direct personal sense. Such configurations remind the jivatma of Krsna, by whose mercy the jivatma soon revives his own higher vision and can see the Lord directly. 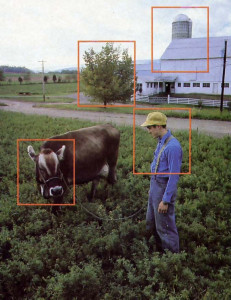 Even though transcendental to all material manifestations, Krsna is personally present every where through His expansion as Visnu, ”the all-pervading one.” So perceiving Krsna is not difficult for one who knows how to employ one’s senses properly

This explanation may convey some idea of how the embodied jivatma, restricted entirely to material modes of sense perception, can begin to perceive the transcendental Supreme Person. In the initial stages of bhakti-yoga, the jivatma’s perception of Krsna may seem to be completely dependent on the interactions of matter, but the essence of the jivatma’s experience is not material. We can begin to understand this by considering that matter itself is a manifestation of Krsna and that material perception is simply a limited, impersonal way of seeing Him.

In the highest stage of realization, the reciprocation between the jivatma and Krsna has nothing to do with the material manifestation. This relationship does not depend on the material body of the jivatma in any way, and it continues after the body has ceased to exist. According to the philosophy of bhakti-yoga, the material manifestation represents only a minor aspect of the total reality. There is a higher realm, inaccessible to material sense perception but nonetheless full of variegated form and activity. Since we are concerned here with how a materially embodied person can acquire knowledge, we shall not discuss this higher realm in detail. (Readers interested in this subject may consult Srimad-Bhagavatam and Sri Caitanya-Caritamrta.)

The process of sravanam, or hearing, is complemented by the process of kirtanam, or glorifying the Lord by singing or reciting His names, qualities, and pastimes and by discussing these with others. We have argued (back to godhead, Vol. 16, No. 10) that the process of bhakti-yoga is scientific in the sense that it is a practical method of obtaining verifiable knowledge about the Absolute Truth. In the science of bhakti-yoga, however, the researcher approaches the Absolute with an attitude of reverence and devotion, in stark contrast to the aggressive and exploitative approach prevalent in modern science. By glorifying Krsna, the jivatma can awaken his natural love for Krsna, and then Krsna will be fully accessible to him on a personal level.

The Sanskrit term mantra refers to a pattern of sound that has a purifying effect on the mind. The Hare Krsna mantra consists of two names of the Supreme Person (Krsna and Rama) and one name of His energy (Hara). Grammatically the mantra is in the vocative case, so it is, in effect, an address to the Lord and His energy.

The names that constitute the Hare Krsna mantra are examples of patterns of symbols that directly represent the absolute person and therefore have an absolute, inherent meaning. According to the philosophy of bhakti-yoga, Krsna’s holy names are nondifferent from Krsna Himself, and one who chants and hears these names is brought into personal contact with Him. A person who has awakened his higher sensory capacities can actually perceive Krsna in His name. For others, the chanting of Krsna’s names purifies them by reminding them of Krsna, and thereby brings about this awakening.

One can obtain the results of chanting the holy names of the Lord by using any names that are actually connected with the Supreme Person and that are not mere concoctions of the material imagination. In His Siksastaka (Eight Verses of Instruction), Sri Caitanya Mahaprabhu, the great teacher of bhakti-yoga who appeared in India in the fifteenth century, describes the significance of chanting the holy names of God:

O My Lord, O Supreme Personality of Godhead, in Your holy name there is all good fortune for the living entity, and therefore You have many names, such as “Krsna” and “Govinda,” by which You expand Yourself. You have invested all Your potencies in those names, and there are no hard and fast rules for remembering them. My dear Lord, although You bestow such mercy upon the fallen, conditioned souls by liberally teaching Your holy names, I am so unfortunate that I commit offenses while chanting the holy name, and therefore I do not achieve attachment for chanting. (Siksastaka 2).

From this statement we see that the conditioned jivatma, benumbed by his preoccupation with the material mind and senses, will initially feel little desire to chant the Lord’s holy names. Yet by regularly chanting the holy names and following the regulative injunctions of bhakti-yoga, the jivatma gradually awakens his transcendental taste for the name and attains the stage of loving reciprocation with Krsna.

Since the goal of one who chants the names of God is to develop love for Him, one must chant with an attitude compatible with this emotion. Caitanya Mahaprabhu described this attitude as follows:

One who thinks himself lower than the grass, who is more tolerant than a tree, and who does not expect personal honor but is always prepared to give all respect to others, can very easily always chant the holy name of the Lord. (Siksastaka 3).

Generally a person who has no direct knowledge of the Supreme Person cannot understand at first what it might mean to love the Supreme. But such a person can lay the groundwork for this understanding by adopting a nonexploitative attitude toward the Supreme Person and His creation. Indeed, this attitude is the key to success in bhakti-yoga. For one who wishes to exploit the Supreme, the Supreme will remain unknowable. But if one truly gives up the desire for such exploitation, then the Supreme Person will reveal Himself by His own mercy.

Once, in a letter to Max Born, Albert Einstein declared that his goal was to capture the Absolute Truth. Unfortunately, Einstein went about it the wrong way. The Absolute Truth cannot be forcibly captured by a minute part of the Absolute, but according to the philosophy of bhakti-yoga, the Absolute can be captured by love. Once one attains this love, direct knowledge of the Absolute becomes readily available. Yet, ironically, the development of this love is incompatible with the desire for knowledge or power. Knowledge is indeed a by-product of the process of bhakti-yoga, but it cannot be the goal of that process, for the key to the process itself lies in a fundamental reassessment of one’s innermost goals.

Although superficially this reassessment may seem simple, carrying it out requires a deep insight into one’s own psychology. By bringing the inner self into personal contact with the Absolute, the process of bhakti-yoga enables one to attain this insight. Only by this means can one capture the Absolute—once all desire to conquer the Absolute has been forsaken.