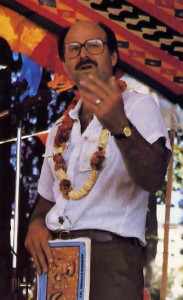 Vancouver—The Ratha-yatra Festival of the Chariots, celebrated here annually for the last five years by the International Society for Krishna Consciousness, has apparently won the hearts of British Columbia’s officialdom. After this year’s gala procession of chariots carrying carved Deity forms of Lord Jagannatha (Lord of the Universe), His sister Subhadra, and His brother Balarama, Mayor Michael Harcourt praised the festival with these words:

“On this great occasion of Ratha-yatra … I should like to offer my best wishes on behalf of the city of Vancouver. . . . The Vedic culture is one of the oldest known to mankind, and this Ratha-yatra is one of its most ancient and colorful festivals. It is a joyous occasion for all peoples, regardless of race, religion, or creed. In Canada, especially, the East Indian community has contributed a great deal to the development of a great multicultural Canadian nation. Festivals such as this, preserved and taken from the heart of the Indian culture, show the great spiritual heritage that India has to offer to the rest of the world. Therefore, I am happy to convey my greetings and best wishes to ISKCON on this auspicious Ratha-yatra Festival.”

The premier of British Columbia, Bill Bennet, sent his best wishes for the festival through Peter Hyndman, minister of consumer and corporate affairs.

Hare Krsna Ministry Counsels the Living and the Dying

Washington, D.C.—The volunteer ministrations of a Hare Krsna devotee to terminally ill Hindu patients and their families at Children’s Hospital here so impressed directors of the intensive-care unit that they sponsored an interfaith conference on death and dying with the devotee as principal speaker.

Conference coordinator Cheryl Finkelstein told Alankara dasa, of the International Society for Krishna Consciousness (ISKCON), “We have been very impressed with your work in crisis situations. You project a kind of rapport and professionalism that we have never experienced before, although many other members of the clergy come here in the same role of counselor. You have taught us all a lot.”

At the conference, which also included a Roman Catholic nun, a Muslim clergyman, and a Jewish rabbi, Alankara explained that the Vedic literature gives the most scientific and practical knowledge available anywhere about the soul and the experience of death. “Life does not end at the death of the body,” he said. “The self, or soul, is eternal and enters into a new body after the death of the old one. According to the Vedic literature, the sense of hearing is the last to fail at death, and the dying person feels the most excruciating pain at the lamentation of his family members. Therefore we encourage the family to read from the scriptures by the patient’s bedside. The patient should hear the glories of God and, if possible, chant His names. This spiritual process helps the patient overcome fear as he faces death and gives him a chance to escape the cycle of birth and death altogether.”

Alankara’s talk prompted this appreciation from Dr. Alien Fields, director of the intensive-care unit: “Your talk has given us new light on the care of the dying, and as time goes on I hope to see many of the practices you outlined incorporated by clergy of all faiths.”

“It has been both an honor and a pleasure for me to study the scholarly translations of Vedic literature by His Divine Grace A.C. Bhaktivedanta Swami Prabhupada. I consider His Divine Grace a worthy successor to the exalted school of metaphysics enunciated by Srila Vyasadeva. By reference to the profound commentaries of such an eminent author, Western philosophers will better understand the thinking of intellectuals of the stature of Plato, Aristotle, St. Thomas Aquinas, Kant, Hegel, and Heidegger, and modern statesmen will gain the necessary knowledge by which to establish a just and united society.”