Back to Godhead > ~Featured~ > Exposing the Cult of Artificial Intelligence

Exposing the Cult of Artificial Intelligence

In a society of robots,
synthetic minds may seem only natural. 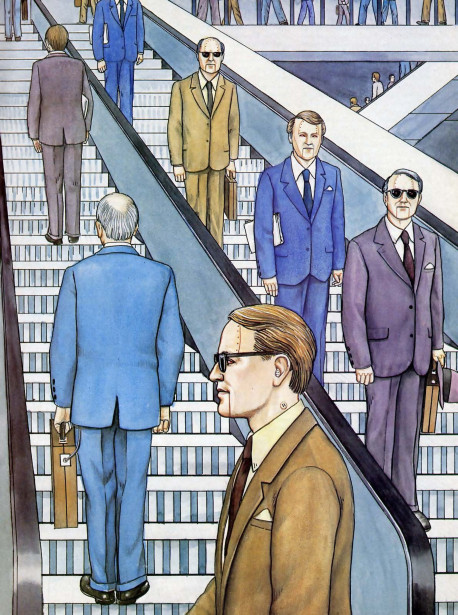 Last April a meeting took place in Milan, Italy, between a researcher in artificial intelligence and Srila Bhagavan Goswami, one of the disciples of His Divine Grace A.C. Bhaktivedanta Swami Prabhupada who has become a spiritual master for new disciples. What follows is an excerpt from their conversation.

Srila Bhagavan Goswami: How many scientists are working in the field of artificial intelligence?

Scientist: Well, there is a large contingent at M.I.T, and also at Stanford. And then there are smaller numbers at institutions across the United States. And, of course, the Japanese and the Russians have put a lot of effort into this field. So, I would say from one thousand to two thousand scientists are working on artificial intelligence full time.

Srila Bhagavan Goswami: So it is a very highly skilled field. Out of billions of people, only a few million are scientists, and out of those, only two thousand or so are working on artificial intelligence. Two thousand scientists engaged in creating artificial” intelligence, for which natural intelligence is the template.

In artificial intelligence there is logic. Agreed?

Srila Bhagavan Goswami: You may take one tiny part of the creation and master it. Krsna will allow you that. But even that takes great intelligence. That is why sincere scientists always agree with the motto “The more you know, the more you realize how much you don’t know.”

Srila Bhagavan Goswami: By science one should demonstrate the existence of God, not try to disprove it. We are not against science, but we urge that everything be used in the pursuit of the Absolute Truth—to gain greater appreciation of God. The scientist should be the greatest worshiper of God, because he can know in the greatest detail the mastery of God. The ideal scientist is like the artist who tries to duplicate the beauty of a flower through sculpture, painting, or poetry but still knows his work of art is just an imitation of God’s creation. In other words, one should appreciate how great the original creator is and not try to artificially take His position.

Scientist: Yes. I see your point.

Srila Bhagavan Goswami: A scientist likes to analyze things in a certain way. There is nothing wrong with that, provided his analysis ultimately leads to his establishing his relationship with God, who for Him is the Supreme Scientist. For someone else God is the Supreme Artist; for someone else, the Supreme Poet, and so on. Everyone is attracted to something in this material world that gives him his idea of the Supreme, but where do all these ideas of perfection come from?

Obviously, our ability to build an intelligent machine is far from perfect. Mechanically, you may make artificial, cybernetic intelligence, but can you make one machine love another machine? Can you make one machine be compassionate toward another machine? So we are limited by nature. We shouldn’t become proud savants, thinking we can do everything because we can do one little thing imperfectly. Knowledge should make us humble, not proud.

No matter how hard the scientists work, they are a long way from creating a person. You make the little connections on your computer board and tie in one circuit to another and program in some information, but when you compare that mechanical circuit to the little neurons in the brain, which do you find is the superior creation? Both circuits are doing basically the same thing, but which is the superior creation? Who is the real mastermind, the artificial intelligence researcher or God?

We should ask ourselves why this logic doesn’t prevail among scientists. It is because so many scientists are envious of God. That is why this logic is not apparent to them. By envious we mean that they are trying to figure out by their science how we can manipulate and enjoy this material world. But actually the real law of nature is that we are the subordinate enjoyers; our enjoyment is relative, dependent on God’s enjoyment. We are dependent, relative truth, and God is independent, Absolute Truth. Relative truth depends on the Absolute Truth and is meant to serve the Absolute Truth. But when we don’t want to accept that position, everything becomes illogical. Instead of appreciating the creator of our natural intelligence and using that intelligence to serve Him, we use it to create a robot with artificial intelligence.

People are being manipulated by the modes of nature just as you manipulate your robots. A robot just doesn’t go and do whatever it wants. You manipulate it. Similarly, those who are acting with artificial intelligence are being manipulated by the modes of nature—ignorance, passion, and goodness. These robotlike people are forced to act according to the attraction and repulsion of the senses and the sense objects. Everyone is moving mechanically: “I hate this.” “I like that.” “I eat this.” “I don’t eat that.” Even though they know smoking cigarettes is not good, they smoke. Robots. No feeling. A robot performs mechanical acts without feeling. So people can kill animals, even their own children, because they are acting mechanically, with no feelings. They can go through the mechanical processes—eat, sex, kill, sleep—but without real feeling. So the problem is that there are too many robots already. That is why there is no feeling in society.

Just like robots, people want to have a relationship with matter. A robot cannot relate person-to-person; it must relate matter-to-matter. So when people don’t see that the actual active principle in a human being is consciousness, the soul within the body, then they relate to themselves and others like robots. Even if you program one robot to love another, and the first robot embraces the second, is there any feeling? Similarly, if a person simply relates to another person as if he were his body, this relationship is on the robot platform.

In Sanskrit this kind of relationship is called sparsa, and sense gratification is called samsparsaja-bhoga, “the enjoyment that comes from rubbing skin.” Basically, the same elements that are in skin are in your robot. But when a body, a bag of skin, is lying dead, no one wants to rub it; everyone wants to get rid of it. So actually it is the active spark of life, the soul within the body, that we are attracted to. Without you, the robot is useless, and without the soul in the body, the body is useless. That soul, the active principle in the body, is the real person.

Krsna explains all of these ideas in Bhagavad-gita, which is a great science. He says, adhyatma-vidya vidyanam: “Of all sciences, I am the science of the soul.” There are so many sciences, but out of all of them the supreme science is that which teaches how to discover the self, the real person, and how to liberate this person from birth and death. This science takes real intelligence. And that intelligence comes from Krsna. So the real thing is not to create artificial intelligence, which is already there in the billions, but to lift people up from artificial intelligence to real intelligence, from robotic character to real human character. This is a greater service.

One Response to Exposing the Cult of Artificial Intelligence