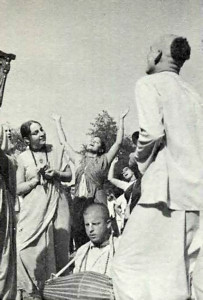 The Los Angeles Sankirtana Party usually goes to the downtown area to preach and chant during the week, but since it was Thanksgiving Day, Sankirtana Party was held at Griffith Park where large crowds of people gathered to enjoy the sun, music, friendship and dancing. The devotees of Krsna do not celebrate Thanksgiving only one day a year: we give our prayer of thanks every day and every waking moment. We try to show our gratitude to the Lord by offering Him loving service eternally. 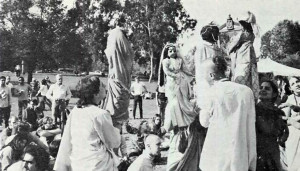 When the Sankirtana Party arrived at Griffith Park on this sunny day, the purpose of its members was to spread the holy name of God to their brothers and sisters. According to the scriptures, everyone is searching for God but most of us are temporarily trapped in maya or illusion. The mass of colorful devotees advancing on the scene was beautiful to the eye; and for the ear there was the sound of transcendental conchshell, sweet mrdanga drum and kartals (hand cymbals)—and the loud and sweet singing of the Hare Krsna mantra. Because Krsna is all-attractive, His name is transcendentally powerful; thus large crowds were immediately attracted. The paraphernalia brought to the park and on all sankirtana parties includes a large picture of Krsna and one of Prabhupada, the spiritual master. When one looks upon these pictures he can actually see Krsna and Prabhupada themselves! The picture of Krsna and the divine person Krsna are nondifferent. Our transcendental paraphernalia also includes incense, Back to Godhead Magazine, cards and leaflets. We are engaged in inviting people to sing Hare Krsna and to visit the temple of Sri Sri Radha-Krsna. We are bringing paraphernalia to attract all the senses. Through seeing pictures of Krsna and Prabhupada and seeing the devotees in person, one is attracted to Krsna by the sense of vision or of sight. By hearing the Hare Krsna mantra, one is attracted by the sense of hearing. By smelling the incense and flowers offered to God, one is attracted by the sense of smell. By tasting the spiritual prasadam, or food offered to God, one is attracted by the sense of taste. By touching the instruments used for God, or clapping one’s hands or touching japa beads, one is attracted by the sense of touch. We want to share these jewels of transcendence with all living entities so they can become self realized and worship God in full joy. If all the senses are not utilized for the satisfaction of God, they will be used for the satisfaction of the temporary body and thereby trap us in the cycle of birth, death, old age and disease. If one is bound by the temporary pleasure of this body, he will not be able to transcend this material nature upon leaving this body. And what’s more, he risks being thrown into a lower form of life, like the plant or animal, and may be forced to live on more hellish planets. 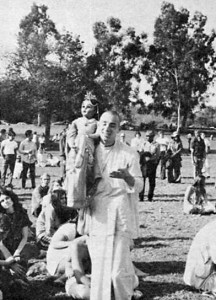 When the devotees placed themselves in an auspicious spot at Griffith Park, about three hundred people gathered around in a big circle; and the devotees began to sing and dance with great ecstasy. A few of the spectators began to sing and dance, and more and more joined as time went on. Soon a group of about thirty people joined hands and held a circle-dance, intertwining among the devotees and the crowd. The joy of chanting Hare Krsna is that one is spontaneously attracted and can immediately feel the joy emanating from God. It is stated in the Bhagavad-gita that Krsna dwells as supersoul in the heart of every living entity; the moment one starts to chant Hare Krsna, the love of God lying dormant in his heart is at once revived. Our souls are crying out to be revived, so let us tend to the needs of our souls by singing the names of God. The people who were sitting and listening were certainly being spiritually benefitted by hearing the sound of God’s name, and we encouraged everyone please sing the Hare Krsna mantra! God is pleased when we sing His name, and in this age of Kali there is no other way to please God. If we call out to Krsna and praise His energy and pray for His mercy, He will protect and guide us back home, back to Godhead. 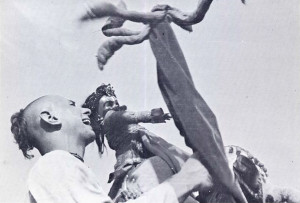 By showing the picture of Prabhupada to the men and women and children at Griffith Park, we introduced them to the guru whose teachings are available to everyone on this earth. His Divine Grace A.C. Bhaktivedanta Swami is here to teach us how to enter the kingdom of God. He holds the secret treasure and is bringing it out in the open for all. We cannot fully appreciate the nectar of transcendental fruit until we know something of the creator of that fruit. The more you love Krsna, the more He will love you and guide you back to home, back to Godhead. 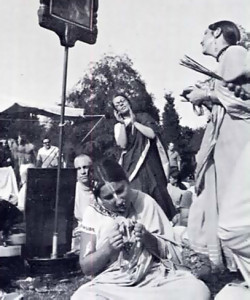 After the circle-dance, the puppet show began. Visnujana das is an expert puppeteer, and he put on a beautiful puppet show that attracted not only the children but the adults as well. In addition, the show carried the highest knowledge. The puppets were sleeping in their beds in the tent until they were aroused to put on their show. They looked lovely in their brightly colored clothes of silk and satin covered with pretty jewels. With perfect precision and illuminating facial expressions, Visnujana put on a puppet show that normally would have taken five people to perform. He flashed back and forth like lightning, expressing the quality of each puppet, and thus the puppets became alive. Everyone there couldn’t help but be amazed. The devotees were excited like little children and were making some of the sounds of the different puppets. 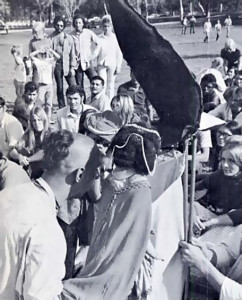 The play was about the gopi girlfriends of Krsna. Radha, who is the most beloved gopi of Krsna, and Her associates Visakha and Lalita are talking amongst themselves. Radha is saying to Her friends; “Oh dear friend Lalita, sweet Visakha, Oh search out that Krsna.” And Her friends call out: “Syamasundara, are You near Your beloved river Yamuna resting Your blue body?” “Search near the Govardhana Hill, gopis,” Radha says. “My beloved does not know where to place Himself. He cannot distinguish bad places from good.” Lalita and Visakha console Her. “Oh dear Queen Radha, be patient, for Krsna is not localized, He is all-pervading. He is in the sky, He is in the water, He is the supersoul in everyone’s heart.” Radha says, “Alas for us, fair gopis, what have we to offer this Lord Krsna when He owns our very soul?” 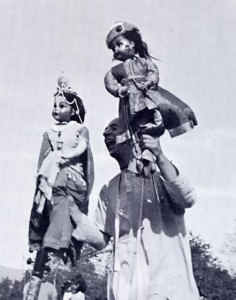 After the gopis, other puppets were presented. The last part of the puppet show was the exciting story of Bakasura, the voracious stork. His voice was ferocious, as he was a terrible demon. One day Krsna and Gopala and other cowherd boyfriends were playing and looking for something exciting to do. Gopala found a cave and said, “Let’s play in here.” The cave was actually the huge mouth of Bakasura, and the demon stork was planning to devour Krsna and His cowherd boyfriends. As soon as they stepped inside, the stork closed his mouth and said, “Now I’ve got You, Krsna, You and Your friends. There is no way out.” The boys were not scared, because they knew Krsna would save them. Within the stork’s mouth, Krsna expanded His body to gigantic size, thus suffocating the demoniac stork to death. Then Krsna and His friends began to rejoice and sing Hare Krsna. The puppet show was captivating and thrilling. Afterwards many people chanted Hare Krsna with us, and there was some preaching of the philosophy of Krsna consciousness. The crowd seemed to enjoy themselves. 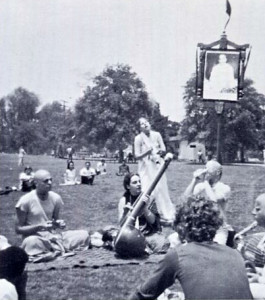 It was a blissful day at Griffith Park; it is so nice when many people and children join in and share this great joy of God. The joy that we all felt was just a drop of nectar from the vast ocean of the eternal bliss of Krsna consciousness. You will be seeing more and more of the devotees of Krsna at the parks, colleges and market areas. Whenever you hear the ringing of the kartals, the sound of the mrdanga drum and the chanting of Hare Krsna, join in with us and help to spread love of God. 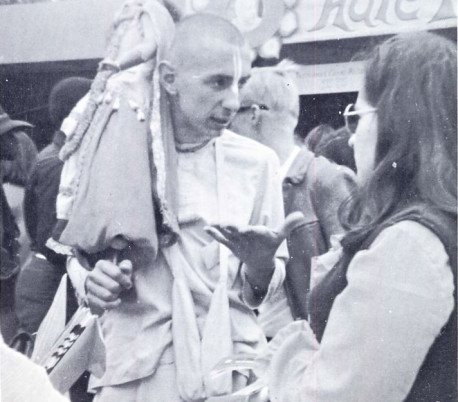