Poem by Srila Prabhupada on His First Arrival in the USA 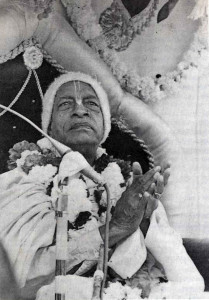 The spiritual master and founder of the International Society for Krishna Consciousness, His Divine Grace A.C. Bhaktivedanta Swami Prabhupada, is now engaging thousands of men and women in America and throughout the world in the science of bhakti-yoga, transcendental loving service to God. Prabhupada had no personal motive in first beginning ISKCON; he so vigorously preaches the philosophy of God consciousness simply because he has been ordered to do so by his own spiritual master, Srila Bhaktisiddhanta Sarasvati Gosvami Maharaja.

His Divine Grace A.C. Bhaktivedanta Swami Prabhupada first arrived in the United States in 1965 with seven dollars, a letter of introduction to an Indian family in Pennsylvania, and a suitcase with some volumes of Srimad-Bhagavatam. In the following poem, written in Bengali on the day of his arrival in the USA, Srila Prabhupada addresses the Supreme Lord Krsna, asking Him His purpose in sending His servant to America. The translation from Bengali was done by Srila Prabhupada himself.

My dear Lord Krsna, You are so kind upon this useless soul, but I do not know why You have brought me here. Now You can do whatever You like with me.

But I can guess that You have some business here, otherwise why should You call me to this demoniac place?

Most of the population here is covered by nature’s modes of ignorance and passion, and I do not know how they will be able to understand the transcendental message of Vasudeva.

But I know that Your causeless mercy can make everything possible because You are the most expert mystic.

Therefore, I am simply praying for Your mercy so that I can be able to convince them about Your message.

All living entities have come under the control of the illusory energy by Your will, and therefore, if You like, by Your will they can also be released from the clutches of illusion.

If You so desire, I wish that You may deliver them ; just by Your desire they will be able to understand Your message.

The words of Srimad-Bhagavatam are Your incarnation, and if they receive them in submissive aural reception, repeatedly, then they will be able to understand Your message.

In the Srimad-Bhagavatam, First Canto, Second Chapter, verses seventeen through twenty-one, it is said: “For anyone who gives aural reception to the always auspicious transcendental messages about You by hearing and chanting, You become a special well-wisher, and thus, remaining within his heart, You clear up all inauspicious understanding. When such inauspicious understanding is almost cleared up, a person realizes the importance of devotional service. In that stage of understanding, the influence of the modes of ignorance and passion becomes almost nil, and the resultant action of passion and ignorance can no more attack the heart; thus he becomes joyful, being situated on the platform of goodness. When, by dint of devotional service, he thus becomes jubilant due to awakening the modes of goodness, he becomes liberated from material contamination and is able to understand the science of God. In this stage of liberation, all misgivings in the heart, or the bondage of the material network, become cut to pieces, and by the science of God he is elevated from all sorts of doubts. At this stage the result of past activities becomes vanquished because of his realization of the Supreme Lord.”

This is the process of becoming liberated from the influence of the modes of ignorance and passion, and thus they can become freed from all inauspicious things accumulated in the heart.

But because I am very unfortunate, unqualified, and the most fallen, I am therefore seeking Your benediction so that I may be able to convince them about this Krsna consciousness.

Somehow or other, You have brought me here to speak about You. Now it is up to You to make me a success or failure, as You like.

You are the Lord of the whole creation, so if You like You can make my power to speak suitable, so that they can understand.

By Your causeless mercy only my words may become transcendentally pure, and I am sure that when such a transcendental message penetrates their hearts, certainly they will feel engladdened and thus become liberated from all unhappy conditions of life.

I am just like a puppet in Your hands; You have brought me here, and now You can make me dance as You like.

I have no devotion, nor have I any knowledge, but still I have been designated Bhaktivedanta. Now if You like You can just fulfill the real purport of Bhaktivedanta.