Back to Godhead > Devotees > Chanting > The Mahamantra and the German Expedition

The Mahamantra and the German Expedition

Lord Caitanya Mahaprabhu, the golden avatara, the embodiment of Sri Sri Radha-Krsna in the aspect of a devotee, appeared 484 years ago to deliver the pure essence of the Vedic literatures to the entities of this Age of Quarrel. He brought God consciousness from behind locked doors into the streets and into the hearts of everyone. He showed the importance of sincerity in our service to God. This eternal loving service is the highest religion, over and above any limited sectarian faith. 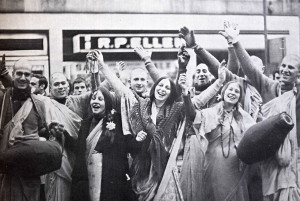 The most ecstatic group in the world – the London devotees, on Oxford Street.

Many people became overwhelmed with happiness and felt, “I must give this to my friends.” Although He agreed that this was a nice proposal, Lord Caitanya insisted that it must be given in its pure and unpolluted form. For this reason He taught the six great Gosvamis of Vrndavana how to impart this love of Krsna purely, and thus they instructed the impeccable Srimad-Bhagavatam and Bhagavad-gita. Today these scriptures have reached us without adulteration through the parampara disciplic line, which hands us the precious fruit from the top of the Vedic tree, branch by branch, each spiritual master cradling the fruit so as not to damage it. This line of teacher-disciple is alive today in His Divine Grace A.C. Bhaktivedanta Gosvami Prabhupada, who, at the request of his spiritual master, has brought this divine message of singing, dancing and offering spiritual foodstuffs to the glory of the Lord.

On request of Srila Prabhupada, his disciples are carrying this joyous spiritual plan to everyone they meet, thus fulfilling the prophecy of Lord Caitanya Mahaprabhu that the holy names will be sung in every town and village.

The ways of illusion are very deceiving, like the shifting sands, but this maha-mantra can solidify and pacify the restless mind and body, and in this way the years of collected dust covering the soul are swept away. “When one is enlightened with the knowledge by which nescience is destroyed then his knowledge reveals everything, as the sun lights up the daytime. When one’s intelligence, mind, faith and refuge are all fixed in the Supreme, then one becomes fully cleansed of misgivings through complete knowledge and thus proceeds straight on the path of liberation.” (Bg. 5.16-17)

“Haribol!” is now being heard in the streets of London, the concertgebouw of Holland, on the riverbanks of Paris, and in the sin-filled Raperbahn of Hamburg. This process, called bhakti-yoga, is for everyone, everywhere, irrespective of birth or material qualifications. Simply serve with your God-given talents, be sincere in chanting the holy names, and soon all entanglements will fall away. The devotees are overjoyed at the prospect that Srila Prabhupada may be pleased with our minute service. And when we serve sincerely, others see the results and feel, “Oh, I would like to serve also.” With this feeling, all temporary nonsense falls away. 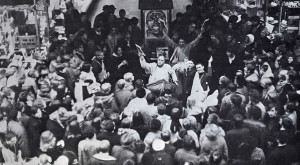 George Harrison also wants to join us in serving Srila Prabhupada. So we sang together in his house and constructed an altar and sang again, and the whole atmosphere was transformed: ecstatic tears flowed from all eyes, and we offered holy prasadam and partook of the remnants, and everyone experienced a little more of the unending bliss of devotion to Krsna. When George asked how this feeling could go on and on, we told of chanting all the time and serving with our natural talents. He knew his engagement to be music and so decided we must record “Hare Krsna” so others could experience this bliss.

It was done in 1968 at E.M.I. studios, and the holy sounds reached around the world to the mountains of Mexico, the fjords of Norway, the shores of Italy, and behind the Iron Curtain, where the record became the number one hit in Yugoslavia, what to speak of all other universes, both spiritual and mundane. Amid the glitter of temporary sense indulgence, this pure sound was heard. The music industry had never encountered a sound as simple or as happy. The president of Capitol Records wrote: “Dear George, I am hooked on ‘Hare Krsna.’ ” At their jobs, both young and old would sing along, many not realizing that they were singing, so deeply had the sound penetrated. 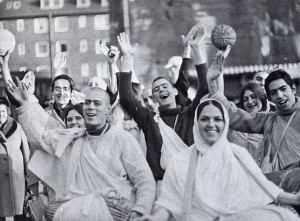 All glories to Lord Krsna! May we serve You, Krsna! My heart, once dirty, now cries like a child to be clean again. Even the young gang members stalking the streets would see us and sing, maybe mocking “Hare Krsna” at first, as the children mocked Lord Caitanya, who merely covered His ears, pretending to be bothered by their mocking cries of Hare Krsna so that they would chant the holy names more. Lord Caitanya’s message is in the sankirtana parties, in which devotees come together in groups and sing and dance the mahamantra in the villages and towns. Pritivitaj jata nagar adi gram. Sarvatra prachar haibe mor Nam: “In every town and village, My name will be sung by all creatures.” This is our movement. We do not keep the precious jewel just for our own benefit. No, we distribute it freely. As the powers of purification and liberation lie in these sixteen words—Hare Krsna, Hare Krsna, Krsna Krsna, Hare Hare/ Hare Rama, Hare Rama, Rama Rama, Hare Hare—why should we keep this to ourselves? 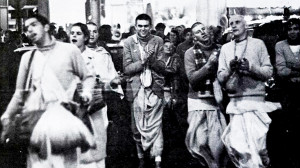 The next day we had the transcendental pleasure of witnessing the Sri Sri Radha-Krsna Temple come to life in Hamburg. The installation ceremony of the Deities was relished by all, and nice prasadam was offered. 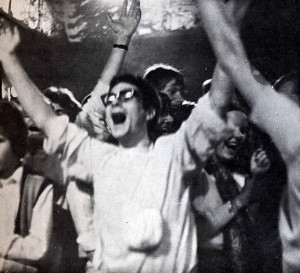 Then again the next day off to Munden and Hereford, walking into the dens of apathetic youth to whom sex and intoxicants are the only outlets to their searchings. At one engagement we turned off the red lights of passion and darkness, put the house lights on, and began to chant, and we jumped into the audience singing (for no one is merely the audience). In this process we are simply a room full of spirit souls singing to our beloved One, Lord Krsna, crying for our divine father, mother, friend, advisor, protector, confidante, savior; everything that we love and relate to personally is enclosed in this transcendental name. We all started jumping and crying Hare Krsna, Hare Krsna, and then the chant ended. We paid our obeisances to Srila Prabhupada and started to leave, but they wanted more. So we chanted more, and again we went to leave, but still they wanted more chanting. So again we began holy sankirtana, and they were jumping and shouting, “Krsna, Hare Krsna!” Everything is purified by association with sankirtana. “Glory to the Sri Krsna sankirtanam which cleanses the heart of all the dust accumulated for years together. Thus the fire of conditional life, of repeated birth and death, is extinguished. This sankirtana movement is the prime benediction for humanity at large because it spreads the rays of the benediction moon. It is the life of all transcendental knowledge, it increases the ocean of transcendental bliss, and it helps to have a taste of the full nectar for which we are always anxious.” 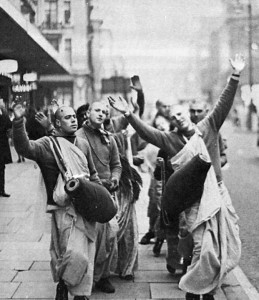 We invite everyone to join with us when you see us in the streets. If you haven’t experienced this yet, you soon will, for these holy names will be sung in your town or village, as prophesized by Lord Caitanya.

Please join with us in glorifying the Lord of the universes by singing His names.

“O my Lord, You are so kind that in Your name You are my constant companion.”