Back to Godhead > ISKCON > Farm Communities > Kirtanananda Swami: Pioneer for a Spiritual Community

The spiritual leader of New Vrindaban
talks of palaces, people, and pure devotion to God. 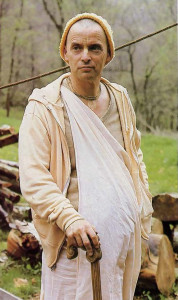 BACK TO GODHEAD: Now that you’ve completed Prabhupada’s Palace, how will you further develop New Vrindaban?

Kirtanananda Swami: In a letter Srila Prabhupada wrote to me in 1974 or ’75, he told me to develop New Vrindaban like Tirupati in south India. But at that time I didn’t know anything about Tirupati; I’d never been there. Last fall I visited the place, which is a whole city located on top of a mountain. It is centered on the temple of Venkatesvara [a form of Krsna] and provides food and shelter for millions of pilgrims who come each year. There are thousands and thousands of cabins and dormitories, all provided for the pilgrims according to their means.

Srila Prabhupada wanted New Vrindaban to be as spiritually opulent and attractive as Tirupati. He wanted our community to be a place of pilgrimage in the Western world, a place where people can come and see spiritual life in action.

BTG: Already thousands of people are coming to New Vrindaban every month to see Prabhupada’s Palace. Do you expect many of them to settle here?

Srila Kirtanananda: No, we’re more concerned that they come and then go away with a change of heart. The real solution to the modern predicament is not that they all settle here and live in New Vrindaban. The solution is that they tune in to Krsna consciousness and take spiritual life back home with them. We want to see that people everywhere put Krsna in the center of their lives. That is the primary characteristic of New Vrindaban, as it is of the original Vrndavana in India, where Krsna appeared five thousand years ago. Vrndavana is the place where everyone is always thinking of Krsna. So Vrndavana is for everyone, everywhere.

BTG: How will you engage those people who do want to live in New Vrindaban?

Krsna consciousness is very practical, because Krsna is very practical. He is the creator of everything; therefore He is the most practical. So the real system of Krsna conscious living is a very simple, practical way of life. Living on the land need not be very complicated. Srila Prabhupada said that if you maintain cows, there will be bulls, and you can use them to till the soil, without needing to employ any artificial source of energy. Full utilization of the cow and the bull is part of the natural system that we think will manifest gradually here at New Vrindaban.

BTG: Kirtanananda Swami, how do you introduce Krsna consciousness to visitors who come to New Vrindaban? 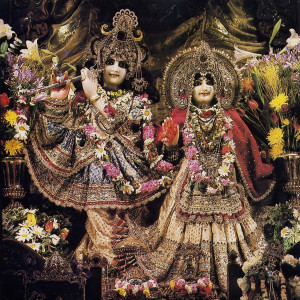 Kirtanananda Swami: By presenting Krsna and Krsna’s pure devotee, Srila Prabhupada, in the most attractive way we can. That’s why we’ve built the Palace. People may come with some motive-either to see a unique place or to enjoy a vacation or for some other reason—but if they become convinced of the value of Krsna consciousness by appreciating its beauty, that is our success. Prabhupada’s Palace is to Prabhupada what a beautiful setting is to a diamond. The Palace is a means of drawing attention to Srila Prabhupada. That will benefit all humanity.

BTG: How is that so?

Kirtanananda Swami: Because no matter how people become acquainted with Srila Prabhupada, they’ll want to know more about him. His books have been distributed for the last twelve years, but sometimes we wonder how many people are reading them. The books may be sitting on the shelves. But if people come to Prabhupada’s Palace and see the beauty of the work and the devotion of those who have worked here, they may take the books down off the shelf and read them. Then Prabhupada can deliver them his mercy.

We have to give people a setting in which they will feel the importance of hearing from Srila Prabhupada. Otherwise they may take him to be just an ordinary man—just some swami, or just some man who started a movement or cult. If they actually see the Palace, they will feel, “This is unique.” And when someone is in a very opulent position, naturally people will listen, because people are attracted by opulence.

BTG: Might one not argue that this is a contrivance, that you could glorify an ordinary man and people would think him important?

Kirtanananda Swami: The difference is this. Prabhupada always said that you can dress a fool up to look like a king, but when he opens his mouth anyone can understand, “Oh, he is a fool.” So if someone is a fool, then there is no use in dressing him up as a king. But if someone is actually a king and you dress him like a king, that is proper. So because Prabhupada actually should be worshiped like this—because he actually deserves this position, because he actually looks right in this position—when he opens his mouth and speaks, it sounds exactly right too. Therefore it is perfect.

BTG: When people visit the Palace, what is it you want them to come away with?

Actually, that is the whole idea—that this will become a place of pilgrimage, where people can come, relax, and make spiritual advancement simply by being here. That is very important. Instead of taking a vacation and going to some useless place, take your vacation and go visit Srila Prabhupada and the Palace, get the world’s best prasadam [spiritual food], and experience real spiritual life.

BTG: Srila Prabhupada visited the Palace when it was under construction and said that it is an expression of the love of the disciple for the spiritual master. Could you explain what this love is, what it means?

Kirtanananda Swami: That is the spiritual master’s mercy, of course. Whatever his son or his young child does, he accepts in that way. Actually I have no love for Prabhupada—but I wish I did, I am simply praying to Prabhupada that if I continue to worship him he will kindly bless me with a little pure love. But certainly these devotees who have built the Palace have great love for Prabhupada. They have sacrificed so much. They’ve been working for years now, winter and summer.

BTG: What is the benefit for them?

Kirtanananda Swami: That is the nature of love. When you serve your beloved, your service itself is the benefit. When you speak of a “labor of love,” for the lover it is not work. It is all joy. Therefore Prabhupada said, “In Krsna consciousness there is no work.” Actually that is a fact—it is all love. Therefore it is all joy. There is only singing, dancing, and feasting in Krsna consciousness. Whatever a devotee speaks, that is poetry. Whatever a devotee eats, it is a feast, because Krsna has first tasted it. So there is singing, there is feasting, and there is dancing. Simply vibrate the Hare Krsna mantra—Hare Krsna, Hare Krsna, Krsna Krsna, Hare Hare/ Hare Rama, Hare Rama, Rama Rama, Hare Hare—and you will dance your whole life through.

BTG: In many rural communes, people are searching for alternative sources of energy. Do you plan to use such things as solar or wind power in New Vrindaban?

Kirtanananda Swami: We have no energy shortage, because we are using all our energy to serve Krsna. God is the Supreme Energetic. In Him there has been no decrease in energy since time immemorial. If there is any energy shortage in the world, it is simply due to a lack of Krsna consciousness. We are showing people how to make contact with the source of all energies, Krsna, the Supreme Lord. If they get that idea, it will solve all their problems. After all, whether you burn coal or use wind power, there is basically no difference. The real question is, What is the source of the coal power and the wind power? When you make contact with the source, then all your energy problems are solved. We have no faith that this so-called ecological movement is going to solve the problems of the world. The problems brought about by a complicated technological society are automatically solved when there is Krsna consciousness, because Krsna consciousness means plain living and high thinking. But without Krsna consciousness, no one will agree to live simply; by some means or other one will try to exploit nature.

BTG: Throughout American history there have been many rural communities set up along more or less socialistic or communistic lines. Is New Vrindaban something like them?

Kirtanananda Swami: We are not communists, nor are we capitalists: we are Krsna’s servants. The capitalists are claiming, “This land is ours,” and the communists are claiming, “No, it is ours.” So there is no difference; they are simply opposite sides of the same coin. They both want to exploit the resources of material nature for sense gratification. But a Krsna conscious person says, “No, the land is not yours to exploit; it is Krsna’s.” Everything is meant for Krsna’s enjoyment, because He is the creator, the maintainer, and the proprietor of everything. We are all eternally His servants. This is Krsna consciousness.

BTG: What are some of the future plans for New Vrindaban?

Srila Kirtanananda: At the old Vrindaban farm, we are planning to construct a scaled-down replica of the original Vrndavana in India. It will have many gardens, about twenty dioramas depicting Krsna’s pastimes, replicas of the holy ponds Radha-kunda and Syama-kunda, and other holy places. As I mentioned before, we also plan to build residential quarters for tourists and pilgrims, as well as recreation facilities and shops.

But our main project for the immediate future is Radha-Vrndavanacandra’s Palace, a huge temple for the presiding Deities here at New Vrindaban. We will construct it in the central area of New Vrindaban, near Prabhupada’s Palace.

Kirtanananda Swami: It will be 140 feet high and 600 feet long-three times as high and seven times as long as Prabhupada’s Palace. Altogether, the new temple will have four floors. The first floor will contain Radha-Vrndavanacandra’s temple room, bedroom, greeting room, and dining room. On the second floor (but not directly above Radha-Vrndavanacandra’s altar) there will be a men’s dormitory and a rooftop restaurant. The basement will house a Radha-Vrndavanacandra museum, and the sub-basement will contain a gymnasium. We’re going to landscape the temple grounds with a lake and formal gardens. Sometimes Their Lordships will tour the grounds on a chariot thirty feet high.

BTG: When will the cornerstone be laid?

Kirtanananda Swami: In the spring of 1982.

BTG: You advertise New Vrindaban as being a spiritual Disneyland. Does that mean it will encompass some of the features of Disneyland, such as rides?

Kirtanananda Swami: Yes, we may have some rides—perhaps pony rides or ox-cart rides. If they help people remember Krsna, they are good. The difference is that Disneyland is meant for sense gratification and Krsnaland is meant for learning about Krsna.

BTG: Twelve years ago New Vrindaban was just one small house and a lot of mud. Now it is lakes, gardens, and Prabhupada’s Palace. How amazing! Will New Vrindaban’s growth in the next twelve years be even more amazing?

Srila Kirtanananda: Why not!