A New Frontier for Krsna Consciousness 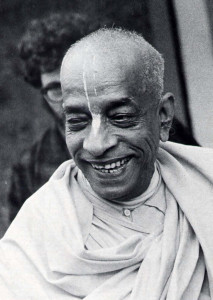 With Krsna consciousness flourishing on New York’s Lower East Side, Srila Prabhupada felt he could entrust the New York center to his followers and expand the movement west. His envoy, Mukunda dasa, had found a place for a temple in San Francisco’s Haight-Ashbury district, and now Srila Prabhupada was on his way to new preaching adventures.

As the United Airlines jet descended on the San Francisco Bay area, Srila Prabhupada turned to his disciple Ranacora and said, “The buildings look like matchboxes. Just imagine how it looks from Krsna’s viewpoint.”

Srila Prabhupada was seventy-one years old, and this had been his first air trip. Ranacora, nineteen and dressed in a suit and tie, was supposed to be Srila Prabhupada’s secretary. He was a new disciple but had raised some money and had asked to fly to San Francisco with Prabhupada.

During the trip Srila Prabhupada had spoken little. He had been chanting.

“Hare Krsna, Hare Krsna, Krsna Krsna, Hare Hare/ Hare Rama, Hare Rama, Rama Rama, Hare Hare.” His right hand in his cloth bead bag, he had been fingering one bead after another as he chanted silently to himself. When the plane had first risen over New York City, he had looked out the window at the buildings growing smaller. Then the plane had entered the clouds, which to Prabhupada had appeared like an ocean in the sky. He had been bothered by pressure blocking his ears and had mentioned it; otherwise he hadn’t said much, but had only chanted Krsna’s names over and over. Now, as the plane began its descent, he continued to chant, his voice slightly audible—”Krsna, Krsna, Krsna-and he looked out the window at the vista of thousands of matchbox houses and streets stretching in charted patterns in every direction.

When the announcement for United Airlines Flight 21 from New York came over the public-address system, the group of about fifty hippies gathered closer together in anticipation. For a moment they appeared almost apprehensive, unsure of what to expect or what the Swami would be like.

Roger Segal: We were quite an assorted lot, even for the San Francisco Airport. Mukunda was wearing a Merlin the Magician robe with paisley squares all around, Sam was wearing a Moroccan sheep robe with a hood—he even smelled like a sheep—and I was wearing a sort of blue, homemade Japanese samurai robe with small white dots. Long strings of beads were everywhere. Buckskins, boots, army fatigues, people wearing small, round sunglasses—the whole phantasmagoria of San Francisco at its height.

Only a few people in the crowd knew Swamiji: Mukunda and his wife, Janaki; Ravindra Svarupa; Raya Rama—all from New York. And Allen Ginsberg was there. (A week before, Allen had been one of the leaders of the Human Be-In in Golden Gate Park, where over two hundred thousand had come together—”A Gathering of the Tribes … for a joyful pow-wow and Peace Dance.”) Today Allen was on hand to greet Swami Bhaktivedanta, whom he had met and chanted with several months before on New York’s Lower East Side.

Swamiji would be pleased, Mukunda reminded everyone, if they were all chanting Hare Krsna when he came through the gate. They were already familiar with the Hare Krsna mantra. They had heard about the Swami’s chanting in the park in New York, or they had seen the article about Swamiji and the chanting in the local underground paper, The Oracle. Earlier today they had gathered in Golden Gate Park—most of them responding to a flyer Mukunda had distributed—and had chanted there for more than an hour before coming to the airport in a caravan of cars. Now many of them—also in response to Mukunda’s flyer—stood with incense and flowers in their hands.

As the disembarking passengers entered the terminal gate and walked up the ramp, they looked in amazement at the reception party of flower-bearing chanters. The chanters, however, gazed past these ordinary, tired-looking travelers, searching for that special person who was supposed to be on the plane. Suddenly, strolling toward them was the Swami, golden-complexioned, dressed in bright saffron robes.

Prabhupada had heard the chanting even before he had entered the terminal, and he had begun to smile. He was happy and surprised. Glancing over the faces, he recognized only a few. Yet here were fifty people receiving him and chanting Hare Krsna without his having said a word!

Mukunda: We just had a look at Swamiji, and then we bowed down—myself, my wife, and the friends I had brought, Sam and Marjorie. And then all of the young men and women there followed suit and all bowed down to Swamiji, just feeling very confident that it was the right and proper thing to do.

The crowd of hippies had formed a line on either side of the narrow passage through which Swamiji would walk. As he passed among his new admirers, dozens of hands stretched out to offer him flowers and incense. He smiled, collecting the offerings in his hands while Ranacora looked on. Allen Ginsberg stepped forward with a large bouquet of flowers, and Srila Prabhupada graciously accepted it. Then Prabhupada began offering the gifts back to all who reached out to receive them. He proceeded through the terminal, the crowd of young people walking beside him, chanting.

At the baggage claim Srila Prabhupada waited for a moment, his eyes taking in everyone around him. Lifting his open palms, he beckoned everyone to chant louder, and the group burst into renewed chanting, with Prabhupada standing in their midst, softly clapping his hands and singing Hare Krsna. Gracefully, he then raised his arms above his head and began to dance, stepping and swaying from side to side.

To the mixed chagrin, amusement, and irresistible joy of the airport workers and passengers, the reception party stayed with Prabhupada until he got his luggage. Then they escorted him outside into the sunlight and into a waiting car, a black 1949 Cadillac Fleetwood; Prabhupada got into the back seat with Mukunda and Allen Ginsberg. Until the moment the car pulled away from the curb, Srila Prabhupada, still smiling, continued handing flowers to all those who had come to welcome him as he brought Krsna consciousness west.

The Cadillac belonged to Harvey Cohen, who almost a year before had allowed Prabhupada to stay in his Bowery loft. Harvey was driving, but because of his chaffeur’s hat (picked up at a Salvation Army store) and his black suit and his beard, Prabhupada didn’t recognize him.

“Where is Harvey?” Prabhupada asked.

“Oh, is that you? I didn’t recognize you.

From Srila Prabhupada-lilamrta, by Satsvarupa dasa Goswami. © 1981 by the Bhaktivedanta Book Trust.