Back to Godhead > Devotees > Obituary for Devotees Killed in Car Crash 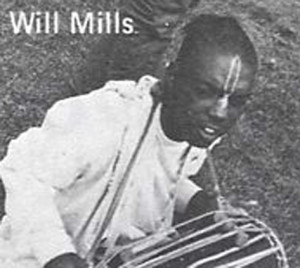 Our spiritual master, His Divine Grace A.C. Bhaktivedanta Swami Prabhupada, and his disciples of the International Society for Krishna Consciousness, acknowledge the loss to our movement, within recent months, of two prominent disciples, Ramanjana dasa Adhikari and Jananivasa dasa Brahmacari, and of an uninitiated Krsna conscious devotee, Will Mills.

Of course, the passing away of a devotee engaged in devotional service is not comparable to the passing away of someone engaged in ordinary affairs. We can understand from Bhagavad-gita that even if he has not reached the perfectional stage of Krsna consciousness, a devotee is still in an advantageous position at the time of death. If he is advanced on the spiritual path, he will go to Krsna, and if he is not so advanced, he will take an auspicious birth in a family of wealthy aristocrats or devotees and thus have the opportunity to continue developing his Krsna consciousness in the next lifetime. 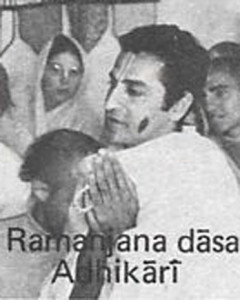 Ramanjana dasa, who received his education at Georgia University and later accepted a post as Professor of Anthropology at the Oregon College of Education, met His Divine Grace Srila Prabhupada in January of 1971, was initiated in August of that year, and engaged as a devotee in the Hare Krsna movement until his untimely death. He was killed in an automobile accident. 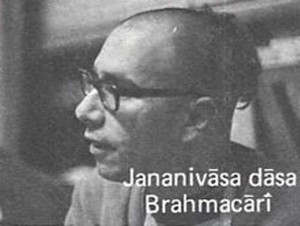 Jananivasa dasa, who was initiated on August 19, 1969, was President of the Columbus, Ohio, center of ISKCON and a contributor to Back to Godhead. He and a devotee companion, Will Mills, an uninitiated disciple, were killed in an automobile accident. Srila Prabhupada commented, “On one side we have to be very sorry if our dear friends are taken from this world, but on the other we should be satisfied, for a pure devotee is never lost.”

One Response to Obituary for Devotees Killed in Car Crash