Back to Godhead > ~Featured~ > An Address of Welcome in Vrindavana

An Address of Welcome in Vrindavana

The Supreme Personality of Godhead, Krsna, appeared in India 5,000 years ago in the town of Vrndavana. He came down from the spiritual sky with His eternal associates, pastimes and paraphernalia—and He brought His eternal abode with Him. There is no difference between the Vrndavana on this earth and the Vrndavana in the spiritual sky, for when Krsna comes He brings His eternal abode with Him. As recorded in the scripture Srimad-Bhagavatam, for 125 years Lord Sri Krsna displayed His loving pastimes in the natural setting of Vrndavana with His cowherd girl friends, His consort Srimati Radharani, His cowherd boy friends and other associates. These pastimes are described in the Krsna Books by His Divine Grace A.C. Bhaktivedanta Swami Prabhupada.

The land of Vrndavana is still existing in India, and 500 years ago Lord Caitanya sent His intimate disciples the Gosvamis to identify the places where Krsna performed His pastimes, such as the River Yamuna where He fought the demon Kaliya, the forest where He danced with the gopis, and the famous Goverdhana Hill which He lifted to protect the residents of Vrndavana. Vrndavana, however, remained little known to the people of the rest of the world.

Before coming to the United States in 1965 on the order of his spiritual master, His Divine Grace A.C. Bhaktivedanta Swami Prabhupada stayed in the Radha-Damodara Temple established in Vrndavana by the Gosvami followers of Lord Caitanya and there worked on his translations of Vedic literature. Now, since 1965, he has been traveling, especially in the western part of the world. In the last two years, devotees of ISKCON, led by Srila Prabhupada, have gone to India to establish centers, and recently Srila Prabhupada went with a group of devotees to visit Vrndavana and show them through the eyes of a pure devotee the place of Krsna’s pastimes.

The residents of present-day Vrndavana greeted Srila Prabhupada with great pride. Srila Prabhupada wrote in a letter, “The officials and residents of Vrndavana have greeted us very nicely, and they are simply astounded to see our sankirtana party chanting with great jubilation through the city streets. Before I went to the Western countries, no one there knew about Vrndavana. Now hundreds of visitors from the U.S. come here to see Krsna’s place.”

In his purports to Caitanya-caritamrta, Srila Prabhupada has written: “In Vrndavana, all the inhabitants are Vaisnavas [devotees of Krsna] . They are all auspicious because somehow or other they always chant the holy name of Krsna. Even though some of them do not strictly follow the rules and regulations of devotional service, on the whole they are devoted to Krsna and chant His name, directly or indirectly. Purposely or without purpose, even when they are passing on the street they are fortunate enough to exchange greetings by saying the name of Radha or Krsna. So directly or indirectly they are auspicious. The inhabitants of Vrndavana do not know anything but the worship of Radha and Krsna.”

The addresses of welcome printed on this and the following pages were offered to Srila Prabhupada by the prominent residents of Vrndavana when His Divine Grace visited the city during his tour of November 1971. 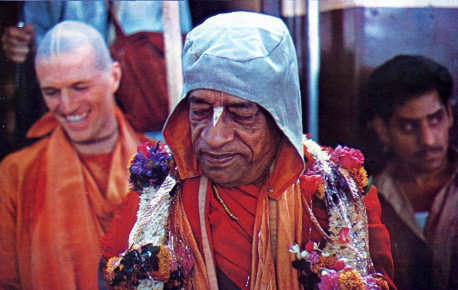 India is well known as the land of religion, and the heart of this transcendental land is Sri Vrndavana. This is the place of the pastimes of Sri Sri Radharani, the central figure of the rasa dance, and of Sri Krsna, the worshipable Lord of Radharani. Thus, this transcendental holy land of Vrndavana is the center for cultivation of religion, culture, austerity and devotional service. It is not that Sri Vrndavana-dhama is so accepted in modern days alone—it has existed as such since time immemorial. In this holy land of Vrndavana, we the inhabitants of Vrndavana, who are known as Vrajabhasis, hereby welcome you and offer you this humble address.

According to the Vedic system there are three ways for self-realization. They are known as knowledge, fruitive activities and devotional service. We have an immense treasure house of transcendental knowledge in the form of four Vedas, 108 Upanisads and eighteen Puranas, over and above the Mahabharata and Vedanta-sutras. They are so important that by taking a fractional portion of this treasure of transcendental knowledge, other coutnries all over the world have become proud of their spiritual understanding. We know that you have full authority in the treasure house of spiritual knowledge, yet still you have taken shelter of the most exalted process of devotional service.

O chief of understanding transcendental mellowness,
It is needless to mention that the devotional service in Vrndavana is the topmost of its kind because it is based on madhurya-rasa, or conjugal love between Radharani and Krsna. Certainly this transcendental mellowness is mentioned in the Upanisads, where it is indicated that Krsna is the reservoir of all pleasure. This Vedic injunction is fully manifested in the devotional service of conjugal love in Vrndavana in every street, lane and temple of Vrndavana and most perfectly in Vamsivata and Kesi Ghat or in the temples of Sri Govindaji, Sri Madana-Mohanaji, Sri Radha-Damodaraji and the many other temples of the Lord. All these places are undoubtedly places of pilgrimage for many liberated devotees. We know that for many years you sat in the Radha-Damodara Temple and worshiped Her Majesty Srimati Radharani in a meditative mood, and thus you now have the transcendental vision to deliver the entire world. As proof of your perfection, we can see these foreign devotees before us, and we feel very proud to see how you have transformed them into such pure devotees.

O great preacher of Vedic culture,
Formerly, a great many svamis went to foreign countries, but now you have wonderfully preached the sankirtana movement and the sublime philosophy of the bhakti cult in the Western countries, and that is the only means for giving peace and prosperity to all people of the world in this age. For preaching religion and culture, your holy name will remain ever dazzling.

O most revered Svamiji,
To speak frankly, we feel a very intimate relationship with you, and we feel perfect satisfaction at this time to be privileged to present to you this address of welcome. We take it for granted that you are one of us in Vrndavana. We are sure that wherever you travel you must carry with you the impression of Sri Vrndavana-dhama. In other words, the culture, religion, philosophy and transcendental existence of Sri Vrndavana-dhama travel with you. Through the great message that Your Holiness carries, all the people of the world are now becoming very intimately rerlated with Vrndavana-dhama. The relationship between Vrndavana and the people of the world is actually the highest perfection of religious and cultural life because the message of the mercy of Radharani and Krsna is the topmost of all knowledge. We are certainly sure that throught your preaching alone the transcendental message of Vrndavana will spread all over the world. May you be crowned with success in these noble activities.

We beg to remain Yours most obediently,
Chairman of the Vrndavana Municipality, Its Members and Secretaries, and the Citizens of Vrndavana-dhama
29 November 1971

O preacher of the Sankirtana Movement,

In the Srimad-Bhagavatam it has been declared that chanting of the holy name of the Lord is the essence of all Vedic literature, and there is no alternative method of delivering the fallen souls of this age, known as Kali-yuga.

You are acting in exact accord with this message of Srimad-Bhagavatam in the line of disciplic succession, and it is a glorious attempt that you have undertaken in preaching the magnificent action of the holy name of the Lord. May this determination of yours be blessed with success all over the universe. That is the prayer of all Vaisnavas in Vrndavana. We sincerely hope that your noble attempt in this line of action will be crowned with laurels.

This is an attempt to unify the whole world on the one platform of Krsna consciousness. At present, all political movement is centered around the idealism of the United Nations. Men are talking of internationalism, but by practical experience it is found that no other attempt but this Krsna consciousness movement will be able to unite all nations of the world. None of the political dreamers have become as successful as you.

Seeing the results of your activities, every one of us now believes that in the very near future all the nations of the world will be overwhelmed by the transcendental vibrations of the chanting of the Hare Krsna mantra. Through this movement, men forget their artificial and inimical concepts of life. Gradually they will take to this auspicious movement, breaking all artificial barriers and limitations of human understanding. We firmly believe that through this movement everyone will become a lover of the Supreme Lord and thus a lover not only of all society but of all other living entities.

Today we, the inhabitants of Vrndavana known as Vrajabhasis, all combinedly offer our humble welcome to Your Holiness in this holy place of Vrndavana, and in doing so we feel very proud. We all pray to the Supreme Queen of Vraja Srimati Radharani, the principal figure in the transcendental rasa dance of Sri Krsna, that She may be pleased with you and bestow upon you at least 100 years of age. Thus may Radharani’s most lovable Krsna, who is also known as Syamasundara, bless Your Holiness to go on continually preaching the transcendental glories of the Lord, for in this way the entire universe may constantly chant His holy name, after receiving it from your mouth, and thus surcharge the entire atmosphere with purity and love of God. By this method the polluted atmosphere of the world will be completely changed, and the situation of pure love and ecstasy will prevail without a doubt.

We beg to remain all Yours sincerely,
the Inhabitants of Brajabhumi
Sd. Govinda Pathak