Back to Godhead > Devotees > Chanting > Meditation in the age of quarrel

Meditation in the age of quarrel 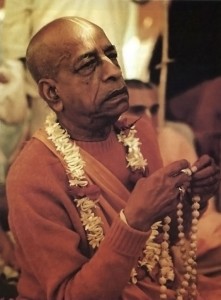 THE MEDITATION BUSINESS is flourishing. Soon, it appears, every suburban town will have its regular classes in yoga meditation for health and freedom from neuroses, and every college campus will have its yogi in residence. But despite the popularity of meditation as put forward by various yogis and meditation societies, few people know the true meaning of meditation. According to the Vedic scriptures, the original source from which knowledge of yoga flows, most forms of meditation are virtually impossible to perform in the modern world, and therefore one should learn to meditate by the simple method of chanting and hearing the Hare Krishna maha-mantra.

One may find the Vedic directions for true meditation in the Sixth Chapter of Bhagavad-gita, which explains that the goal of meditation is to absorb the mind in Krishna consciousness and enable one to see the transcendental four-armed form of Visnu within his heart. This system of meditation entails many difficult austerities. One must sit in a rigid posture in a sacred and secluded place, completely control the body’s urges for sensual gratification, and utterly renounce sex. The scriptures say that such meditation was indeed possible in Satya-yuga, an age long past when men lived for 100,000 years and the celebrated Valmiki Muni, the author of the epic Ramayana, meditated for 60,000 years to achieve perfection. But in the modern age, Kali-yuga, the Age of Quarrel, such meditation is practically impossible because there is no guarantee that one will live for even sixty years. The so-called meditation now practiced in our modern cities may provide a lucrative business for the shrewd few who teach it, but in achieving the real goal of yogic meditation it has no practical value.

Despite the great difficulties of meditation in this age, however, the scriptures describe Kali-yuga’s one great facility:

“This age of Kali is an ocean of faults, but it offers one great advantage: in this age one can attain liberation simply by chanting the holy name of God.” (Srimad-Bhagavatam, 12.3.51)

How To Make Beads 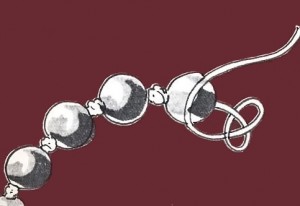 One may chant either loudly so that others may also join in hearing and chanting, or softly on beads for personal meditation. For personal chanting, one may purchase beads in any hobby store. Tie a knot about six inches from the end of a long string, and then string 108 beads, tying a knot after each one. Then pull the two ends of the string through one large head bead, making a total of 109, tie a tight knot right next to the head bead, and cut off the excess string.

How To Chant On The Beads 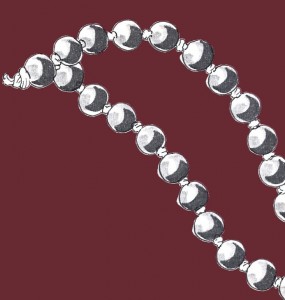 To meditate using the beads, hold them in your right hand. Hold the first bead with your thumb and middle finger and chant the complete maha-mantra—Hare Krishna, Hare Krishna, Krishna Krishna, Hare Hare/ Hare Rama, Hare Rama, Rama Rama, Hare Hare. Then go to the next bead, holding it with the same two fingers, and again chant the entire maha-mantra. Then go on to the next bead and then the next, continuing in this way until you have chanted on all 108 beads and have come again to the head bead. Do not chant on the head bead. Turn the beads around and chant on them in the opposite direction, one after another. By chanting on all 108 beads, from one side of the head bead to the other, you will have completed one “round.”

Although there are no hard and fast rules for chanting, if possible one should try to chant sixteen rounds daily and also give up the four habits of materialistic life: (1) eating meat, fish and eggs, (2) taking intoxicants such as liquor, coffee, tea and cigarettes, (3) indulging in illicit sex (sex performed outside of marriage or with contraceptives) and (4) gambling. To gain the greatest benefit from chanting, one should also read a portion of Bhagavad-gita As It Is every day.

What Is The Maha-Mantra? 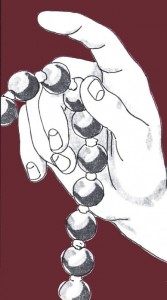 In Sanskrit, maha means “great,” mana means “mind,” and tra means “deliverance.” The maha-mantra, therefore, is the “Great Chanting for Deliverance of the Mind.” Especially in our complex modern society, many unwanted thoughts and anxieties cloud the mind. But the chanting of the holy names of God, or the maha-mantra, cleanses the mind of all unwanted thoughts and simultaneously fixes it upon Krishna, or God.

This fixing of the mind upon God is the basic principle of all meditation, and therefore vibration of the transcendental sound of the Hare Krishna maha-mantra is a simple, authorized and effective method of transcendental meditation. Although the Vedic scriptures recommend many different ways of meditation, such as hafha-yoga, raja-yoga and jnana-yoga, they also conclusively state:

What Is The Effect Of Chanting The Maha-Mantra?

There are three stages of elevation in the chanting of the Hare Krishna mantra. In the first stage, the chanting polishes the mirror of the mind. Like a mirror, the mind has reflective power. It is meant to form clear pictures from the sensations that strike it. But because contact with matter has covered our minds with material contamination, just as dust might cover a mirror, our reflections are no longer clear. The transcendental sound of the holy name of God cleanses the dust from the mirror of the mind, and this automatically brings one to the second stage in chanting.

In the second stage, the chanting frees one from the symptoms of material existence, namely, hankering and lamentation. In material life one hankers for what he does not have-“I want a car, I want a wife, I want money”-and he laments for what he has lost: “I’ve lost my car, I’ve lost my wife, I’ve lost my money,” etc. Regularly chanting Hare Krishna frees one from such twofold anxieties and elevates one to the liberated stage described as follows in Bhagavad-gita (18.54):

“One who is transcendentally situated at once realizes the Supreme Spirit. He never laments nor desires to have anything. Being equally disposed to every living entity, he attains the highest devotional perfection.”

In the third stage of chanting, one attains an all-blissful life (anandamayo ‘bhyasat). When situated on this platform, one is never disturbed by anything. Bhagavad-gita describes this as follows: “In the stage of perfection called samadhi, or trance, one’s mind is completely restrained from material mental activities by practice of yoga. This is characterized by one’s ability to see the self by the pure mind and to relish and rejoice in the self. In that joyous state, one is situated in boundless transcendental happiness and enjoys himself through transcendental senses. Established thus, one never departs from the truth, and upon gaining this he thinks there is no greater gain. Being situated in such a position, one is never shaken, even in the midst of the greatest difficulty. This indeed is actual freedom from all miseries arising from material contact.” (Bg. 6.20-23)

The Absolute Nature Of The Holy Name

God is absolute, and therefore anything directly connected with Him- such as His holy name, form, pastimes, paraphernalia and entourage-is identical with Him. In the material world of duality, things are different from their names. For example, a thirsty man’s calling out “Water! Water! Water!” will not satisfy his thirst because the name water and the substance water are completely different. But in the absolute world there are no such differences; there a thing and its name are one. Therefore simply by vibrating the holy name of God, one associates with God directly.

In the material world we experience this in a crude way when we associate with someone thousands of miles away by radio waves. This same principle works in the spiritual world, but it works perfectly, bringing one beyond the limits of time and space.

Lord Caitanya Mahaprabhu, an incarnation of Krishna, recommended that one chant the maha-mantra twenty-four hours a day and thus make one’s life perfect. He said: “One can chant the holy name of God in a humble state of mind, thinking himself lower than the straw in the street. One should be more tolerant than a tree, devoid of all sense of false prestige and always ready to offer all respects to others. In such a humble state of mind, one can chant the holy name of the Lord constantly.”

Chanting Hare Krishna gradually detaches one from material concepts and brings one to samadhi, a trance in which one realizes the Supersoul (Paramatma) through his transcendental mind and intelligence, without mis-identifying himself with the Supreme. This is the goal of yoga. A living being is called jivatma (the atomic self), and Krishna is called Paramatma (the Supreme Self). In perfect Krishna consciousness, one realizes the eternal relationship between the atomic soul and the Supreme Soul, Krishna.