A brief look at the worldwide activities of 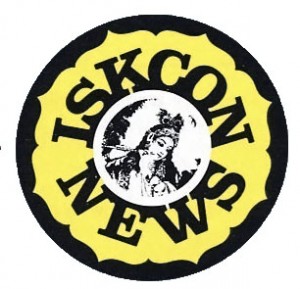 he International Society for Krishna Consciousness 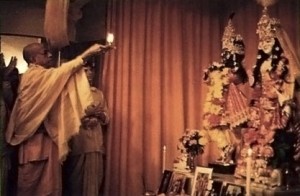 THE SOCIETY has established its new Paris headquarters in a stately four-story building one block from the Arc de Triomphe. Srila Prabhupada personally performed the ceremony installing the temple’s Radha-Krishna Deities. His Divine Grace named the Deity of Krishna “Paris Isvara” (“the Controller of Paris”), in conformity with the Upanisads, which state, isavasyam idam sarvam: “Everything is owned and controlled by the Supreme Lord.”

A PERSONAL FRIEND of the Krishna consciousness movement in England has arranged for the Society to open a temple in a spacious Victorian mansion in Hertsfordshire, half an hour from London. The new center, located on a beautiful 17-acre estate with gardens, clear lakes and a dozen milk-giving cows, has been named “Bhaktivedanta Manor.”

IN LATIN AMERICA, our recently opened center in Buenos Aires already has fifty full-time devotees, the center in Caracas has forty, and the Mexico City branch has seventy-five. Traveling parties of devotees have also been warmly received in Colombia, Trinidad, Guyana, Chile and Brazil. 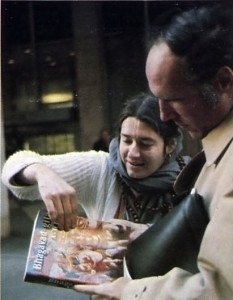 BACK TO GODHEAD, the Hare Krishna movement’s monthly journal, is now available in English, French, German, Spanish, Italian, Japanese, Gujarati, Chinese, Dutch, Swahili and Bali. In English, almost half a million copies are distributed each month. 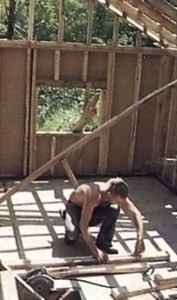 SIX YEARS OLD and continuing to expand, New Vrndavana, the Hare Krishna movement’s model agricultural community dedicated to “plain living and high thinking,” now extends for some 1,000 acres in the hills of West Virginia. Although most of ISKCON’s centers are located in heavily populated cities, the Society has established this simple spiritual village to show that one need not depend upon factories, movies, department stores and night clubs for happiness; one may live peacefully and happily with little more than some land, cows and the association of devotees in a transcendental atmosphere of Krishna consciousness.

In New Vrndavana, everything [s done to please Krishna. The devotees are building gardens and temples, tending the fields, milking the cows and making bread, cheese, butter and yogurt only to please the Lord. Thus New Vrndavana, like the original Vrndavana, Krishna’s own abode in the spiritual world, is a land of pure consciousness. Yet it is not an imaginary place; it is a practical, down-to-earth, working community, only 9 miles from Wheeling.

The Mayapur and Vrndavana International Centers.

WHEN LORD Krishna APPEARED ON EARTH 5,000 YEARS AGO, He appeared in the village of Vrndavana, India. Thus Vrndavana, inconceivably, is nondifferent from the spiritual abode of the Lord. If one goes to Vrndavana, he will immediately feel loving separation from Krishna, who performed such nice activities when He was present there.

Lord Krishna appeared again, 4,500 years after His Vrndavana pastimes, as Lord Caitanya Mahaprabhu. Lord Caitanya, who appeared in the City of Mayapur, India, to spread love of Krishna through the chanting of the Hare Krishna mantra, is actually Krishna Himself, as confirmed by Vedic scriptures. Thus there is no difference between Vrndavana and Mayapur; they are both as good as the spiritual world.

The great spiritual masters in the Krishna conscious chain of disciplic succession have long desired that people from all over the world-of all races, religions and nationalities-be given a chance to visit these holy places and thus revive their dormant love of Krishna. Therefore, to fulfill the desires of his spiritual masters, our spiritual master, His Divine Grace A.C. Bhaktivedanta Swami Prabhupada, is constructing beautiful International Centers for these two holy cities.

The Centers will have modern guest houses, opulent marble temples, schools for instructing the Vedic arts and sciences, gardens, libraries, and galleries of transcendental art. It is an ambitious project, but with the help of ISKCON’s friends and life-members, it is progressing steadily. In Vrndavana, construction of the ISKCON temple of Krishna and Balarama (Krishna’s elder brother) is in full swing, and in Mayapur a palatial four-story guest house has already been completed. The proposed temple in Mayapur, 350 feet high, will have 108 domes. A swirling mural surrounding its central staircase will depict elevation from the material world to the topmost spiritual abode.

In Vrndavana and Mayapur, Srila Prabhupada has directed, chanting should go on twenty-four hours a day, “so that no one will hear any other vibration than the chanting of the holy names of the Lord.” These important International Centers will be special places where people may go for spiritual inspiration and renewal, to return home with fresh insight and the inner peace of Krishna consciousness. Every year in March, ISKCON holds its annual World Meeting at the thirty-acre Mayapur asrama to celebrate the Appearance Day of Lord Caitanya Mahaprabhu. The Society extends to all the readers of Back to Godhead an open invitation to attend this festival. 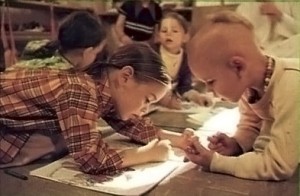 ISKCON’S UNIQUE GURUKULA SCHOOL in Dallas, Texas, now provides a Vedic education for eight young boys and girls. Gurukula has already published two of its own books especially for Krishna conscious children, and more will be forthcoming. The students at Gurukula are becoming expert in reading, writing, arithmetic, Sanskrit and, above all, Krishna consciousness.