Back to Godhead > Devotees > Preaching > Book Distribution > Breaking Through the Clouds

Breaking Through the Clouds 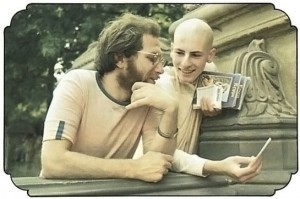 Vanamali dasa leads a party of devotees from ISKCON’s Dallas center who travel all over the U.S.A. distributing Krishna consciousness literature.

It was a big rock concert in Milwaukee, Wisconsin, attended by more than 100,000 people, a panorama of men and women sitting around on a green field, many of them turning on to drugs while waiting for the band to begin. Distributing Back to Godhead, I could see many people around me in the position I used to be in–depressed, despite having made all arrangements for pleasure through music and drugs–and this made me more eager to give everyone the transcendental knowledge of my spiritual master’s magazine.

I was approaching people on the field and exchanging a few words with them to convince them to take a Back to Godhead. One boy no older than sixteen came up and asked me, “Got any grass?”

“I don’t smoke,” I replied, “but here’s something better. Here, take one of these.”

“It’s a magazine about bhakti-yoga. Bhakti means devotion to Krishna. Krishna is a name of God. We’re passing them out for a small donation. Can you give something to help?”

“Sure, I’ll give you all the change I have,” he said, “which isn’t much.” He enthusiastically emptied out his pocket, and along with keys, guitar picks and some small sea shells, he found a quarter and handed it to me.

“Thanks a lot,” I said. “Take this magazine home and read it when you have some time in a thoughtful mood. This is a heavy magazine. Some of it you’ll understand and some you won’t, but I’m sure you’ll appreciate the ideas. You won’t be disappointed.” He smiled, and with mutual feelings of brotherhood, we parted, he with his Back to Godhead and I with another opportunity to act in devotional service, bhakti-yoga.

Having been like them myself not long ago, I could easily identify with those taking part in the scene on the worn grass field. I remembered gathering with them at past concerts, waiting in anticipation and eagerness for a musical miracle to come and clear away the clouds of boredom. As I walked through the crowds, passing out magazines, the musicians onstage made last-minute preparations with the microphones and instruments, and the people in the crowd passed marijuana pipes from one to another in a mood of togetherness, exchanging jokes and smiles. But although it was all supposed to be very wonderful, to me it seemed ultimately a sad and depressing affair. I couldn’t see how any of this could make anyone really happy.

I recalled my old life clearly. I used to wake up each morning not knowing what to do besides go to school. I remembered how I used to watch television, take intoxicants and sleep. I had wasted so much valuable time! I used to talk on the telephone for hours. “What do you want to do tonight?” I would ask my friend.

“I don’t know,” he would answer. “What do you want to do?” and so on. And all the while I thought I was enjoying myself, I had never found anything worth doing. That knowledge was never taught in school; it remained unknown to me.

I remember when I first bought a Back to Godhead from a devotee in Times Square in New York City. The first thing I read was an interview with Srila Prabhupada in which he said: “Everyone is thinking, ‘There are so many problems I have to solve. I have to make this much money. 1 have to do this and that.’ But actually we have no such problems. We are manufacturing these problems. Our only real problem is how to accept Krishna, God. And Krishna is so kind that He says, ‘Yes, accept Me. Simply chant Hare Krishna. I am yours.’ That’s all.” I had read it and thought, “Yes, how to accept Krishna.”

“Hare Krishna! Take one of these,” I chanted, approaching another boy and girl. “Krishna is a name of God. It means ‘the highest pleasure.’ This world is His property; it belongs to Him. And we belong with Him in the spiritual sky. And here, this card invites you to our free Sunday yoga feasts.” A bearded boy looked straight at me with appreciation in his eyes and gave me a quarter to cover the cost of printing. “Thanks,” he said.

“Read it carefully,” I encouraged him. “It’s about what gives life meaning.”

“I’ve been meaning to get one of these,” he said. “Thanks again.”

I walked on, looking for the next person to whom to give a Back to Godhead, remembering slightly how it was when I was in that boy’s shoes, skeptical but open-minded enough for a chance. “Here, take one of these,” I continued. And I felt as if each magazine were a lightning bolt that could break the thickest cloud. I knew each magazine contained the transcendental knowledge of my spiritual master.