The Magic of a Real Guru

Without sleight of hand or word jugglery,
Srila Prabhupada performed the greatest miracle. 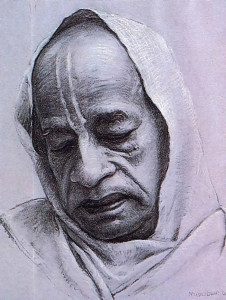 The other day I was at a party and the host was talking about famous magicians and their tricks. Then he mentioned that if a guru could perform magic tricks, he would no doubt enjoy unlimited success. My host reasoned that performing magic would be the guru’s way of telling his disciples, “As you can see, I am superior to you because I have some powers that you do not have; therefore, you should follow me.”

Although I couldn’t agree with my host, I could see the point he was making because I knew from experience that some people will inevitably fall into such a trap. One of the other guests mentioned a certain, guru who did, in fact, perform magic tricks, thus attracting many followers. As this conversation continued, some very sobering thoughts entered my mind.

I recalled the strong statement of’ the Srimad-Bhagavatam (11.3.21): “Any person who seriously desires real happiness must seek a bona fide spiritual master and take shelter of him by initiation.” And another quote from the Vedic literature also came to mind: “To understand transcendental science one must approach a bona fide spiritual master.” This passage goes on to explain that a guru must be brahma-nistha, fixed in God consciousness.

Considering all this, we can see that the foremost qualification of a guru is not that the guru establish his superiority (whether by magic tricks or whatever) but that he establish the superiority of God and be able to arouse the dormant love for God in the hearts of others. Learning about our relationship with God and how to approach God; therefore, should be our purpose in approaching a guru. The only superiority that we should expect the guru to establish about himself is that he loves God above all else, that he has dedicated his life to cultivating and disseminating knowledge of God, and that he follows the disciplic line of pure devotees of God. Such a self-realized soul will not concoct his own philosophy but will strictly adhere to the authorized scriptures. Thus he is a bona fide guru, fit to instruct and initiate disciples.

Certainly a real guru does not need to perform magic tricks to please or impress his disciples. He will not try to please or impress his disciples at all; rather the disciples must try to please and impress him with their sincerity, respect, humility, and service. This is confirmed by Lord Krsna Himself in the Bhagdvad-gita: “Just try to learn the truth by approaching a spiritual master. Inquire from him submissively and render service unto him. The self-realized souls can impart knowledge unto you because they have seen the truth” (Bg. 4.34).

We members of ISKCON have the great fortune of having known, directly or indirectly, a real guru—His Divine Grace A.C. Bhaktivedanta Swami Prabhupada—who set the most glorious example for all .gurus to follow. From his life we can understand that a real guru always directs our attention not to himself but to Lord Krsna. Therefore, although Srila Prabhupada told us very little about himself, what he had to say about Lord Krsna comprises more than fifty volumes and fills thousands of hours of audio and video tapes. Certainly this lack of pride and egoism, this absolute preoccupation with Krsna, is befitting a real guru.

We accept Srila Prabhupada as great because he taught us how God is great. We worship Srila Prabhupada because he has taught us how to worship God. And we are grateful to him for bringing God into the lives of so many sincere people all over the world. We are overwhelmed by the glory of the saint who walked among us, because we see people all around us behaving in a way that is most unsaintly.

A real guru does not compromise. He doesn’t say, for example, “Yes, you can eat the flesh of slaughtered animals. I love you too much to impose any restrictions in your already miserable life. So do whatever you were doing before, but just become my disciple. By becoming my disciple, you need not be overly concerned about following God’s laws.” No. A real guru will give us the bitter medicine of truth. Like a compassionate doctor, he acts in our best interest, even at the risk of not being appreciated. Srila Prabhupada writes in the Bhagavad-gita As It Is, “In the pursuit of self-realization, one has to follow many rules and regulations to control the mind and the senses and to concentrate the mind on the self. All these procedures are very difficult, bitter like poison, but if one is successful in following those regulations and comes to the transcendental position, he enjoys life as though always drinking nectar.” So the restrictions a real guru imposes are necessary and beneficial.

When a guru who does not impose any restrictions on his disciples gains thousands of followers, it is no wonder. But when a guru like Srila Prabhupada—who restricts his disciples from meat-eating, illicit sex, intoxication, and gambling—has as many followers, it’s truly extraordinary. Only a real guru can convince his disciples that life is meant for self-realization, for loving and serving God unconditionally, for plain living and high thinking.

Being Indian, I’m sometimes approached by Westerners who ask my opinion of such-and-such swami or guru. And usually I just refer them to Srila Prabhupada’s books, which I have found competent to answer all questions about spiritual life. Of course, not everyone who inquires about spiritual life is genuinely interested in the real thing. Many people, I find, are more impressed by magic tricks and other material alternatives than by transcendental knowledge and devotion to God. And for those who want to be cheated, Srila Prabhupada has said, Krsna will send a cheater.

Srila Prabhupada’s great desire was that people all over the world would realize the magic in the holy names of God. He wanted us to know that by chanting Hare Krsna we can transform our lives from suffering repeated birth and death to loving God and returning to our original home in the spiritual world.

The life that Srila Prabhupada has given to his followers is beautiful and complete. It is a very open, honest, and practical life of poetry and dance and music, of good and nourishing food, of healthy habits, enriched family relationships, and indispensable knowledge. To transform so many lives in such a powerful, beneficial way is a bit of the real magic of a real guru.

2 Responses to The Magic of a Real Guru