The Logician and Lord Caitanya 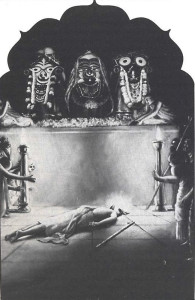 At the age of twenty-four years, Lord Caitanya Mahaprabhu accepted sannyasa, the renounced order of spiritual life, and soon thereafter He set out for the holy city of Jagannatha Puri. Jagannatha Puri is a transcendental city ruled by Krsna Himself in the Deity form of Lord Jagannatha. In temples of Krsna the Lord is always worshiped in His various forms, which are represented in wood, metal, stone, etc. To one who is untrained in the science of Krsna consciousness, such forms appear to be mere statues or idols, but one who knows the science sees Krsna Himself in these forms, not material elements like stone or wood. Thus when Lord Caitanya entered the temple of Lord Jagannatha, He was immediately filled with ecstasy upon seeing the transcendental form of the Deity. He was thinking, “Oh, Krsna! For so long I have wanted to see You, and now I can see You.” Lord Caitanya was so saturated with transcendental bliss that He could not even say the name of Lord Jagannatha but could only call out, “Jaga … Jaga … Jaga …” and in a trance of ecstasy He fell unconscious on the temple floor.

The custodians of the temple were bewildered by the actions of Lord Caitanya, but there was a greatly learned scholar present named Sarvabhauma Bhattacarya who from his studies in scriptural literature could understand that the Lord’s losing consciousness was not an ordinary event but was a rare symptom exhibited only by the most elevated devotees. He therefore asked the custodians of the temple not to disturb Lord Caitanya but to bring Him instead to his home. As a scientist and a scholar, the Bhattacarya wanted to study the entranced condition of the Lord in a systematic way to determine whether His ecstatic symptoms were genuine. He was not the type of man to be influenced by a display of physical symptoms, for he knew that unscrupulous persons may imitate such symptoms in order to gain personal notoriety.

Sarvabhauma Bhattacarya tested the transcendental condition of the Lord in the light of authentic scriptures. He checked His pulse, heartbeat, stomach movements, etc., and found that His bodily functions were all in complete suspension. But when he put a small cotton swab before the Lord’s nostrils, he could see that the cotton fibers moved slightly. Thus he could understand that Lord Caitanya’s trance was indeed genuine, and he began to treat Him in a standard manner. Lord Caitanya, however, did not respond to standard treatment. The only way that He could be revived was by the loud chanting of the Hare Krsna mantra by His disciples, and since Sarvabhauma Bhattacarya had never before met Lord Caitanya, this fact was unknown to him.

Soon, however, some of the companions of Lord Caitanya came to know of the wonderful events that had transpired in the temple of Jagannatha, and when they learned that Lord Caitanya had been taken to the home of Sarvabhauma Bhattacarya, they went there, and by their chanting of the Hare Krsna mantra, the Lord was immediately revived. Sarvabhauma Bhattacarya then requested that the Lord and His companions become his guests of honor.

At this point there was a hot discussion between Sarvabhauma Bhattacarya and his brother-in-law Gopinatha Acarya regarding the divinity of Lord Caitanya. The devotees of the Krsna consciousness movement accept that Lord Caitanya Mahaprabhu is not an ordinary human being but is the Supreme Personality of Godhead Krsna Himself in the disguised form of a devotee. This was the point of contention between Sarvabhauma Bhattacarya and Gopinatha Acarya. Gopinatha Acarya, who had met Lord Caitanya previously, wanted to convince his brother-in-law that this young sannyasi was actually the Supreme Lord Himself, whereas the Bhattacarya maintained that Lord Caitanya could not have been God but must certainly have seen a great devotee of the Lord. The two brothers-in-law did not, however, argue simply on the basis of sentiment. Each cited evidence from the revealed scriptures to support his point of view. There are many bogus imposters who claim to be God and who are acclaimed as God by their followers on the basis of their emotions, but no man can become God by popular vote. The genuine incarnations of God are described in revealed scriptures, and it was with reference to such scriptures that this discussion took place.

Sarvabhauma Bhattacarya, as the greatest logician of his day, was the professor of many sannyasis. He was an elderly gentleman, about the age of Lord Caitanya’s father, and so he felt some paternal affection for Lord Caitanya. He was also greatly struck by the personal beauty of the Lord, and he thought that it would be very difficult for such a beautiful young man to follow the strict rules and regulations of the renounced order of life. He therefore desired that Lord Caitanya hear from him the teachings of the Vedanta-sutras, the elevated philosophical codes which summarize the essential spiritual truths of all the Vedic literatures. Lord Caitanya tacitly agreed to this proposal.

In the holy temple of Lord Jagannatha, Sarvabhauma Bhattacarya instructed Lord Caitanya continuously for seven consecutive days. For seven days Lord Caitanya listened with full attention, never speaking even a word, and so on the eighth day the Bhattacarya exclaimed, “Krsna Caitanya! I don’t think You understand what I’ve been saying. I’ve been instructing You for the past week, but You haven’t asked any questions or said anything about my explanations.”

To this Lord Caitanya replied, “Yes. I am a great fool. But since you asked Me to hear you, I’ve been trying to hear you as a matter of duty, although I cannot follow what you have been saying.”

Lord Caitanya replied that no interpretation was needed in order to understand the Vedanta philosophy. “The Vedanta-sutras are as bright and clear as the sun,” He said “But if someone tries to interpret them by mental speculation and give his own meaning, he covers this sun with the cloud of his imagination.” He stated that since the sutras were already perfect, there was no need to adjust the meaning. This is the standard way of accepting Vedic literature. The scriptures themselves are considered to be perfect, and the scriptural statements are accepted as perfect evidence. For example, it is stated in the Vedas that if one touches the stool of any animal, he becomes contaminated and has to take a bath. But elsewhere in the Vedic literature it is stated that cow dung is purifying. It can even purify a contaminated place. This appears to be contradictory, but the followers of the Vedas accept this statement as fact, and by doing so they do not make a mistake; actually, cow dung has all antiseptic properties, and this has been verified by modern chemical analysis.

Lord Caitanya stated that there are two ways to accept the Vedic literature—the direct method and the indirect method. The direct method is to accept the Vedic literatures as factual and accept their statements as authoritative and true. The other method is to interpret what is stated in the scriptures. This indirect method was condemned by Lord Caitanya Mahaprabhu as worthless and misleading. There is no need to interpret what is already clear. The indirect method is adopted by those who have independent theories of no actual value in order to lend respectability to their ideas. They do not have the courage to present their theories on their own merit, so they resort to the unscrupulous method of trying to show that these concocted ideas are authorized by the Vedas. Lord Caitanya condemned this.

Lord Caitanya said that the Vedic wisdom has to be understood as it is. Then the meaning can be very simply and clearly understood. The mental speculators generally try to show that the supreme truth is impersonal or void, but in His explanations to Sarvabhauma Bhattacarya, Lord Caitanya completely defeated these ideas. He explained all the sutras in a clear and simple way, and with extensive quotations from the Vedic literature He conclusively proved that in all the Vedic literatures the supreme truth is held to be Krsna, the Supreme Personality of Godhead. It is Krsna in His personal form who is the Absolute Truth, the cause of all causes.

The effectiveness of Lord Caitanya’s explanation is described by Srila Bhaktivinoda Thakura, the spiritual great-grandfather of the Krsna consciousness movement, in his classic book Caitanya Mahaprabhu—His Life and Precepts: “The keen understanding of Sarvabhauma saw the truth, beauty and harmony of arguments in the explanations given by Caitanya and obliged him to utter that it was the first time that he had found one who could explain the sutras in such a simple manner. He admitted that the commentaries of Sankara [the head of the impersonalist school] never gave such natural explanations of the Vedanta-sutras as he had obtained from Mahaprabhu.” Sarvabhauma Bhattacarya was so overwhelmed by Lord Caitanya’s explanations that he could not even speak; he simply looked at Him with awe and wonder. To encourage him, Lord Caitanya said, “My dear Bhattacarya, there is nothing wonderful in My explanations. Please take it from Me that devotional service unto the Personality of Godhead is the highest goal of human life.” He then quoted a famous verse called the atmarama verse to prove this point. 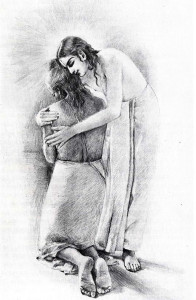 It is said that Sarvabhauma Bhattacarya then spontaneously composed one hundred verses in praise of the activities of Lord Caitanya. These very important verses are so perfect that even the poetry of Brhaspati, the spiritual master of the demigods, cannot compare to them. Of the verses of Sarvabhauma Bhattacarya, two are the most important, for they explain the essence of the mission of Lord Caitanya in appearing on this earth

(1) Let me surrender unto the Personality of Godhead who has appeared now as Lord Sri Caitanya Mahaprabhu. He is the ocean of all mercy and has come down to teach us material detachment, learning and devotional service to Himself.

(2) Since pure devotional service unto the Personality of Godhead has been lost in the oblivion of time, the Lord has appeared to renovate the principles, and therefore I offer my obeisances unto His lotus feet.

In the words of our spiritual master, “These two important verses are taken by the devotees of the Lord in disciplic succession as the most important jewels, and Sarvabhauma Bhattacarya has become highest amongst the devotees because of these famous verses.”

Lord Caitanya Mahaprabhu appreciated these verses so much that He embraced Sarvabhauma Bhattacarya, who at once became filled with even greater ecstasy. His ecstasy became so great that he practically became unconscious, and he was sometimes crying, sometimes dancing, sometimes trembling, and sometimes singing. Thus he fell at the lotus feet of Lord Caitanya.

In this way Sarvabhauma Bhattacarya, the great logician and grammarian, became a great devotee of the Lord, and as news of this spread, people came in hundreds to surrender to the lotus feet of Lord Caitanya Mahaprabhu. Gopinatha Acarya was especially pleased, and he expressed his gratefulness before Lord Caitanya. “My dear Lord,” he submitted, “it is only by Your mercy that such a stonelike person has become a great devotee.” Lord Caitanya, however, attributed the transformation to the mercy of Gopinatha Acarya. He stated that because Gopinatha Acarya had sincerely desired that his brother-in-law become a devotee, the Lord had fulfilled his desire. In other words, a devotee is more merciful than the Lord Himself because it is only by the mercy of a pure devotee that the Lord agrees to bestow the supreme gift of devotional service. Therefore, the first step in spiritual life is to take shelter of a genuine spiritual master who is a pure devotee. By the mercy of a devotee, a stonelike man can become a flowerlike devotee of the Lord.