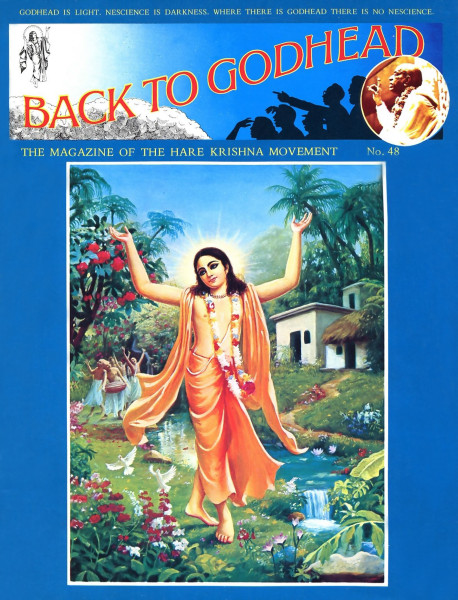 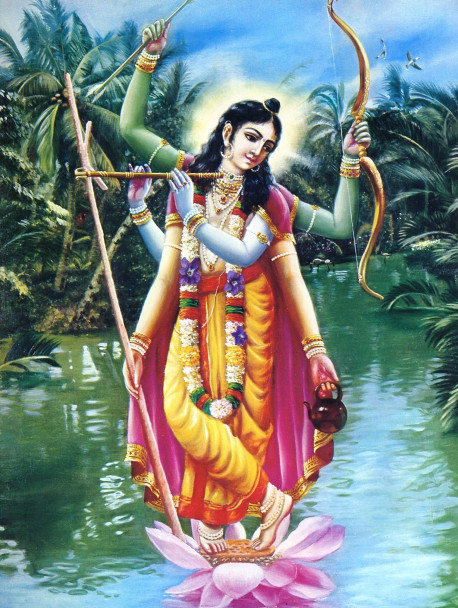 SADBHUJA-MUTI
This transcendental form was manifested before Sarvabhauma Bhattacarya by Lord Caitanya Mahaprabhu to reveal His identity as the Supreme Personality of Godhead. Although Godhead is one, He has innumerable forms. As a jewel may at different times appear to be of various colors, so the Lord appears at different times with different features and performs His varieties of pastimes. For example, in a previous age the Lord appeared as Lord Ramacandra. At that time His complexion was greenish, and He performed pastimes as a perfect king and warrior. Similarly, Krsna Himself appeared 5000 years ago in His original form, with bluish complexion, and enlivened His devotees by playing His flute. By exhibiting the form of sadbhuja-muti, Lord Caitanya revealed that He was the same Supreme Lord who had previously appeared as Lord Ramacandra and Lord Krsna. 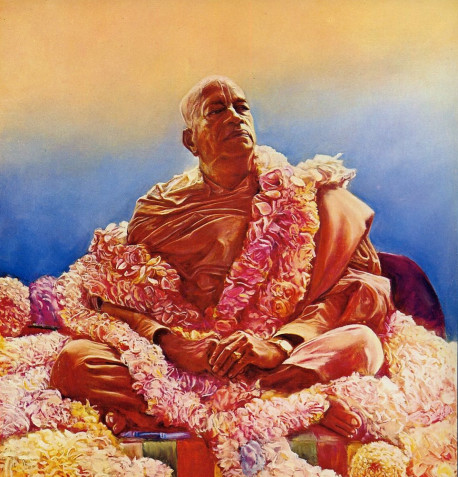 The Krsna consciousness movement is now being increasingly recognized throughout the world as a spiritual force of great potency, purity and importance to human society. With the simultaneous publication of the first two cantos of Srimad-Bhagavatam and the complete 1,000-page edition of Bhagavad-gita As It Is, the public is becoming increasingly aware that the boys and girls whom they see chanting and dancing on their city streets are students of a most serious discipline of God consciousness which is established on the basis of a philosophical system of considerable completeness, consistency and depth.

The chanting of the Hare Krsna mantra—Hare Krsna, Hare Krsna, Krsna Krsna, Hare Hare/ Hare Rama, Hare Rama, Rama Rama, Hare Hare—is the sublime method for this age for the attainment of God consciousness, and its effectiveness is practically demonstrated by the joyfulness, sincerity and pure character of its adherents. These are manifestations of genuine God consciousness. As stated in the Vedic scriptures, “When one is factually engaged in the service of the Supreme Lord, he automatically develops all Godly qualities.”

Krsna is a name of God, and “Krsna consciousness” means, simply, consciousness of God in His supreme eternal form. The particular distinction of the Krsna consciousness movement is that it is presenting authoritative knowledge about God in a scientific manner unparallelled by any religious, cultural or philosophical system in world. Furthermore, due to this scientific background, the Krsna consciousness movement is able to present a simple and universally appropriate process for the attainment of God consciousness that can be practiced by anyone and everyone, regardless of his race, religion, nationality or social position. This process is called bhakti-yoga, and it may be adopted without the need for one to renounce the activities and responsibilities of his daily life. One must simply learn the science of how, while performing one’s activities, he can remain constantly absorbed in God consciousness. It is this science that is explained by the ancient Vedic scriptures and that is now being introduced in a practical manner by the International Society for Krsna Consciousness on a global scale.

Historically, the background of the Krsna consciousness movement can be traced back 5,000 years to the time when Lord Sri Krsna, the Supreme Personality of Godhead, appeared on earth and explained to His personal friend Arjuna the philosophy of Bhagavad-gita. The practical application of the philosophical ideas of Bhagavad-gita was later clarified and simplified, 500 years ago, by Lord Sri Caitanya Mahaprabhu, who is pictured on the front cover of this month’s Back to Godhead. Lord Caitanya is understood from Vedic scriptural evidence to be an incarnation of God Himself who appeared on earth to teach the people of the modern age of quarrel and hypocrisy how to develop love of God. This Lord Caitanya did by introducing the sankirtana movement, or the congregational chanting of the holy name of God.

His Divine Grace A.C. Bhaktivedanta Swami Prabhupada is the world teacher of the philosophy of Krsna consciousness as originally expounded by Lord Sri Krsna and propagated by Lord Caitanya Mahaprabhu. Speaking from the most elevated platform of complete God consciousness, Srila Prabhupada is offering us a simple, sure and direct method by which we can revive our dormant loving relationship with the Supreme Lord and thus attain perfection in this lifetime. It is this perfectional process that is described in the pages of Back to Godhead. 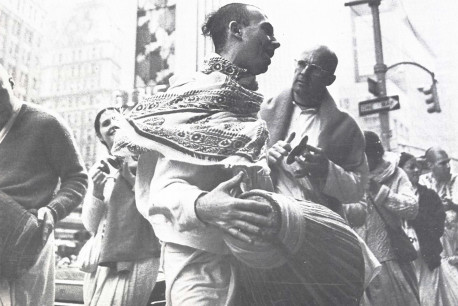