Back to Godhead > Devotees > Preaching > Not this Body > Liquid Beauty

Why is the attraction between male and female so powerful?
What is the essence of this attraction?
And why does the Vedic literature call it illusion?

A lecture given in Montreal in 1968
by His Divine Grace
A.C. Bhaktivedanta Swami Prabhupada
Founder-Acarya of the International Society for Krishna Consciousness 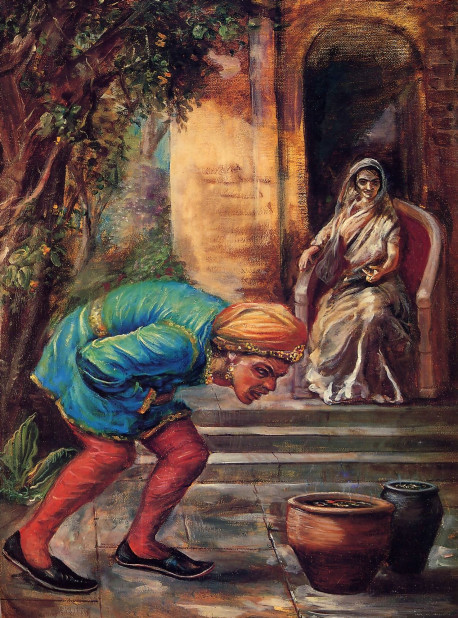 “Everything animate and inanimate within the universe is controlled and owned by the Lord. One should therefore accept only those things necessary for himself, which are set aside as his quota, and one should not accept other things, knowing well to whom they belong.” (Isopanisad, 1)

Everything belongs to Krsna. That is the verdict of the Isopanisad. For example, this land of America is now divided, but to whom did it originally belong? It belonged to Krsna. You have come here and divided Krsna’s property and declared, “This is Canada, this is the United States, this is South America.” In this way you are claiming proprietorship. But are you really the proprietor? No. You have encroached upon another’s property, so you are all thieves.

Actually, this is the position of anyone who claims to own something in this material world. This is illusion: janasya moho ‘yam aham mameti. Aham mameti means “I and mine.” In other words, when one thinks, “This body is me, and everything in relationship to this body is mine,” he is a thief and he is in illusion.

Now, what does one consider “mine”? His wife, his children, his home, his country. Why? Because he has a bodily relationship with these things. The original illusion is to think, “I am this body,” and then all these illusory, false relationships develop.

To get out of this illusion, we must be trained in how to counteract sex attraction. That is why from a young age, brahmacarya [celibacy] training is given so that one can know that a woman’s body is not actually attractive. What is attractive about it? It is simply made of flesh and blood. Similarly, if a woman analyzes a man’s body, what is there to be attracted to? Flesh and blood? Is flesh and blood very attractive?

In this connection there is a nice story about how one young girl kept her beauty in a pot. Once there was a very beautiful girl, and a rich boy was after her. The girl was married, but she was not very rich. So the boy was always proposing to her that they enjoy sex life, and she became perplexed: “He’s a rich man. If I don’t agree, he may do some harm to my husband or to me.” So she made a plan. The next time the boy approached her she said, “All right, I agree to your proposal. You come to my house in one week and I’ll engage with you.” Oh, he was very excited.

In the meantime the girl took some strong emetics and purgatives, and for seven days she simply purged out all her beauty by vomiting and passing stool. Then she kept those vomits and stools in two pots. Now, if you pass stool for even one day your features become ugly. And she passed stool and vomit for seven days, so naturally she became very ugly.

When the boy came to her, she was sitting at the door. He asked, “Where is that beautiful girl who was living here?”

“Why have you become so ugly?”

“Because I have extracted my beauty.”

“In these two pots. Just see. If you like, you can now enjoy my beauty.”

Actually, if we dissect our body we will find stool, urine, intestines, brains, muscles, blood, and so on. But because that stool, urine, muscle, brains, and intestines are so nicely decorated, the body can attract you. This is maya.

This business is going on all over the world. In this country I see that the girls are attracting the boys by their features in so many ways. And similarly the boys are attracting the girls by so many features—especially by nice motorcars. And as soon as a boy and girl are actually attracted and joined together in sex, the illusion becomes doubly knotted (tayor mitho hrdaya-granthim ahuh. The word hrdaya-granthim means “the tight knot of attraction within the heart.”

So, when the knot of material attraction becomes tightened through sex, the boy and girl want a house (grha) and some land (ksetra). Of course, nowadays everyone is seeking employment, but formerly there was no industry, no big business, and so everyone had to produce his own foodstuffs out of the field (ksetra). If you become a family man, you must have some source of income, and the original source of income is the land. If you can utilize the land, then all your necessities will be provided. As I mentioned before, this American land was lying vacant, but after the Europeans took possession of it they exploited its resources. So, everything was originally in the land.

Now, after acquiring some land or some employment, one naturally wants children (suta). As soon as a boy and girl are married, they generally desire to have a child. At least the girl wants one, although now the process is different. But girls generally want a child. That is natural. Then comes apta, relatives, and finally vittaih, wealth. One needs some bank balance.

People have forgotten their real interest and are absorbed in satisfying their superficial interests. But if you simply wash your shirt and coat and do not feed your body, how long can you exist? My Guru Maharaja [Srila Bhaktisiddhanta Sarasvati Thakura] used to give a similar example: A man was drowning, and another man came to save him. So the second man jumped into the water, but when he came out he brought only the drowning man’s shirt and coat. Yet the second man thought, “Now I have saved him.”

The mistake of modern civilization is that people are simply concerned with the “shirt and coat”—the body. There are many hospitals to cure bodily diseases, but there is no hospital to cure the disease of the soul. This Krsna consciousness movement is for curing the disease of the soul. Every soul, every person, is mistakenly accepting his body or his mind as his self. But the Srimad-Bhagavatam says, yasyatma-buddhih kunape tri-dhatuke . . . sa eva gokharah: “Anyone who accepts his body as his self is like an ass or a cow.” The bodily concept of life is therefore a gross misconception.

In the beginning of the Bhagavad-gita, Arjuna identified himself with his body. He was thinking, “This person is my grandfather, this one is my spiritual master, this one is my nephew,” and so on. So Arjuna was unwilling to fight against them. He was perplexed about his duty. And when he was unable to find a solution to his problems, he surrendered to Krsna: sisyas te’ham sadhi mam tvam prapannam. “I surrender unto You as Your disciple. Please save me from this perplexity.” Then Krsna immediately chided him. The spiritual master has the right to chide his disciple, so because Arjuna accepted Krsna as his spiritual master, the Lord immediately chided him: asocyan anvasocas tvam prajna-vadams ca bhasase. “My dear Arjuna, you are talking just like a very learned man, but you are fool number one.” Of course, Krsna did not directly say “fool number one,” but He said that no learned man speaks as Arjuna was speaking.

Before Arjuna accepted Krsna as his spiritual master, Arjuna was saying, “If I kill my family members, the women will become polluted and there will be unwanted children. And as soon as this world is full of unwanted children, it will be hell.” This is a fact. The world has now become a hell due to unwanted children.

Arjuna was speaking just like an ordinary gentleman, but when Krsna took up His role as Arjuna’s spiritual master, the Lord said, “Arjuna, you are hovering on the material plane. That is not very learned. The wise man understands everything from the spiritual platform. He doesn’t lament over the body, whether living or dead.”

So the body is not very important; the spirit is important. But nobody is discussing spirit. All the educational centers and universities are busy studying chemistry, physics, biology, mathematics, and at most a little philosophy. But this philosophy is simply mental speculation. Somebody gives some theory, and another philosopher gives some conflicting theory, but nobody is discussing the eternal spirit soul. That is the defect of the modern civilization.

It is a very hard task for us to convince people about these facts. But they are true whether people accept them or not. It is simply their misfortune if they do not accept. The fact is that, as Lord Krsna says, mamaivamso jiva-loke jiva-bhutah: All living entities are part and parcel of Krsna. Then what is our duty? Consider this example: The hand is part and parcel of the body, and so the duty of the hand is to serve the whole body. That’s all. The hand has no other duty. It cannot eat on its own account; it cannot do anything on its own account. When the hand takes direction from the whole, from me, then it works very nicely. In the same way, my leg and tongue and all other organs are servants of the body as a whole.

Similarly, as Caitanya Mahaprabhu* [*Caitanya Mahaprabhu is Krsna Himself in the role of His own devotee. He appeared in India five hundred years ago to teach love of God through the chanting of the Hare Krsna mantra.] says, jivera svarupa haya krsnera nitya-dasa: “Every living entity is the eternal servant of Krsna.” Krsna is the supreme controller, so it is the duty of everyone to serve Him. That is natural. Any other position is diseased. In other words, whoever is not acting in Krsna consciousness is diseased.

The treatment for this diseased condition is chanting Hare Krsna, Hare Krsna, Krsna Krsna, Hare Hare/ Hare Rama, Hare Rama, Rama Rama, Hare Hare. This chanting will cure the material disease just as a certain material mantra can cure a man bitten by a serpent. I do not know whether you have seen this, but in India there are experts who, simply by chanting a mantra, can revive the consciousness of a man bitten by a serpent. Similarly, we have been bitten by the serpent of maya, illusion, and the Hare Krsna mantra will restore our consciousness to its natural state—Krsna consciousness.

One Response to Liquid Beauty