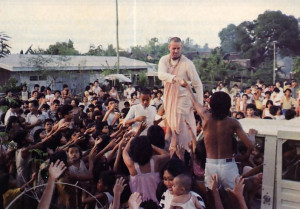 ISKCON’s regional secretary Mahasrnga Goswami on the food relief truck in the Philippines.

Cebu City, Philippines—When Typhoon Nitang devastated the Philippines in September, killing 1,500 people by a tidal wave, devotees from the local Hare Krsna Food for Life program were immediately on hand here and in Mandaue, two of the worst afflicted cities, distributing nutritious prasadam—food offered to Krsna.

The 109-mile-per-hour winds caused extensive destruction—sinking twenty ships, smashing buildings, and uprooting trees. The high winds blew the roofs off the buildings at the ISKCON community, and the devotees had to endure without electricity for a week and a half.

“As soon as the weather calmed down, we went to the market and purchased sacks of wheat flour, rice, and mung beans,” said ISKCON’s regional secretary Maha-srnga Goswami. “We worked around the clock making veggie burgers, and everyone was very appreciative.”

Dr. Larry Shinn, a prominent friend of ISKCON and Danforth Professor of Religion at Oberlin College in Ohio, was invited by the show’s producers to speak on behalf of ISKCON.

Mr. Belil accused the devotees of using “brain control” and of misusing funds collected for the Hare Krsna movement in Spain. Dr. Shinn replied that he had studied sixteen ISKCON temples in the U.S. and India and saw no evidence of either coercion or misuse of funds. Dr. Shinn stressed that the devotees follow an ancient religious tradition, one that is also currently followed by many Indians.

Sucisrava pointed out that at the devotee’s request the Spanish government had inspected the ISKCON accounts and had found nothing abnormal. “Everything we collect,” Sucisrava explained, “is through distributing literature that tells about religious and spiritual principles that can benefit any person.”

Also supporting ISKCON was the chairman of the Office of Religious Affairs in the Spanish Ministry of Justice and a representative for the Jehovah’s Witnesses in Spain.

La Clave, the longest-running show in Spanish TV history, is hosted by Jose Luis Balbin, whose reputation for integrity compares to Walter Conkrite’s in the U.S. Said Kesava Bharati Goswami, ISKCON’s regional secretary for Portugal and Spain. “Of all the shows on television, this is the one that the intellectuals watch. This will have a very positive effect on ISKCON’s position in Europe.” 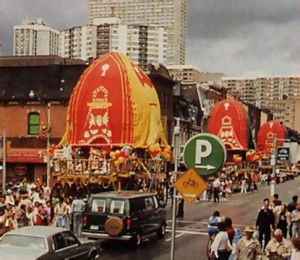 Toronto, Ontario—This city’s tenth annual Ratha-yatra parade took place on Yonge Street, Canada’s busiest thoroughfare (and at 1,783 miles long, the world’s longest street). Half a million people enjoying the Tall Ships Festival also watched the devotees and other participants in the parade pull three forty-foot-high chariots to the waterfront on Lake Ontario. The parade was led by a decorated elephant, and a plane flew over the city for six hours trailing the message “Krishna Blesses Toronto. Hare Krishna.”

At the festival site, one of ISKCON’s present spiritual masters and the director of its affairs in Canada and western India, Srila Gopala-Krsna Goswami Bhagavatapada, hosted Toronto alderman Ying Hope and Indian consul general Surinder Lal Malik, the guest speakers.

Five thousand pieces of transcendental literature were given out, and the festival goers enjoyed colorful exhibits, devotional music, and a vegetarian feast.