The Queen, the Duke, and the
Prime Minister and an encounter
with “the all-attractive one.”

by Mukunda dasa and Ken Shouler 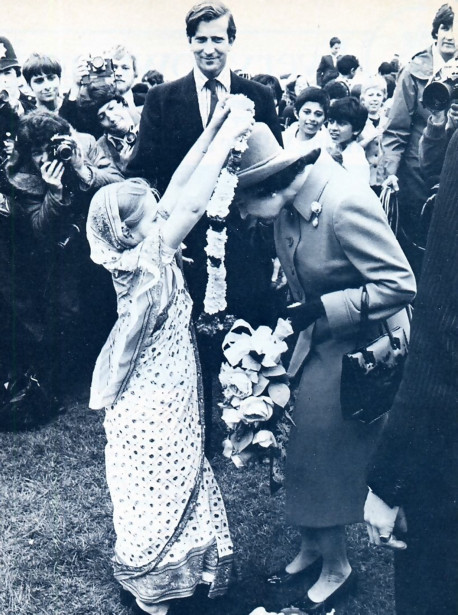 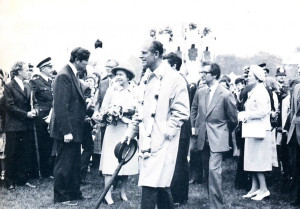 The royal couple, the Queen and the Duke of Edinburgh. seem pleased with the touch of garlands that first touched Lord Krsna. The Duke received his garland from Varsha Patel. the daughter of one of the Hare Krsna movement’s many life members in London.

Krsna’s devotees well know that He is. His name says, “the all-attractive one.” It is the uninitiated who are generally slow in acknowledging this fact. Buy recently in London’s Hyde Park a distinguished group of uninitiates were reawakened yo Krsna’s universal beauty. There, during a celebration of the united Nations’ International Year of the Child. Queen Elizabeth II and the Duke of Edinburgh humbly received garlands from two eight-year-old Hare Krsna devotees Varsha Patel and Bhaktimati dasi, of London’s Bhaktivedanta Manor. (The Manor is the largest center for Indian culture in Great Britain.)

“Hare Krsna,” said Bhaktimati, greeting the Queen and the Duke with palms pressed together in the traditional pranama gesture.

“What did you say?” the Queen asked. “Hare Krsna,” Bhaktimati answered, nodding respectfully. 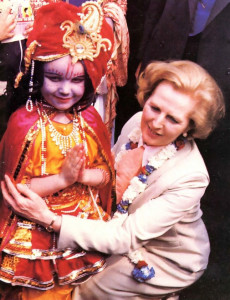 Prime Minister Margaret Thatcher enjoys a few moments with Krsna (portrayed by six-year-old Yamuna dasi). “Why are you blue’?” the Prime Minister asked

The Queen gave a gracious smile and bowed slightly to help the garland over the brim of her hat. Then Varsha offered a garland to the Duke.

Later, six-year-old Yamuna dasi presented a garland to Prime Minister Margaret Thatcher. Yamuna was attired as Lord Krsna, complete with bluish hue, peacock feather, glistening silk dhoti, and necklaces and bangles. The Prime Minister caught sight of Yamuna at a distance and walked directly up to her with hands folded in a gracious exchange of pranamas.

“Who are you?” the Prime Minister asked Yamuna.

“Then why are you blue’?” “Because Krsna is blue.”

The Prime Minister smiled and kindly accepted Lord Krsna’s garland. Then she gave Yamuna a big hug. (The next day the two were pictured together in the Sun, Britain’s largest daily newspaper.)