Back to Godhead > ~Featured~ > The Chariots Roll Again

“This Other Kind Of Festival”

In all the world, the Festival of the Chariots has had the longest run … several thousand years and getting more popular all the time. 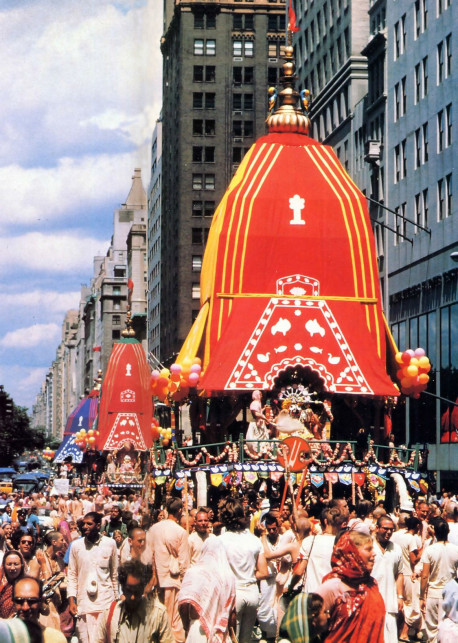 JAGAJIVANA DASA came to the Krsna consciousness movement in 1970. Before that he was a reviewer for Down Beat magazine.

A moving experience, in many ways. Festival-goers in Sydney, Australia.

About ten years ago, my work was reporting on the usual kind of festival, the kind that generally comes to mind when you hear the word.

Altamont, the West Coast version of Woodstock, pretty well tells the story. It was amazing how many hundreds of thousands of us came out for that festival, and how desperately we wanted to have a celebration. Yet from the start it was clear we were going to have some big disagreements over what we were celebrating. Up on stage, musicians and festival guards were punching one another out. And the moment the star of the festival got down from his helicopter and started making his way through the crowd to sing ‘Gimme Shelter;’ somebody reached out and gave him a fist in the face. We’d come there to celebrate and get ourselves together, and during that last set, one of us got himself knifed to death.

Sure, this was a somewhat special case, and yet it pretty much sums up that whole experience with festivals . . . big pilgrimages to watch somebody on stage act out the collective ego trip. 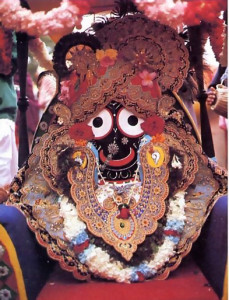 Krsna smiles appreciatively (in His Deity form as Jagannatha. the Lord of the Universe) and pulls everyone farthe and farther toward inner realization.

He was a god, and you were a god, and if anybody crossed anybody else, it was a war of the gods.

Then this other kind of festival came into my life, in Golden Gate Park during July of 1970. The one-two-three, one-two-three of the hand cymbals could have been coming from hi-hat or ride cymbals, and the oblong Indian drums had a long-drawn-out mooing sound that might have made ordinary trap drummers feel like throwing their tom-toms away. But mainly. for the first time in my experience, everybody seemed to be appreciating someone else (and not just some stand-in for themselves). The someone else was round-eyed, smiling Jagannatha: Krsna, the Lord of the Universe. And at last everybody was celebrating together. We had finally found one song we could all sing—and sing and sing, for hours. Blacks, whites, yellows. browns, kids, old folks, profs, cops—family unity at last. Hare Krsna, Hare Rama. The words stayed with you like no others. We were singing to the Lord of the Universe, an old, very special, long-forgotten friend of the family. 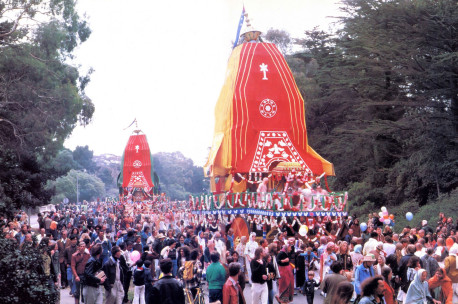 Get-together in Golden Gate Park. “Blacks, whites, yellows, browns, kids, old folks, profs, cops – family unity at last. Hare Krsna. Hare Rama. The words stayed with you like no others. We were singing to an old, very special, long forgotten friend of the family” 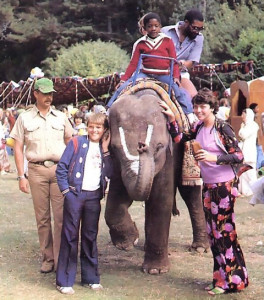 It was an experience that was really moving, in many ways. We grabbed the chariot ropes and pulled Krsna, and He pulled us along with Him. Krsna’s chariot rolled on and on, and the waves of chanting and feeling rolled in and in, deeper and deeper. Hare Krsna, Hare Krsna, Krsna Krsna, Hare Hare. Hare Ram a, Hare Rama, Rama Rama, Hare Hare. Two lines that held all the beauty imaginable. The more you chanted, the more you experienced it. There was actually someone named Krsna who somehow, some time ago, we let slip away. But now He was right here in His name, and smiling from His chariot, and everything was clearing and turning pure and lustrous and fresh. 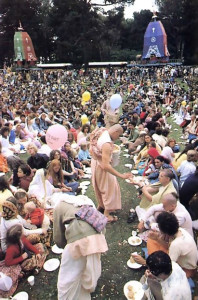 We kept moving along together, pulling Krsna’s chariot or playing drums or cymbals or clapping, and always chanting. Hare … knowingly or unknowingly, we were calling on Hara (Krsna’s eternal consort Radha) to help us back to the spiritual forest of Vrndavana, where everyone has pure devotion for Krsna. Krsna, the all-attractive one. Hare Krsna. We were calling on Hara to help us, here and now, back to our natural affection and devotion for the Supreme Personality of Godhead, the all-pleasureful one. Hare Rama. 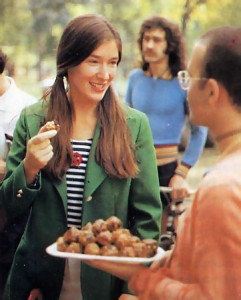 Krsna and His brother Balarama the mood five centuries ago. when They appeared in India as Lord Caitanya and Lord Nityananda (chanting Hare Krsna with arms upraised)

Then, too, there was the feast, all gratis. And you had to reflect. “When was the last time thousands and thousands of people feasted together’?” And what a feast it was. Spicy, tomatoey cauliflower-and-potato curry … puffy, buttery wheat patties … cold and creamy sweet rice … whipped lemon-and-yogurt drink … Anyone who asked the devotees about the recipes would invariably hear, “… and the most important ingredient is that you offer everything to Krsna:”

It seemed a lot of people, including some noted musicians who were there, were taking the idea to heart. Chanting Hare Krsna, playing music and staging dramas for Krsna, offering delicious vegetarian dishes to Krsna and feasting. The fool-proof formula for an instant festival, anywhere and everywhere. When we make things happen for Krsna on that kind of grand scale, then we’ve really got something to celebrate.