A New Hare Krishna Farm in the Rockies

A New Farming Village in the Rockies 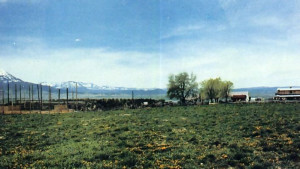 Part of the agricultural terrain is a ninety-acre tract of alfalfa. New Varsana also has abundant wooded areas, along with two streams and five pounds

Recently, Hare Krsna devotees from Denver started ISKCON’s fifteenth farm community, a 340-acre spread atop Sunshine Mesa and overlooking the Peonia-Hotchkiss fruit valley, on the western slope of the Colorado Rockies. The community is called New Varsana, after the birthplace of Lord Krsna’s eternal consort, Srimati Radharani, in Vrndavana, India.

Fourteen devotees, including two married couples and four young children, are hard at work transforming the site into a Krsna conscious farm community. They will establish a gurukula, or spiritual primary and secondary school, as soon as possible.

This past January Prana-vallabha dasa, coordinator of the project, decided to provide financial support by starting a company called Govinda’s Goodies. In their Denver kitchens devotees make “Bliss Bars;” a candy that is both wholesome and holy (the devotees offer all the bars to Lord Krsna). As of June 1, Denver’s natural food stores had sold some sixty thousand Bliss Bars, and the devotees are planning to produce from eighty to one hundred thousand per month. Eventually Govinda’s Goodies will move to New Varsana. Most of the ingredients for Bliss Bars will come from the farm. 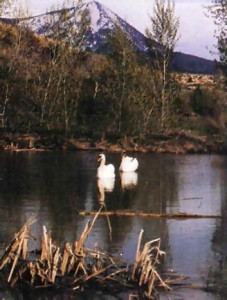 The devotees have stocked the ponds with geese, ducks. and swans

New Varsana has both wooded and agricultural terrain (including a ninety acre tract planted with alfalfa), along with two streams and five ponds, part of an irrigation system fed by the local reservoir. So far, the devotees have cultivated a two acre vegetable garden, and they have stocked the ponds with geese, ducks, and swans. A number of peacocks are strutting around the barnyard, and a flock of twenty doves is feeling quite at home. A cow and its calf arrived with Nirguna dasa. a devotee from San Diego who now oversees the farm’s agriculture and livestock. The devotees plan to have a full herd of cows and to grow all sorts of grain, fruit, and vegetables.

The first new building the devotees propose to build is an all-purpose structure that will include residential quarters, offices, guest rooms, and a temple. The basement will have a giant kitchen, to accommodate the anticipated growth of both the New Varsana community and Govinda’s Goodies.

On a visit to New Varsdna in early May. His Divine Grace Srila Ramesvara Swami (director and spiritual guide for the Hare Krsna centers in Colorado, Utah, Nevada. Hawaii, and southern California) said he wants the community to stick to the simple yet sublime farming-and-village life of ancient India’s Vedic civilization.

2 Responses to A New Hare Krishna Farm in the Rockies