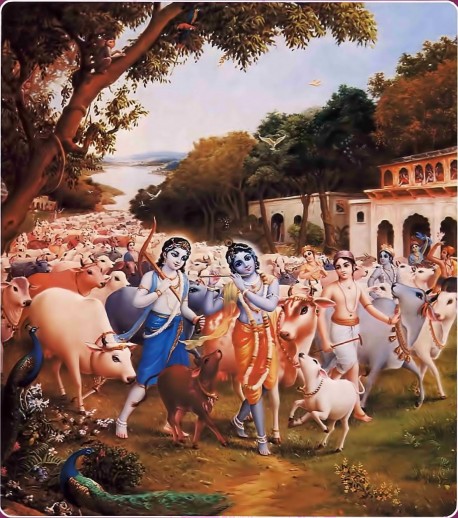 Krishna was very pleased with the atmosphere of the Vrndavana forest, where flowers bloomed and bees and drones hummed jubilantly. While the birds, trees, and branches were all looking very happy, Krishna, tending the cows and accompanied by Sri Balarama and the cowherd boys, began to vibrate His transcendental flute. When the cowherd girls of Vrndavana heard the sweet vibration, they began to talk among themselves about how nicely Krishna was playing His flute. They also described how Krishna dressed, decorated with a peacock feather on His head (just like a dancing actor) and with blue flowers pushed over His ear. His garment glowed yellow-gold, and He wore a vaijayanti garland around His neck. Dressed in such an attractive way, Krishna filled up the holes of His flute with the nectar emanating from His lips. So the cowherd girls remembered Him entering the Vrndavana forest, which is always glorified by the footprints of Krishna and His companions.

One of the reasons why Lord Krishna appeared five thousand years ago was to give us subject matter for meditation. This description of Krishna entering the forest of Vrndavana is taken from Krishna, the Supreme Personality of Godhead, by His Divine Grace A.C. Bhaktivedanta Swami Prabhupada.