Back to Godhead > ISKCON > News > ISKCON News: ISKCON at the United Nations

This June, in Vancouver, Canada, 4,500 delegates from 135 countries met in an atmosphere of emergency. Their goal: to improve human living conditions worldwide. This gathering, called the United Nations Conference on Human Settlements—”Habitat,” for short—included both governmental meetings and (for the first time in UN history) a meeting of authorized nongovernmental organizations (“NGO’s”).

ISKCON representatives, including Gurudasa Svami, Revatinandana Svami, and Dharmadhyaksa dasa, addressed many assemblies and seminars during the two weeks of NGO meetings. ISKCON’s outdoor tent-exhibit, entitled “Simple Living, High Thinking,” drew rousing applause from thousands of visitors. According to the New York Times, most countries wanted to “free themselves from Western ideas on planning and from dependence on Western technology.” As a result, considerable praise went to ISKCON’s plans for a model city in Mayapura, India (based on both classical Vedic town planning and the latest natural technology, such as windmill power units and methane gas converters).

Besides Indian delegates who pledged their support, Ronald Seigal, head of the International Assistance Division of the Department of Housing and Urban Development, invited the devotees to Washington for further discussions on the Mayapura project.

How did the ancients live, and what could they teach us about living? With so much interest today in the cultural riches of “lost” civilizations. Doctor Thomas J. Maloney, Professor of Anthropology at Southern Illinois University, has this to say about Srimad-Bhagavatam, translation and commentary by His Divine Grace A.C. Bhaktivedanta Swami Prabhupada:

“As a text to be studied by anthropology students, this work has some very attractive points. It is always difficult to see things from the cultural viewpoint of others, but this work makes this empathetic view much easier. The vivid illustrations add to the easy transference from one culture to the other…. The ‘working’ translation and the more poetic English version are, of course, invaluable, and the purports are of great value….”

(To order any or all of the volumes of Srimad-Bhagavatam, please use the coupon on last page.) 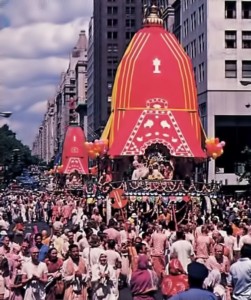 “In 1966, Srila Prabhupada, when you had just arrived here in New York from India, you would go alone to Tompkins Square Park and chant Hare Krishna. Now, ten years later, thousands of people have come here to Washington Square Park to hear you.” It was Sunday, July 18. Kirtanananda Svami, an early disciple of His Divine Grace A.C. Bhaktivedanta Swami Prabhupada, was speaking to his spiritual master at the climax of an event that Srila Prabhupada had made possible. “Actually,” Prabhupada explained, “it is Lord Krishna who has made this festival possible. He wants everyone, all over the world, to chant Hare Krishna and be happy.”

An estimated ninety thousand people saw the Festival of the Chariots (Ratha-yatra), a transcendental parade that moved down Fifth Avenue from Central Park to the West Village. Many helped pull the three mammoth chariots, with their bright red and yellow canopies and huge wooden wheels. Along with the chanting and dancing devotees there were young people, housewives, and businessmen—all taking part in this commemoration of Lord Krishna’s return journey to His beloved Vrndavana.

One business executive who watched the festivities from his office in the World Trade Center commented, “It looked like the most beautiful thing I’d ever seen.” At the park, everyone enjoyed Srila Prabhupada’s talk and a feast of Krishna-prasada, spiritual food.

All three major television networks and the New York Times and Daily News confirmed the festival’s success. Ratha-yatra celebrations in eleven other cities (including San Francisco, London, and Paris) met with similar response.