Back to Godhead > ISKCON > News > ISKCON News: Professor Eulogizes Bhagavad-gita As It Is

ISKCON News: Professor Eulogizes Bhagavad-gita As It Is

English Professor Eulogizes Bhagavad-gita As It Is

A.G. Medlicott, Jr., professor of English at the University of Connecticut, recently made this appraisal of Bhagavad-gita As It Is:

“Now, through the auspices of the Bhaktivedanta Book Trust of Los Angeles, students of the American Transcendentalist Period can benefit from a superbly translated and edited edition of the Bhagavad-gita. Concepts of the self, duty, personal attainment, and self-reliance—all facets of a world germane to Emerson and Thoreau and their contemporaries—now become clear in this rich edition. Chapter Four, entitled ‘Transcendental Knowledge,’ is particularly useful in drawing parallels between Emerson’s essays on transcendental thought and the concepts of Eastern thinkers.

“The publishers of this volume are to be complimented in making such a definitive book available to so many for such a nominal cost. For students of American literature, especially, having the Bhagavad-gita at hand will prove invaluable.” 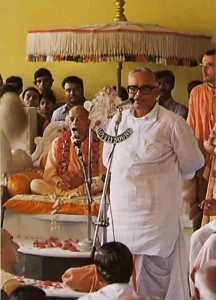 The center will offer daily seminars on the Vedic literatures, mainly the Bhagavad-gita and the Srimad-Bhagavatam. Also, at nearby colleges, factories, and business centers, the devotees will hold seminars on practical spiritual living.

Dixon, MO.—ISKCON’s new farm in the Ozarks (125 miles southwest of St. Louis) does more than look rustic. True, it includes thirty-five acres of rolling woodlands. At the same time it boasts forty acres of grazing land (for oxen and cows) and one hundred acres of cropland. In fact, the farm has a lot to do with the creamy milk products and luscious vegetable dishes served at the St. Louis center’s Sunday love feast. 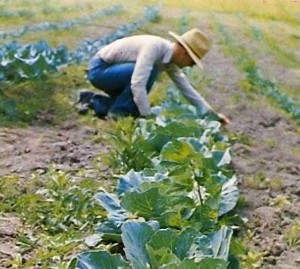 The farm’s combination of hardworking devotees and fertile soil keeps the St. Louis center brimming with cabbages, cucumbers, lettuce, peas, spinach, and squash, as well as cauliflowers, potatoes, and tomatoes (and more). And the soil promises to stay fertile. The Maries River feeds into a creek, four natural springs, and five ponds, so there’s water all around. Perhaps that explains the farm’s name—New Godruma, after a sacred Indian island.

Plans for the future include bee colonies, an orchard, a temple, more houses (built largely of rocks from the farm’s riverbeds), a greenhouse, and, naturally, plenty of milk and vegetables for the St. Louis center.