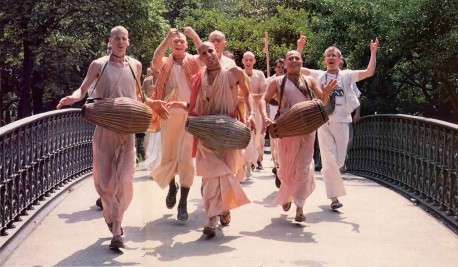 The International Society/or Krishna Consciousness (ISKCON) is a worldwide community of devotees practicing bhakti-yoga, the eternal science of loving service to God. The Society was founded in 1966 by His Divine Grace A.C. Bhaktivedanta Swami Prabhupada, a pure devotee of God representing an unbroken chain of spiritual masters originating with Lord Krishna Himself. The following eight principles are the basis of the Krishna consciousness movement.

The special design of the Hare Krishna chant makes it easy to repeat and pleasant to hear. Spoken or sung, by yourself or in a group. Hare Krishna invariably produces a joyful state of spiritual awareness—Krishna consciousness.