Back to Godhead > ISKCON > Temples > ISKCON in Hamburg, Germany 1969 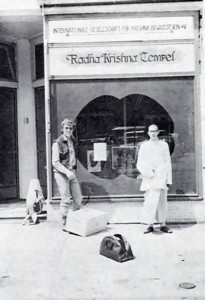 Shivananda das outside the display window with one of the friends of the temple before going out for Samkirtan.

Krishna Consciousness came to Hamburg in October, 1968. Two Americans and one native German formed the team for the first center in Central Europe. The Hamburg Krishna Consciousness center will especially occupy itself with the task of translating and publishing the great volume of Krishna Consciousness literature into the German language. The German branch of ISKCON Press was begun in April with the purchasing of a large offset press (now known as “Radha Press”), and since that time the staff has been built up to put out a regular monthly edition of Back to Godhead, which, translated into German, becomes ZURUCK ZUR GOTTHEIT. The first major work to be published by ISKCON Press will be BHAGAVAD GITA AS IT IS as published by Macmillan & Co. last year. The work for this began in August. 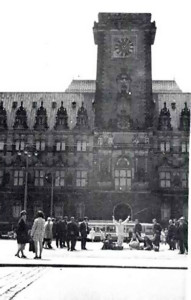 Kirtan is held in front of the “Rathaus”, an old building in Baroque style architecture which is still functioning as Hamburg’s City Hall.

Nord Deutsch Rundfunk, the major television station of Northern Germany, filmed Kirtan in Hamburg’s streets for a one-hour special program in October. The cameras also came into the temple to record the colorful festivities within. 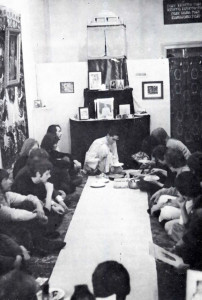 One Response to ISKCON in Hamburg, Germany 1969