Back to Godhead > ISKCON > Temples > In San Diego, California and around the world…

In San Diego, California and around the world… 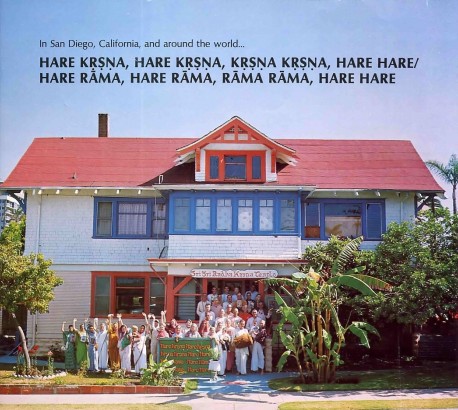 Nearing the end of its arduous journey from Calcutta to New York ten years ago, the cargo ship Jaladuta docked briefly in Boston. One of the few passengers on board was His Divine Grace A.C. Bhaktivedanta Swami Prabhupada, who at the age of sixty-nine was making his first journey outside of India. His mission, given him by his spiritual master, was to teach the science of Krishna consciousness to the people of the Western world. When he stepped off the boat, Srila Prabhupada noticed how materially inclined the people of the West were. He saw what a difficult task he would have, and he prayed to Lord Krishna for help. A year later, in a humble storefront in New York City, he founded the International Society for Krishna Consciousness (ISKCON) and began the movement that’s surprising the world with its remarkable growth and popularity.

Over the past nine years, Srila Prabhupada has established ISKCON centers (like the one above in San Diego) in over seventy major cities throughout the world. His message is simple and clear: “Chant Hare Krishna, and your life will be sublime.” The Hare Krishna mantra is a chant or prayer requesting the Supreme Lord to engage us in His service.

The disciples of Srila Prabhupada, who have taken his advice and experienced the pleasure of chanting Hare Krishna and serving the Lord, are naturally eager to express their gratitude to him. They’ll do this formally on August 31, his birthday anniversary, which is called Vyasa-puja. By a wonderful coincidence, Vyasa-puja falls on the day following Lord Krishna’s birthday celebration (Janmastami). Therefore both events are observed side by side with equal enthusiasm. You’ll find out more about the significance of these two days as you read through this issue of BACK TO GODHEAD.