Back to Godhead > ~Featured~ > Celebrating the Birth of Lord Krishna

Celebrating the Birth of Lord Krishna 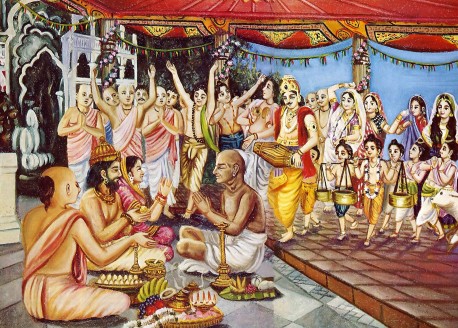 Five thousand years ago, Krishna, the Supreme Personality of Godhead, descended from the spiritual world and appeared in Vrndavana, India. Naturally an occasion of great joy for His devotees, His birthday, Janmastami, was celebrated with opulence and gaiety. The original Janmastami took place in Vrndavana at the house of Krishna’s foster father, Nanda Maharaja. Learned brahmanas and astrologers led the festivities, and all the town’s residents joined in the singing, dancing, and feasting. Each year since then Lord Krishna’s devotees have marked the auspicious event in the same way. Today, people from many nations, having heard about this wonderful day, take pleasure in celebrating Janmastami. The following pages depict last year’s festival at Bhaktivedanta Manor, near London, England. 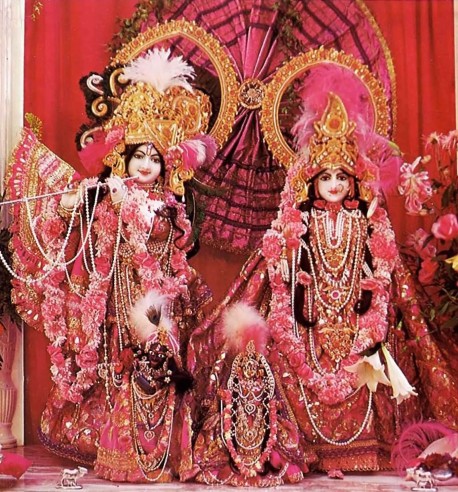 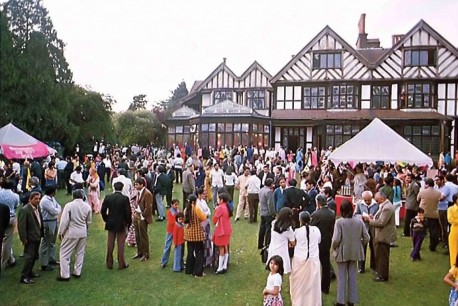 Friends of the Society from the London area gather at the estate for the Janmastami fair.

The Birth of Lord Krishna
An International Holiday
by Madhavananda dasa

Many Indian people who have left their homeland in search of material prosperity in the West have become estranged from their own culture. But when they see young Westerners taking to the essence of the Vedic tradition in the form of Krishna consciousness, they are moved to review their neglected heritage and revive their practice. Thus thousands of Indians regularly visit Krishna consciousness centers around the world. One of them, Bhaktivedanta Manor, is pictured here.

Bhaktivedanta Manor is a large estate in the countryside near London, England. Its bountiful gardens, orchards, pastureland and dairy accompany an exquisite temple graced by Deities of Lord Krishna and His eternal consort, Radharani. The formal name of the Deities, Sri Sri Radha-Gokulananda, honors Gokula, a farming village in India where Krishna lived thousands of years ago.

Drawn by these perennial attractions, busloads of Indian guests come to the Manor every Sunday. As they arrive, they bow down before the altar, offering prayers, fruits, grains and flowers. The Indian guests feel quite at home doing this, for as His Divine Grace A.C. Bhaktivedanta Swami Prabhupada has said, “Most Indian people are by nature Krishna conscious, but being attracted by the glare of material life in the West, they have forgotten their great culture and heritage.”

Of course, Indians are not alone in this regard. The cultural mainstream of all human civilization, East and West, is its spiritual heritage, and all contemporary societies are beset by forgetfulness of this fact. It is the aim of the International Society for Krishna Consciousness to remind us all, regardless of background, of our permanent relationship with the Supreme Personality of Godhead. Indians and native-born Britishers alike appreciate the transcendental qualities of a Sunday feast at the Manor. 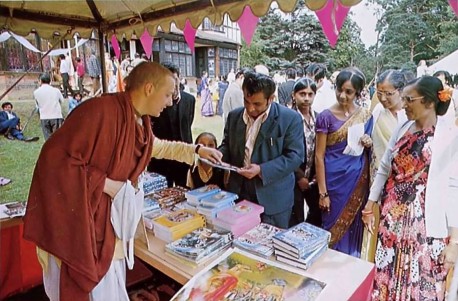 Indians are familiar with Vedic literature, but most haven’t heard the meaning clearly explained. They are eager to read the books of His Divine Grace A. C. Bhaktivedanta Swami Prabhupada to gain a better understanding.

Last August at Bhaktivedanta Manor, a celebration of the birthday, or appearance day, of Lord Krishna drew over five thousand people to the temple. That gathering is seen on these pages. Krishna’s appearance day, called Janmastami, is the most important holiday on the Vedic calendar. Expecting a crowd, the devotees erected a large tent on the front lawn. Inside the tent, festivities—plays, movies, slides, discourses and congregational chanting of the Lord’s holy names—continued through the day and evening until midnight. Then a magnificent ceremony called abhiseka was performed. The Deities were bathed in yogurt, milk, rose water, clarified butter and honey, with fifteen hundred guests staying to watch. At its conclusion, everyone enjoyed a sumptuous feast of food offered to Krishna. That evening, inspired by the transcendental mission of ISKCON, eleven guests enrolled in the society’s life membership program. 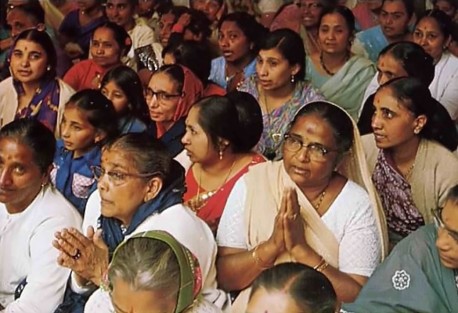 Chanting the lord’s holy names is the highlight of the program, and it continues for many hours. The beautiful sound awakens spiritual consciousness.

On many days that summer, the Deities were taken from Their altar, placed on a palanquin and carried through the local village of Letchmore Heath. Hundreds of participants followed, chanting Hare Krishna, Hare Krishna, Krishna Krishna, Hare Hare/Hare Rama, Hare Rama, Rama Rama, Hare Hare. And in November a throng of nine thousand came to the Manor to celebrate a favorite holiday, Govardhana-puja, which commemorates Krishna’s transcendental pastime of lifting Govardhana Hill. 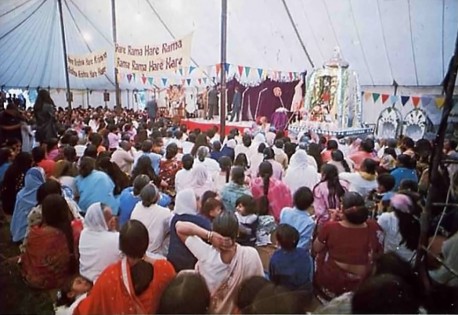 Devotees and guests crowd into the huge pavilion all afternoon and evening for the plays, dances and concerts. The Deities preside at the right of the stage.

On hearing about the marvelous programs at Bhaktivedanta Manor, Srila Prabhupada commented, “This movement of Lord Caitanya’s is so wonderful. There are so many festivals—Janmastami, Gaura-purnima, Govardhana-puja, Jhulana-yatra, Ratha-yatra, Rasa-lila. Practically speaking, there is a big festival every two months. So let there be many such wonderful programs, and let everyone come and see the blissful life of Krishna consciousness.” The devotees of the International Society for Krishna Consciousness extend this invitation to all readers of BACK TO GODHEAD. We hope you’ll join us at the ISKCON center nearest you for this month’s Janmastami celebration on August 30.

One Response to Celebrating the Birth of Lord Krishna