Back to Godhead > Devotees > Guru / Initiation > Delivering the Message Unchanged 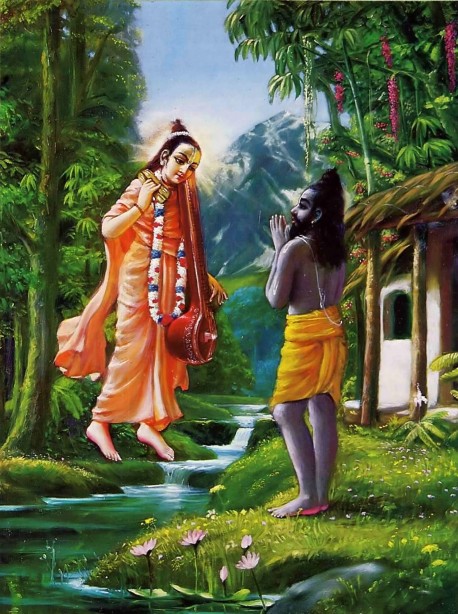 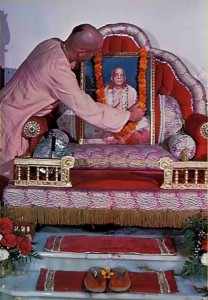 The day on which a disciple celebrates the appearance of his spiritual master is called Vyasa-puja. The word “Vyasa” indicates Srila Vyasadeva, a powerful incarnation of Krsna (God) who compiled all of the Vedic literature, and “puja” means worship.

Vyasadeva appeared five thousand years ago, at the dawn of the present Age of Quarrel, just when widespread moral deterioration was about to begin. He could foresee that the people of this age would be short-lived, unfortunate and always disturbed.

Before Vyasadeva, all the Vedic scriptures were taught and received verbally in disciplic succession. The memories of both the students and the spiritual masters of those ages were so sharp that once they heard a transcendental message from their spiritual master, the message was immediately imprinted into their brains and considered a written language.

To give the unfortunate people of the modern age a chance to partake of the knowledge contained in the Vedas, Sri Vyasadeva undertook the enormous task of compilation. He composed the millions of Sanskrit verses of the Mahabharata, the Vedanta-sutra and the Puranas, including Srimad-Bhagavatam. No one else in history can compare with him as a poet, philosopher or writer, and he is thus known as Mahamuni (the great sage). He is the spiritual master of all who follow the teachings of the Vedas. His final, mature work, Srimad-Bhagavatam, is known as the “ripened fruit of the Vedas” and is sufficient in itself for God realization. The precious Bhagavatam has been handed down in disciplic succession, from guru to disciple, in an unbroken chain, and today His Divine Grace A.C. Bhaktivedanta Swami Prabhupada, spiritual master of the International Society for Krishna Consciousness, is delivering it in turn to his disciples.

Out of his causeless mercy, Srila Vyasadeva wrote Srimad-Bhagavatam for the benefit of the fallen people of Kali-yuga (the modern age), and out of his causeless mercy Srila Prabhupada is personally translating and expanding this monumental work—and he is preaching it throughout the western world as well. At the advanced age of seventy, he traveled under great hardship from India to America to found the International Society for Krishna Consciousness, and today, nine years later, he tirelessly works eighteen to twenty hours a day, still translating and preaching the eternal message of Srimad-Bhagavatam: pure, unalloyed service to Krsna (God).

There are many so-called gurus, in India and elsewhere, who preach something other than pure devotional service to God. But such “Gurus” are condemned by Vyasadeva at the beginning of Srimad-Bhagavatam: “The supreme occupation for all humanity is that by which men can attain to loving devotional service unto the transcendent Lord. Such devotional service must be unmotivated and uninterrupted in order to completely satisfy the self.” (Bhag. 1.2.6) And they are condemned by Lord Krsna Himself in Bhagavad-gita: “Just give up all other forms of religion and surrender unto Me. I will protect you from all sinful reaction. Do not fear.” (Bg. 18.66) Those who are followers of the Absolute Truth, the source of all emanations, accept that all knowledge of the Absolute Truth is coming from the Vedic scriptures compiled by Vyasadeva, which include Srimad-Bhagavatam and Bhagavad-gita. The emphatic conclusion of these scriptures, which are the cream of the Vedas, is that Lord Krsna is the source of all incarnations and manifestations. And this conclusion has been reiterated by all the spiritual masters in disciplic succession, such as Lord Brahma, Narada, Vyasadeva and, in the modern age, Lord Caitanya, who stressed the chanting of the Hare Krsna mantra.

Therefore one who is an actual spiritual master, who is imparting genuine knowledge of the Absolute Truth, must preach the message of Vyasadeva without change. So on his appearance day, the disciples of His Divine Grace A.C. Bhaktivedanta Swami Prabhupada will worship him as a bona fide representative of Vyasadeva, who is faithfully preaching the pure message of Vyasadeva throughout the world.