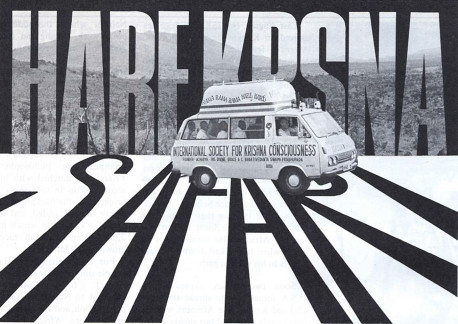 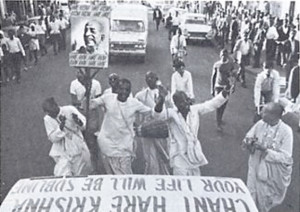 Their worldwide organization, the International Society for Krishna Consciousness, has already established its first centre for Africa at Nairobi, the capital of Kenya. Within six months of their arrival, the Hare Krsna people have bought their own gaily decorated truck which is a traffic stopper wherever it goes, purchased their own temple to accommodate the devotees, organized a five-day festival in the biggest sports stadium of Nairobi and now are promoting their ideas from a pavilion at the First All-Africa Trade Fair.

And what’s far more significant, ISKCON has already won its first African devotee, who was recently initiated as a brahmacari by the founder-acarya of the movement, His Divine Grace A.C. Bhaktivedanta Swami Prabhupada. About a dozen other Africans have also joined the movement. 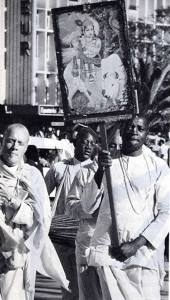 Last August, two ISKCON devotees arrived in Kenya for the first time. After a few days in the port of Mombasa, they were invited at the Krsna temple in Nairobi to participate in the Janmastami function. They pulled in huge crowds when the word spread the Americans had become svamis and were promoting the awareness of Lord Krsna.

The local Hindus turned up in hundreds every day to listen to them and went away impressed with the grasp on Gita of Svami Brahmananda, an American teacher from New York who was formerly called Bruce Scharf.

He made it clear that he had not only come for the local Hindus but for the Africans. He turned a lot of heads when he walked down the main streets in his saffron garb. 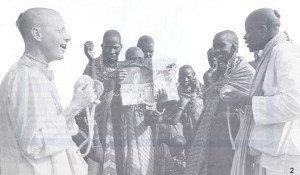 Members of Kenya’s Masaitribe in the Ngong Hills receiving the message of Krsna with great interest.

Soon two “black sadhus” from U.S.A. joined him to spread the word of Lord Krsna. The Africans were at first merely intrigued but slowly began to take interest in what the sadhus sang and danced about. The words were easy, the tune was basic, and they began to hum “Hare Krsna, Hare Krsna.”

Soon the chanting was heard for the first time in African residential areas of Nairobi where the sadhus paraded every week, singing and teaching the great “mantra” for salvation. 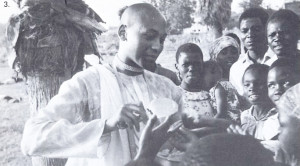 Then their guru, Srila Prabhupada, arrived in Nairobi. At the airport, almost everybody stopped work when they saw white sadhus lying at the feet of their guru to greet him. It was a unique “happening” for Kenya.

A Hare Krsna presentation at the University of Nairobi was the highlight of Srila Prabhupada’s visit. The unimpeachable philosophy of the Vedas was matched with impeccable showmanship in sankirtana. A movie projected in the background took over where the talk ended, and it went on during a kirtana in which more than 2,000 listeners of all races in the crowded hall joined in. 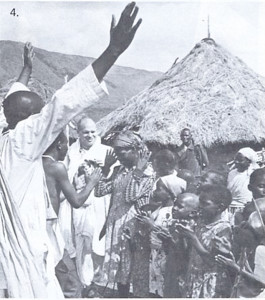 Children chanting in the Ngong Hills.

For this January, the Hare Krsna people announced their most ambitious project: a five-day festival. The guru returned to Nairobi to similar scenes of adulation, and the festival interested many more Africans. A 108-page magazine, “Back to Godhead,” was published in English and Swahili.

The Kenya Minister for Education, Mr. Taita Towett, in a speech read for him, said, “Many people today, as always throughout the ages, are asking the question. ‘What is the ultimate end of life?’ Your movement offers one answer to this question, based on the ancient Vedic scriptures. 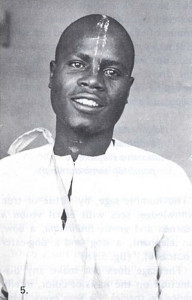 Roberts Cyril Lwangu Prabhu, first African disciple of the Hare Krsna movement. Asked by a reporter why he joined, he replied: “To serve God, I saw these people preaching, heard them, got to know them and decided to become one of them”

“Your moveinent, like all the great religions of mankind, teaches that all men are brothers, because we have one Father, who is God. If this basic teaching is followed, then religion can be a strong unifying influence. As Minister for Education, I can say that this is the attitude which we wish to teach our young people. They should all regard each other as brothers. In this way we are building a strong and united Kenya.”

About 80 1ocal Indians have become life members by contributing Shs. 1,111/-, and many more support the movement. They feel that this is a sorely needed ideology to be publicized amongst the Africans to tell them about their religion and way of life and to break down barriers of religion and race.

Roll on, the Sankirtana Safari. 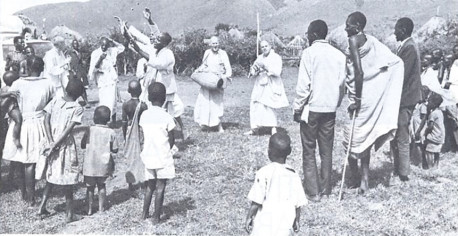