If there’s one thing His Divine Grace A.C. Bhaktivedanta Swami Prabhupada taught his disciples, it was to publish as many books as possible on the science of Krsna consciousness and to distribute them profusely. It seems they’ve taken his instruction to heart. Not only did they distribute a total of more than ten million pieces of transcendental literature last year, but in an end-of-year flurry of publishing they also came out with five new important books.

Foremost among these are two new translations of Srila Prabhupada’s Bhagavad-gita As It Is. In Calcutta, the East Indian division of the Bhaktivedanta Book Trust (BBT), under the direction of Srila Jayapataka Swami, published a unique Bengali edition. It comprises Srila Prabhupada’s Gita-gana, a poetic Bengali rendition of the Bhagavad-gita originally published in 1962, along with his unabridged commentary, translated from English into Bengali by His Holiness Bhakti-caru Swami.

In Los Angeles, the Spanish division of the BBT, under the direction of His Holiness Radha-Krsna Swami, has begun publishing a three-volume Spanish Bhagavad-gita As It. Is. Rendered into Spanish by Virabahu dasa and ornately designed by Rohini-priya dasa, Volume One contains the first four of the Bhagavad-gita’s eighteen chapters. So well has the new book been received in Mexico and South America that the first printing of 115,000 is nearly sold out.

In the Far East, the Hong Kong division of the BBT has published a Chinese version of Srila Prabhupada’s Easy Journey to Other Planets. This book, originally published in India in 1960, was one of the first books Srila Prabhupada wrote and the first to appear in print. Written as the space race was starting to heat up, it presents Krsna consciousness from an angle that reflects the breaking scientific news of the day. In addition to an all-Chinese edition, the Hong Kong BBT published a bilingual edition for the libraries that serve the growing number of Chinese-speaking people who are studying English.

Recently, the Journal of the American Academy of Religion favorably reviewed the first two volumes of Srila Prabhupada’s biography, noting that the author’s admitted attachment as one of the early disciples initiated by Prabhupada is the work’s chief strength, enabling him to present the careful reader with a true picture of Srila Prabhupada. “It was the view of Swami Bhaktivedanta, shared by the author of his biography, that a purely academic study would miss the subtle and esoteric meanings contained in the life of a pure devotee,” the review said.

The last of the new books is Mechanistic and Nonmechanistic Science, by Dr. Richard Thompson (Sadaputa dasa). Published by Bala Books under the direction of Yogesvara dasa. Mechanistic and Non-mechanistic Science makes a carefully reasoned and well documented case that the prevailing theories of physics and biology have grave shortcomings, which can be traced to their reliance on an underlying mechanistic framework. Arguing that valid scientific theory does not have to be mechanistic, Dr. Thompson outlines the non-mechanistic science of Krsna consciousness and shows how it complements mechanistic science and completes our understanding of reality.

Readers interested in any of the new publications may address their inquiries to the BACK TO GODHEAD editorial offices. 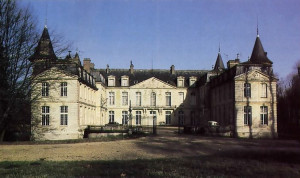 Ermenonville, France—In the Ninth Century, a French priest named Irminon made this medieval village fifteen miles north of Paris the site for his retreat. In the Tenth Century his property passed into the hands of the Bouteiller family, descendants of Charlemagne, and from them to successive generations of French aristocracy. In 1351 Guillaume IV Ie Bouteiller sold the estate to a member of King Philippe VI’s retinue, who expanded the premises and added a protective moat. Successive owners added their particular contribution to the Ermenonville chateau, which served as a summer resort for French nobility until it was replaced in popularity by the famous Versailles Palace. Guests of the chateau included Jean Jacques Rousseau (who made it his final meditative retreat) in 1778; Marie Antoinette in 1783; and Napoleon Bonaparte in 1800. Other notables to have lived at Ermenonville were Joan of Arc, Louis XI, Henry IV, and Benjamin Franklin.

In 1981 the International Society for Krishna Consciousness (ISKCON) completed negotiations for the acquisition of the Ermenonville Chateau, which now serves as ISKCON headquarters in France, complementing its rural asrama in Valencay and its reception center and restaurant in central Paris.

Sensitive to the property’s historic value, ISKCON administrators have decided to retain the traditional French decor. Devotee artists and craftspeople have begun renovating the sculptured walls and parquet interiors of the chateau’s eighty rooms. In its finished form the chateau will house a museum of traditional Indian bas relief work, devotional crafts displays, an art and photographic gallery, a vegetarian restaurant, and a radio station.

The village itself is a busy tourist attraction, receiving upwards of twenty thousand visitors each weekend in warm weather. Devotees have planned to accommodate the crowds with picnic baskets full of prasadam (vegetarian food offered to Krsna), concerts of devotional music, multimedia presentations on Krsna conscious themes, and boating on the property’s fifteen-acre lake. 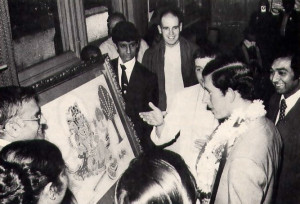 During a visit to the Hindu Cultural Centre in Preston, England, His Royal Highness Prince Charles received a painting of Lord Krsna and His consort Srimati Radharani from Mr. Chotu Pattni, a leading member of the Krsna consciousness Society in Great Britain. Madhavendra Puri dasa explained the painting to the prince and later presented him with Volume One of Srila Prabhupada-lilamrta, the biography of His Divine Grace A.C. Bhaktivedanta Swami Prabhupada.

He told TV newsmen, “Many leaders today lack moral and spiritual qualities because they do not know the subtle laws of nature by which God governs the world. I hope that my initiation will help me increase my knowledge of God and improve my spiritual qualities so I can give moral support to the people I work with and help them work together effectively.”

Before heading up the ILO Mr. Adossama was that organization’s regional director for fifty African nations, and before coming to the U.N. he served as the prime minister of Togo, where he had previously held the posts of Minister of Education, Minister of Labor, Minister of Foreign Affairs, and Minister of Finance.